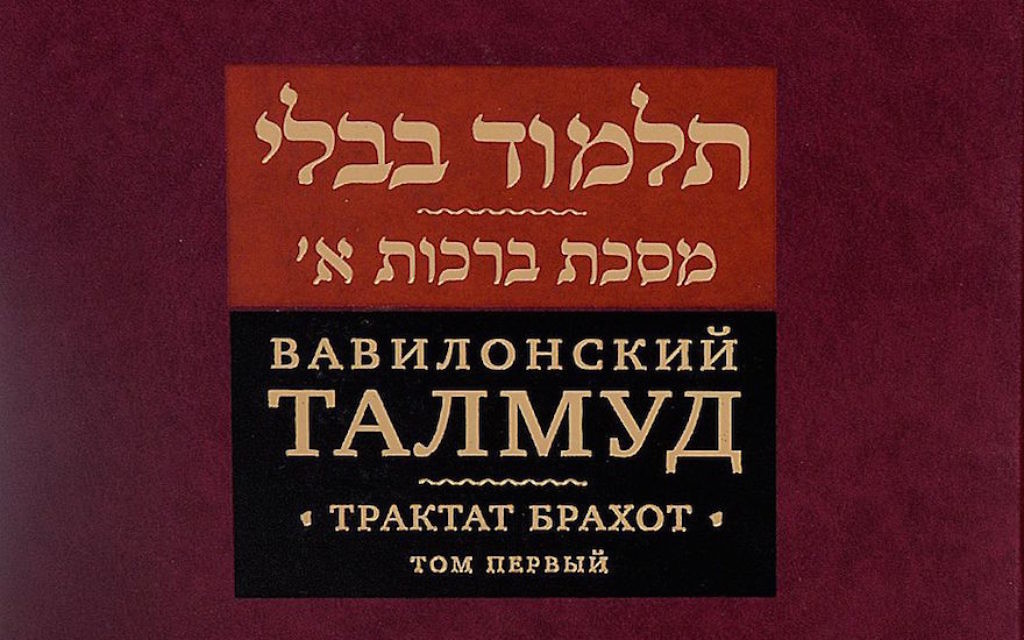 (JTA) — A century ago, passages from the Talmud were translated into Russian to be used as evidence in the anti-Semitic show trial of Menahem Mendel Beilis, a Jew charged with — and eventually acquitted of – murdering a Christian boy.

The prosecution in that 1915 trial, which was decried internationally for its resemblance to medieval blood libels, cherry-picked quotes from the Talmud, a central text of Orthodox Jewish tradition, to argue that Beilis had killed the boy for religious purposes.

Now the Talmud is again being translated into Russian. But this time it was done in full and with scholarly annotations as part of one Moscow-based Jewish publishing house’s ambitious plan to make the text more accessible to a readership of 260 million Russian speakers worldwide.

After several years of work, the Knizhniki publishing house this year released the annotated Russian translation of two of the Talmud’s 63 tractates. Knizhniki and a partner commissioned the translation by a team of dozens of scholars, most of whom live in Israel, Boruch Gorin, Knizhniki’s chief editor and a senior aide to Russian Chief Rabbi Berel Lazar, told JTA.

The Talmud, a vast compendium containing over 5,400 pages in the original Hebrew and Aramaic, for centuries has formed the cornerstone of rabbinical education. It contains the teachings and opinions of hundreds of rabbis on the widest variety of subjects, including Jewish law, ethics, philosophy, customs and history.

Yet devout Orthodox Jews – a small minority among the 500,000 Jews that make up the largely nonobservant Jewish communities of the former Soviet Union – are not the readership that Gorin had in mind when he launched the Talmudic translation project, he said.

“The devout don’t need this translation, they’re already living and breathing the Talmud in its original language,” he said.

Rather the translation project is done with Russian intellectuals, including non-Jews, in mind. Gorin hopes to print about four tractates a year and to complete the entire project within a decade or 12 years.

“Russia is no exception to the global rekindled interest in spirituality and religion,” Gorin said. “Yet the fundamental text of Judaism had remained inaccessible to Russian intelligentsia, including the many Jews who are part of it, because of the language issue. This is the blockage the project is meant to lift.”

The translation project of the Talmud — the study of which in communist times was practically forbidden – is not a for-profit endeavor and was launched on donations, Gorin said. But with 1,200 shops selling Talmud and other translated Jewish texts across Russia alone, he insisted the endeavor has commercial value and is already paying for itself.

The Talmud translation is the latest addition to a growing series that Knizhniki launched eight years ago called the “Jewish Text Library.” It comprises more than 250,000 copies of formative Jewish texts, including the Chumash – the Five Books of Moses that form the nuclear text of the Jewish law and faith — and some of the writings of Maimonides.

Despite a relatively hefty price tag of approximately $50 a volume – roughly a tenth of the average monthly salary in Russia — the series became Knizhniki’s best-selling category to the surprise of the very people who decided on its launch.

“We were printing and, predictably selling quite nicely, volumes of Jewish fiction, literature from Israel and beyond when we launched the Jewish scripture series,” Gorin recalled. “The demand for the scripture series came as much from non-Jews as it did from Jews, and it has us printing second, third and fourth editions, so I believe this is a viable business structure.”

World fiction is a crowded market, he said. By contrast, “offering annotated Jewish scripture in Russian, conforming to scientific publishing standards, is something unique.”

Interest in Jewish scriptures in Russia is high because “of the understanding that even the secular Jewish culture of analysis and debate originates in Talmudic principles,” Gorin said. And considering the central role of Jewish philosophers on Russian literature and thought, “it’s also a part of Russian culture by proxy.”

In Russian, the series featuring the Talmud translation goes by the acronym BET, which is also the second letter of the Hebrew alphabet after alef.

Gorin, a Chabad rabbi, said it is an appropriate name for the scriptures project, which follows his movement’s opening of dozens of synagogues and Jewish schools across the former Soviet Union after the collapse of communism.

“Phase Alef of the Jewish revival of Russia is more or less complete,” said Gorin, who is the chairman of Moscow’s main Jewish museum and editor-in-chief of its highbrow Jewish weekly L’Chaim. The Talmud translation, he said, “has us continuing to grow well into phase Bet.”