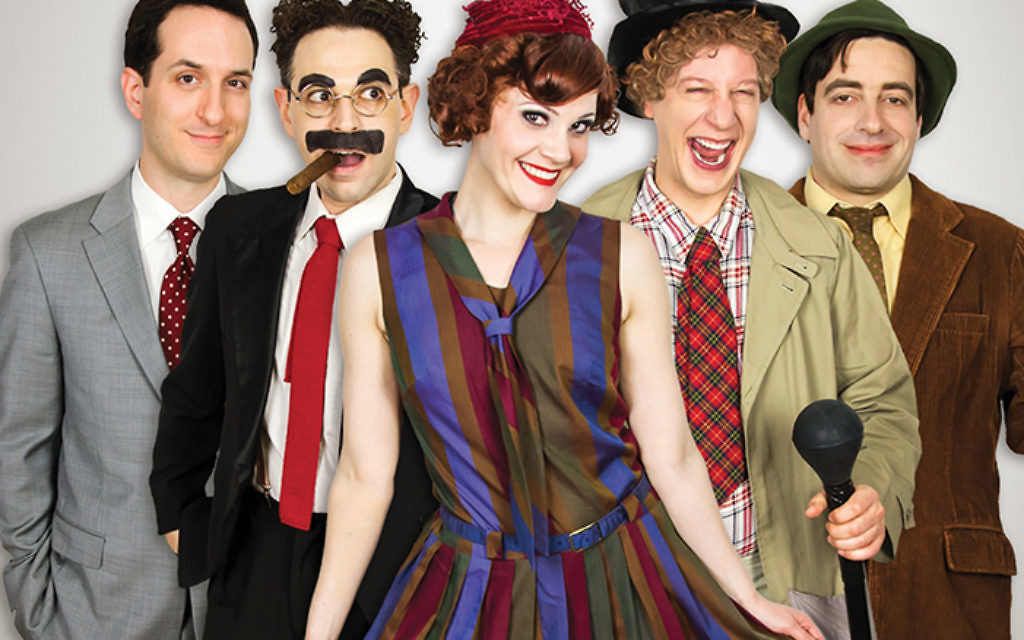 Before “Duck Soup,” “A Night at the Opera” and the other madcap 1930s films for which the Marx Brothers became internationally famous, they were already vaudeville superstars. They made the leap onto the Broadway stage in 1924 with a hit musical revue, “I’ll Say She Is,” about a rich girl who promises her hand to the suitor who can show her the most exciting time.

Now, after almost a century, “I’ll Say She Is” finally returns to the New York stage. Billed as the “lost Marx Brothers musical,” the show, directed by Amanda Sisk, starts performances this weekend in the East Village for a month-long run.

Written originally by Will B. Johnstone, with music by his brother Tom Johnstone, “I’ll Say She Is,” which ran for more than 300 performances. (Critic Alexander Woollcott of the New York Sun called the show a “bright colored and vehement setting for the goings on of those talented cutups, the Four Marx Brothers,” and he singled out Harpo in particular, calling the show a “splendaciously and reasonably tuneful excuse” for seeing him perform.) The show was a grab bag of Marx Brothers vaudeville routines, climaxing with a skit — much reprised in later years — in which Groucho played Napoleon, with his brothers surrounding him as his trusty advisers. But unlike their other two Broadway musicals of the 1920s, “The Cocoanuts” and “Animal Crackers,” “I’ll Say She Is” was never filmed and has been largely forgotten.

This new production premiered in 2014 at the New York International Fringe Festival.

The Off-Broadway run is the first fully realized revival of the show; it arrives when interest in the Marx Brothers is at a peak, with new books about them being published almost every year, the most recent being Lee Siegel’s “Groucho Marx: The Comedy of Existence,” released in January from Yale’s Jewish Lives series. (This may also be the summer of lost Jewish shows from the 1920s; the Folksbiene’s recent, glorious production of “The Golden Bride,” a Yiddish operetta by Joseph Rumshinsky, is about to have another month-long run in Lower Manhattan.)

Since the full script of the original production of “I’ll Say She Is” was not preserved, Noah Diamond, who plays Groucho, spent six years painstakingly recreating it from surviving fragments, published interviews with the Marx Brothers, descriptions and quotes in theater reviews, and songs from other shows by the Johnstones. The story of Diamond’s recreation of the show is told in his just-released book, “Gimme a Thrill: The Story of ‘I’ll Say She Is,’ The Lost Marx Brothers Musical, and How It Was Found” (BearManor Media, 2016).

In an interview, Diamond told The Jewish Week that his challenge was not just to find the skits that were performed in the original show, but also to create new material in the same style both for himself and for the other actors.

“I used to say that I would never do anything that Groucho wouldn’t do, but the essence of Groucho was that he was unpredictable,” Diamond said. “Groucho’s voice and walk were so distinctive that everyone can impersonate him to some degree. But his voice, which was the greatest instrument for comedy that the world has ever known, went up and down; it also veered from colloquial street talk to exaggerated gentility. And he was underrated as a physical comedian, with manic, spastic movements that came in spurts, even while he was half floating — stiller and slower than we remember, with limbs freely circulating around his body.”

Diamond hopes that members of the audience will “forget that it’s 2016 and imagine that they are seeing the young Groucho making his Broadway debut.” He added that he “loves seeing this material in front of an audience; it’s a reminder that the Marx Brothers’ act was meant to be done live.”

Seth Shelden, an attorney and law school professor as well as actor, plays Harpo. He said that many people have viewed the Marx Brothers in Freudian terms, seeing Groucho as the superego of the group, Chico as the ego, and Harpo as the id. “I walk around most of my life with my id in a tight little box,” he said. “It’s appealing to be able to take it off.” Unlike Groucho, who spawned generations of wisecracking comedians, Harpo, he suggested, “has no analogue in modern times — there is no one who has followed in his footsteps.”

When he performed as Harpo in the Fringe Festival production, Shelden recalled, he had some trepidation that people would expect that his performance would mirror that of the real Harpo in every detail. But he realized that because “I’ll Say She Is” was never filmed, he is free to put his own stamp on the role. “I’m pulling out the essence of what was inspiring about the character,” he explained.

Trav S.D. is a vaudeville historian who has been involved with the project since its inception; he both produced and directed the Fringe Festival production. He pointed out that vaudeville “went wildly out of fashion and now is creeping back,” with burlesque, circus-style entertainment and variety shows flourishing again. Improv comedy gave birth to “Saturday Night Live” and other television sketch comedy, he noted. But “Saturday Night Live,” he insisted, is “the opposite of vaudeville — it’s smart, sexual and socially revolutionary” compared to vaudeville’s slapstick and lack of sophistication.

Nevertheless, according to Stephen Whitfield, a professor at Brandeis who is an expert on American Jewish culture, the Marx Brothers’ fame lives on. Unlike Buster Keaton, Eddie Cantor, Jack Benny and other comedians of the early to mid-20th century, “large numbers of people would still recognize them today.”

The Marx Brothers’ legacy, Whitfield conjectured, resides in their “in-your-face comedy, in which lines of decorum, etiquette and propriety are extremely blurred.” These boundaries, he said, have been “demolished by Donald Trump, by people who troll (deliberately, to provoke other people’s ire) on the Internet, and so on.”

Comedy, Whitfield pointed out, needs to push the envelope in order to seem fresh. “The Marx Brothers pushed farther than anyone,” he said, “including Charlie Chaplin, to flout respectability, to demolish any sense of dignity.”