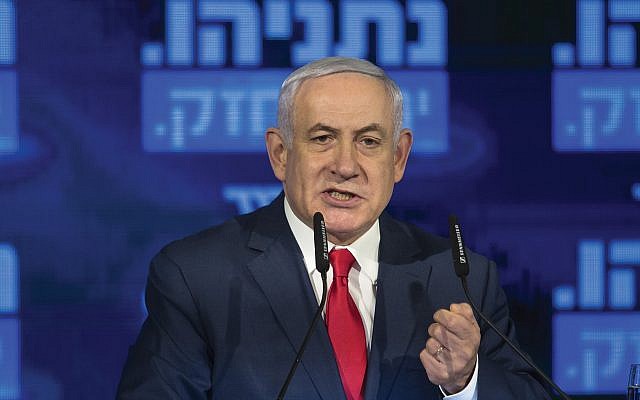 New poll cites Benjamin Netanyahu as not handling Israel-diaspora well, but Israelis trust him more than his challengers to guide the relationship. Getty Images

Although Israelis clearly recognize the friction between the current right-wing government of Israeli Prime Minister Benjamin Netanyahu and diaspora Jewry, a recent poll found that fully one-third would “trust” him to “best run the relationship with the American Jewish community” in the next government, handily beating all of the other major candidates running in the April 9 election.

Netanyahu received 32 percent of the vote in a poll of 500 Israeli voters commissioned last month by the Ruderman Family Foundation, compared to just 8 percent for Naftali Bennett, 2 percent for Tamar Zandberg and 1 percent for Avi Gabay. The two men favored by the polls to win the election, Benny Gantz and Yair Lapid, received just 11 percent and 13 percent, respectively.

In the hours after this poll was conducted last month, Gantz and Lapid announced that they were joining forces and running together in the newly created Blue and White party. Aaron Kalman, a program officer at the foundation, said in an email that he does not believe “the results would change much” were the poll conducted today.

“Those who support Netanyahu and his coalition will still view him as the favorite, those who want an alternative will look to Gantz/Lapid … .” he wrote.

The Ruderman survey found also that fully 95 percent of Israeli Jews from across the political spectrum believe Israel has a “moral obligation to maintain its relationship” with diaspora Jewry, and specifically with the American Jewish community. But precisely why is unclear. Some 34 percent cited helping Israel’s economy as American Jewry’s main asset to Israel, 13 percent cited security, 21 percent said diplomacy, and 20 percent cited morals/values.

The poll by the Dialogue polling company found also that only 45 percent of Israeli Jews believe the current Israeli government has done a good or excellent job in its overall management of relations with the American Jewish community. In fact, only 57 percent believe the relationship is currently in a good place, and 43 percent gave Netanyahu an excellent or good rating in managing that relationship.

This poll appears consistent with another commissioned by the foundation last October that found about half of Israelis believe Netanyahu has not done enough to strengthen relations with the American Jewish community.

Although only 28 percent of those in the new poll gave Netanyahu low and failing marks in his management of relations with the American Jewish community, fully one-third of Israelis believe the government of Israel “bears most responsibility for the crisis between the government of Israel and U.S. Jewry over the Western Wall compromise.” Only 13 percent put the blame on U.S. Jewry and another 21 percent blame both sides equally.

(The Western Wall compromise would have altered the layout of the Western Wall Plaza in a way that would have granted tacit recognition of the Reform movement at the holy site. Netanyahu unilaterally canceled the compromise after objections from his right-wing coalition, sparking outrage from diaspora Jewry.)

Jay Ruderman, president of the Ruderman Family Foundation, which is committed to bridging the gap between Israelis and the American Jewish community, said in a statement that “with elections around the corner, Israelis must demand politicians talk about this issue and commit to strengthening the relationship.”