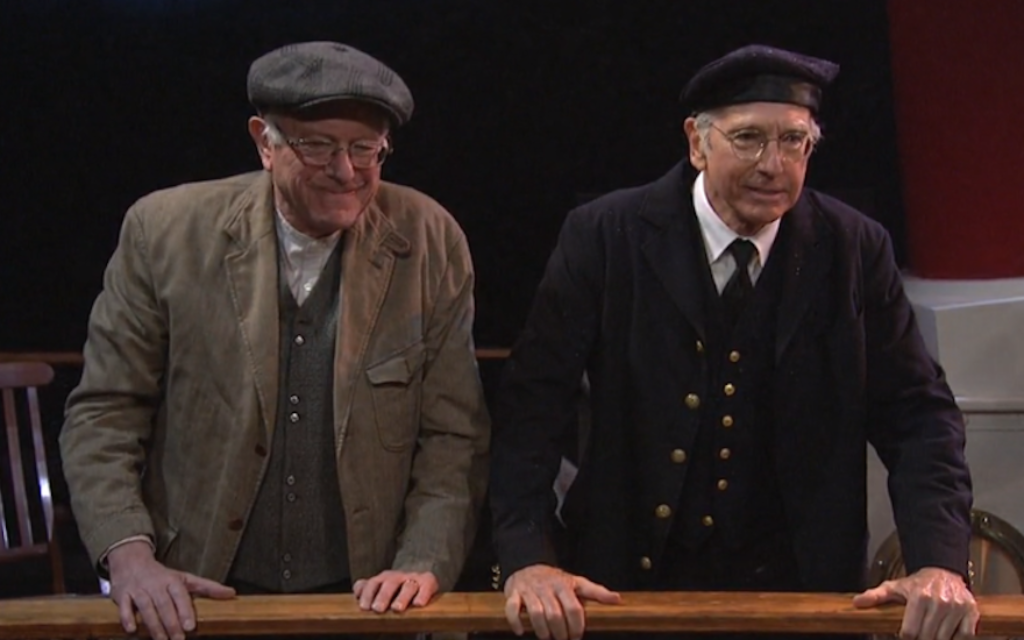 In running for the Democratic presidential nod, Sanders has not shied from his doppelganger. He told CNN’s Anderson Cooper this week that he is, in fact, Larry David, and his campaign has used the comedian’s Sanders impressions for votes and money.

In “Bern Your Enthusiasm,” a take on David’s HBO series, “Curb Your Enthusiasm,” David’s Sanders loses the Iowa caucus by a hair’s breadth (as the real Sanders did), because on the last day of voting, he alienates five voters — enough to hand Hillary Rodham Clinton the state.

Sanders and David later appear together on stage to throw over to the night’s musical guest. Asked by David about his lead in New Hampshire, Sanders replies with his version of the famous “Curb Your Enthusiasm” line: “It’s pretty, pretty, pretty, pretty good.”

In their final rendezvous of the night, Sanders and David both play turn of the 20th century Jewish immigrants on a ship bound for Ellis Island. They sound and look alike, down to their outfits.

But they have fundamentally different outlooks. Sanders’s character can’t wait to land and begin exposing income inequality. David’s, spooked by a squall, balks at the captain’s order to save “women and children first,” demanding to check the “pubes” on a child boarding a life raft.

Sanders’ character doesn’t hold himself apart from his fellow passengers.

“I’m Bernie Sanderswitzky,” he says. “We’re going to change it when we get to America so it doesn’t sound so Jewish.”

It’s a sly, self-deprecating nod to Sanders’ reluctance — until very recently – to speak about his Jewish background and upbringing.

But it also goes to American Jewish ambivalence about Sanders’ campaign.

Who do American Jews more identify with: The idealist who would conceal his Jewishness; or the realist — and survivor — who knows his Jewishness will inevitably out?