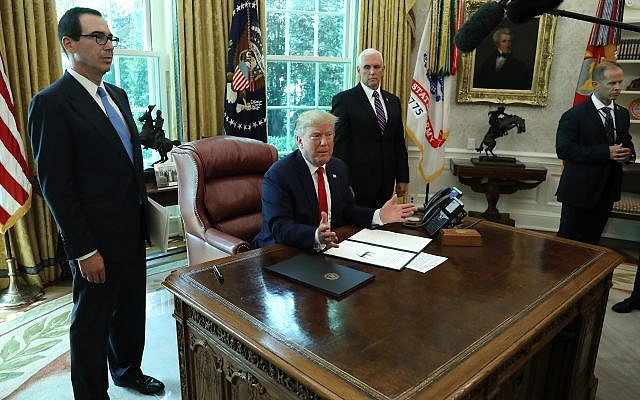 Donald Trump’s unpredictability finally — and seemingly out of the blue — landed at Israel’s feet this week, like an errant rocket from Gaza that found its mark.

For more than two years, the Jewish state has seemed immune from President Trump’s wild policy swerves. From moving the U.S. embassy from Tel Aviv to Jerusalem, to recognizing Israel’s sovereignty over the Golan Heights to cutting off Palestinian aid, Trump’s tilting toward Israel in its conflict with the Palestinians has seemed a rock-solid proposition.

This week, on two crucial fronts for Israel — Iran and Jared Kushner’s peace/economic plan for the Israelis and Palestinians — Trump seemed to shift the ground the Jewish state has been so confidently standing on. In terms of Iran, Trump handed critics of Israel’s policy in Gaza a “cocked and loaded” counter-argument when he uttered the “p” word — “proportionality” — to explain why he pulled back at the last minute from launching attacks on Iran in response for its downing of an unmanned drone. The planned strikes, he said, were “not proportionate.”

And in terms of Kushner’s peace plan, it suggested, in careful but suggestive language, that Israel’s actions in part have had the effect of strangling the Palestinian economy. Is it setting the stage for painful concessions on Israel’s part?

Taken together, the moves are a one-two punch for Israel, which has come to feel protected from Trump’s policy swings, as if the president is the Washington bureau chief for the Israeli government.

When it comes to the IDF’s actions in Gaza, Israel is constantly battling to stop the idea of proportionality from being hastily cited by non-experts, and turned into a yardstick by which any critic with a social media account feels able to judge decisions taken in tense situation rooms.

Next time a large crowd of protestors gathers on the Gaza-Israel border and things get as heated as they did last May 14 when dozens of Palestinians were killed in a single day, we will see the normal routine of Ramallah, Ankara and numerous human rights groups decrying alleged Israeli disproportionality.

But they will have the added weight of a precedent from President Trump, one that was echoed by Vice President Mike Pence, who also said that strikes were halted because they didn’t constitute “a proportionate response.”

Israeli spokespeople will say that the concept is complicated. They’ll point out that protestors were acting violently, and that combative demonstrators tried to breach the border, which could put Israelis in danger.

They will say similar things when rockets next fly from Gaza to Israel and the air force retaliates against terror targets in Gaza and civilians are killed. They will say that even if the projectiles were fired to open areas, a military response is needed to uphold Israel’s deterrent power and in the long-run protect civilians from unchecked aggression.

Israel’s message has always been that the proportionality calculation isn’t a DIY decision based on a formula that is available to all, but rather a complex one that takes place based on various different factors, many of which need to stay secret.

Next time around, Israel’s critics may assert that even Trump has a better hold on proportionality than Jerusalem does. They will say that Trump illustrated its importance in decision-making and taught that it’s a common-sense equation.

Trump’s comment about proportionality isn’t the only aspect of his U-turn on Iran that should unsettle Israeli leaders. From the moment that Trump became a serious contender for the presidency, there was discussion about his unpredictability. The wise advised officials in Jerusalem not to be lulled into a false sense of security by a tycoon who can quickly change his mind.

But Israelis have, to a large extent, opted for feeling they are safe in Trump’s hands. Feel-good gestures like moving the embassy and recognizing Israeli sovereignty over the Golan Heights have been big hits. Trump’s exit from the Iranian nuclear deal has been seen as important — and silenced important questions about U.S. policy in Syria, and the on-and-off withdrawal of U.S. troops.

It’s a feeling that U.S. National Security Adviser John Bolton tried to keep strong during his Jerusalem visit this week. “Neither Iran nor any other hostile actor should mistake U.S. prudence and discretion for weakness,” he said. Meanwhile, Trump was working on new sanctions that target Iran’s supreme leader Ayatollah Ali Khamenei. In fact, new economic sanctions were put into place on Monday, ones that bar Iranian leaders from access to financial instruments, according to The New York Times.

Did Israel desperately need to see this strike? No. But the saga we just witnessed should be a reminder of who Trump is — a volatile politician who is first and foremost focused on domestic agendas.

Both Palestinians and Israelis would do well to remember the unpredictable nature of Trump when rushing to pass judgment over the new peace plan launched this week in Bahrain.

Fatah, the strongest Palestinian political party, is calling the proposal “Zionist-American terrorism,” and the senior Palestinian Authority (PA) politician Hanan Ashwari said that the plan is “all abstract promises.” The PA’s Foreign Ministry claimed that the plan tries to “whitewash the occupation and settlements.”

Palestinian leaders dismissed the first part of the plan, just made public and discussed at a Bahrain workshop, for dealing with only economics and not political aspirations. Meanwhile, politicians on the Israeli right are humoring Trump, seemingly convinced that the plan won’t lead to any real concessions on their part.

Writing in The Times of Israel about the plan, Raphael Ahern cited the following passage, which he suggested was a possible sign that concessions from Israel might be in the cards:

“According to Blue and White co-leader Yair Lapid, this part of the plan is a ‘direct message to the Israeli government that it will also have to make some serious concessions,’” Ahern continued. “Lapid wrote on Facebook: ‘We need to make clear in advance that any concessions are conditional upon the freedom of action of the IDF in the West Bank remaining intact.’”

The Palestinians say that based on the Trump administration’s actions in the region so far it can’t be trusted with Palestinian interests. For them, Trump’s unpredictability may bring pleasant surprises. Israelis may be in for surprises of their own when they see the political part of Trump’s Middle East plan, if they learn that they are expected to make hard compromises.

Remember, way back during the 2016 presidential campaign, when then-candidate Trump suggested that the U.S. had to reflect an “evenhandedness” when it came to the Israeli-Palestinian conflict? And remember when he suggested that there would one day be a stick to balance the carrot that was moving the U.S. embassy to Jerusalem?

It’s important to remember that the United States and Israel have a great many mutual and intersecting interests when it comes to Iran and the Palestinians. The first two years of the Trump administration have been an illustration of that. But this week, like the topsy-turvy plotlines on “The Apprentice,” Israelis would be wise to appreciate that with Trump, what you see isn’t always what you get.