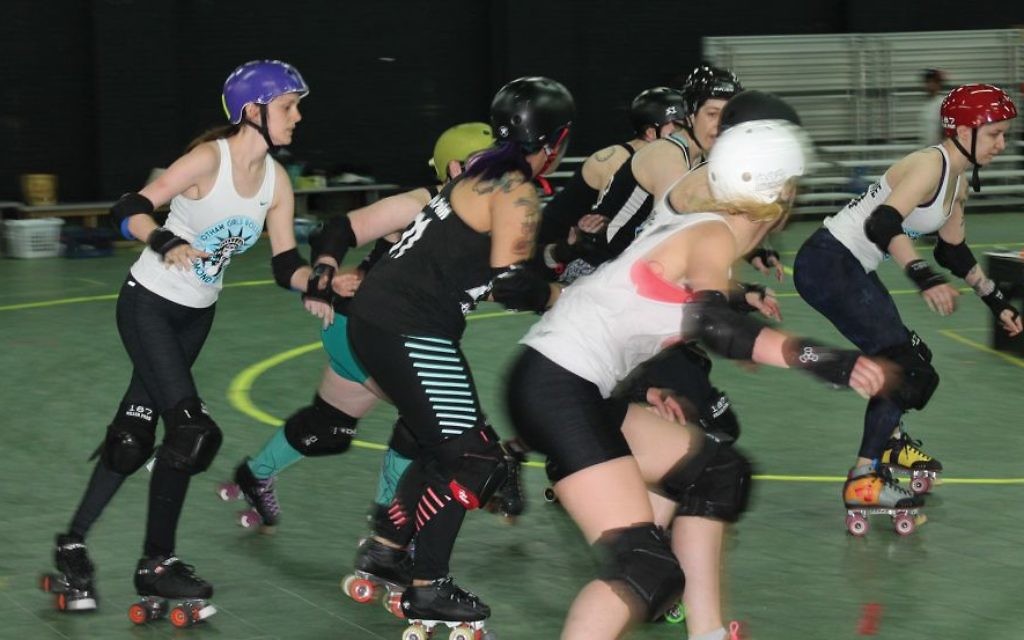 A recent practice in Williamsburg: Wearing religion on their pads. Hannah Dreyfus/JW

If you want to play roller derby, you better get comfortable with getting knocked down.

The same goes for being Jewish, said Gotham Girls roller derby skater Dara Fineman, who goes by the treif but lovably campy moniker Hebrew Ham Lincoln on the track.

“To play derby, you have to be tough. You have to have a thick skin, so you can get back up again when you fall down,” said Fineman, 28, who joined the Gotham Girls league in February. “Those are Jewish traits. As a people, we fall down but we keep surviving.”

“To play derby, you have to be tough. You have to have a thick skin, so you can get back up again when you fall down… Those are Jewish traits. As a people, we fall down but we keep surviving.”

Fineman — who paints a Star of David over her left eye — is not the only player to proudly sport her Judaism on the oval. The 102-player league, which is ranked No. 1 in the world by the Women’s Flat Track Derby Association, has a particularly high number of Jewish players, according to a team representative. About a dozen players identify as Jewish.

“It’s really a very Jewish sport,” she said, speaking to The Jewish Week during a recent Sunday morning practice at the team’s practice rink in Williamsburg. “You find a place where you’re encouraged to play and yell as opposed to being quiet. We [Jews] are not quiet.” 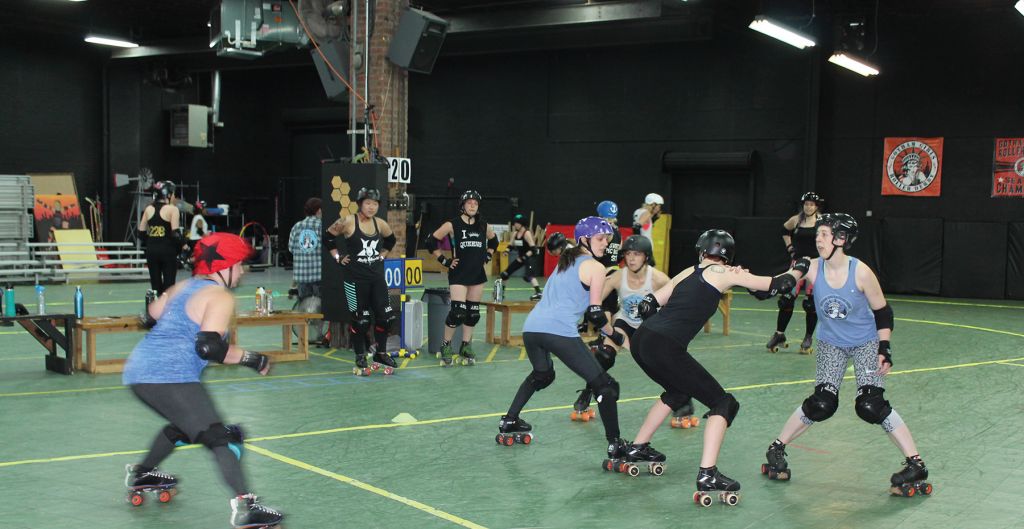 A jammer approaches a wall of blockers. Hannah Dreyfus/JW

“There are so many Jewish skaters on the track that we’re like the Wailing Wall,” quipped Gaby Kupfer, a proudly Jewish player who skates for the Bronx Gridlock and the Wall Street Traitors.

“It’s really a very Jewish sport… You find a place where you’re encouraged to play and yell as opposed to being quiet. We [Jews] are not quiet.”

Roller derby, a contact sport in which two teams of five players skate counter-clockwise around an oval track, is anything but quiet. A team consists of one “jammer” and four blockers: the jammer scores point by getting past the opponent’s players; blockers try to keep the other team from scoring. The game includes “grand slams,” “hip whips,” pivots and plenty of penalties, and it can get aggressive quickly.

In recent years, the popularity of the sport, which is dominated by all-female amateur teams, has risen significantly. Today, the WFTDA, roller derby’s international governing body, has nearly 400 member leagues, including a team in Israel called the Tel Aviv Derby Girls.

A recent Sunday morning practice found several different New York teams — including the Brooklyn Bombshells, Manhattan Mayhem and the Queens of Pain — scrimmaging on the track in Williamsburg. Colorful graffiti decorates the otherwise unmarked building. From outside, the screech of skate brakes and blowing whistles are clearly audible.

“The [Gotham Girls] league prioritizes the athletic narrative,” said Kupfer. “This is not the fake superhero thing.” 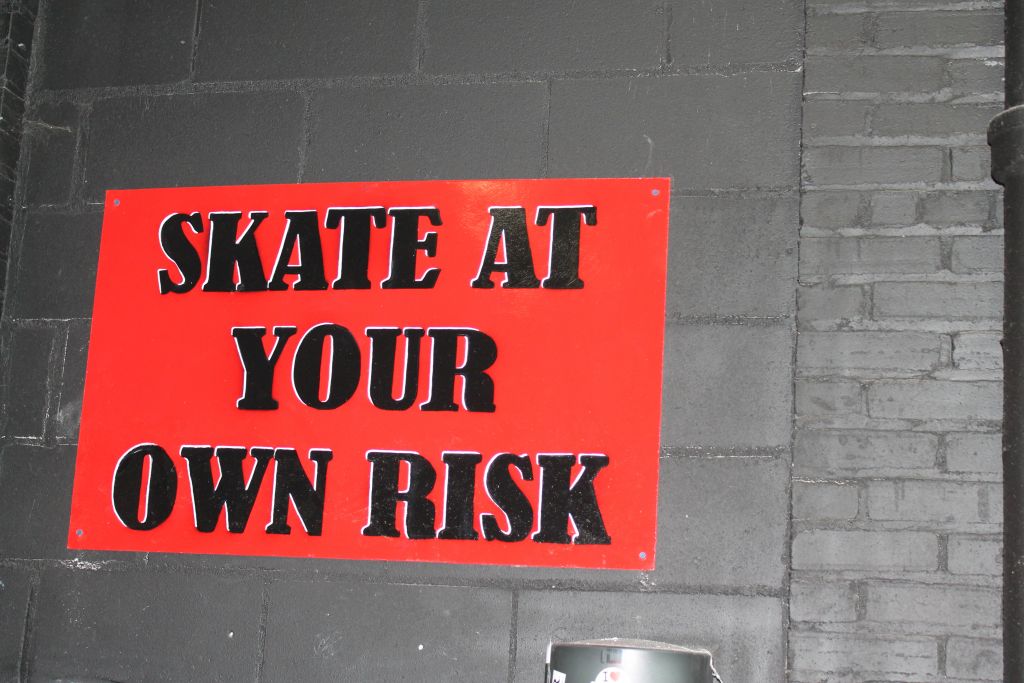 For Kupfer, the league has become her own unconventional Jewish community.

“Skating in New York has allowed me to connect with other Jewish women,” she said. Kupfer grew up in Milwaukee. The daughter of an Israeli father (“my dad was a soldier in the Six-Day War”) and an Orthodox mother, she attended Modern Orthodox Jewish day schools through middle school. “Judaism has been an important part of my life since then.”

Granted, Kupfer has found some creative ways to stay connected. Her first skater name was L’Chaimlyck ManuvHer, after her signature move. “It’s where I hit someone so hard that they either choke or say cheers.” When she started skating in 2010 for the Oakland Outlaws of the Bay Area Derby, her “derby wife” went by the name Fatal Dreidel — the number on the back of her jersey was “8 Crazy Nights.”

“We were two nice Jewish girls, what else could we do?” said Kupfer. (Fatal Dreidel has since retired from skating “but her strong Jewish mama work ethic still inspires me,” said Kupfer.)

Today, Kupfer’s derby name, Vera Toss (a clever play on Veritas, the Goddess of Truth), is inspired by her unabated search for, well, truth.

“I’m very truthful all the time — if there’s a problem, I’m going to point it out,” she said. “That’s totally my Jewish background.”

Plus, she added, the pithy catch-phrases that go along with the name add flavor. “‘You can’t handle the truth,’ ‘Turn around and face the truth,’ ‘The truth hits everybody’ and so on,” she said.

Kupfer’s favorite biblical character is Esther from the Purim story. “You’ve got a badass Jewish woman saving her people — what’s better than that?” 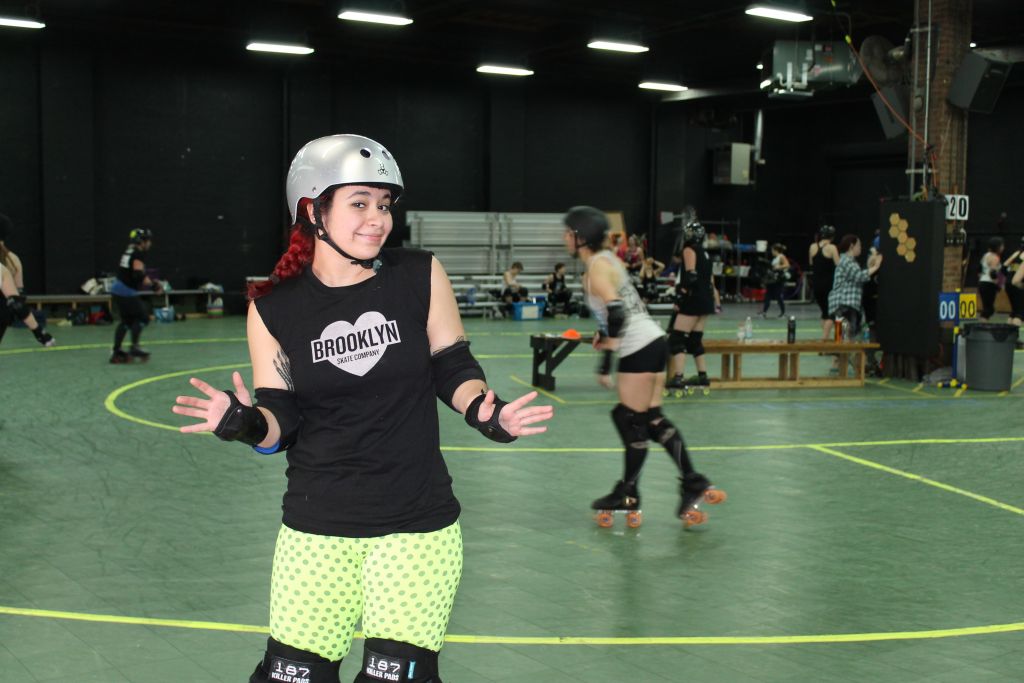 At 49, Marcy Langstein — or Whiskey Lullabye — is the oldest skater in the league. Though her mother has still never seen her skate — “she’s a little terrified” — Langstein was inspired to become a skater by the strong female role models in her family.

“Most Jewish families won’t say ‘That’s awesome!’ when you tell them you’re going to play roller derby,” said Langstein, who grew up in Bellmore, Long Island before moving to Riverdale at age 6. Today, she lives in Bushwick. “But I was raised by strong, powerful women — my family made me feel like I could step onto the track.”

Langstein — who is in her eighth season of derby — recalled choosing to have a bat mitzvah. At the time, her family attended Rabbi Avi Weiss’ synagogue, the Hebrew Institute of Riverdale.

“Who doesn’t want the rabbi who keeps getting arrested?” Langstein quips, referring to Weiss’ several high-profile protests. “That’s the rabbi I want!”

“Owning your identity is a big part of roller derby. I’m trying to do the same with my Jewish identity.”

Though today Langstein observes little religious practice — “I’m a terrible Jew, just ask my mother” — she continues to fast on Yom Kippur. “Something in my brain keeps telling me I have to,” she said. “I’m sure there’s something I need to atone for.”

Of her many tattoos, Langstein has one small tattoo on her shoulder that reads “Chai” in Hebrew. Another, on her arm, depicts birds flying away from barbed wire. She explained, “There are always ways to set yourself free from the things in life that keep you chained.”

Joanna Acevedo, 20, one of the youngest players in the league, is looking to derby to help reclaim her Jewish identity.

“I want to be able to say ‘this is who I am’,” said Acevedo, an undergraduate studying art and writing. “Owning your identity is a big part of roller derby. I’m trying to do the same with my Jewish identity.” 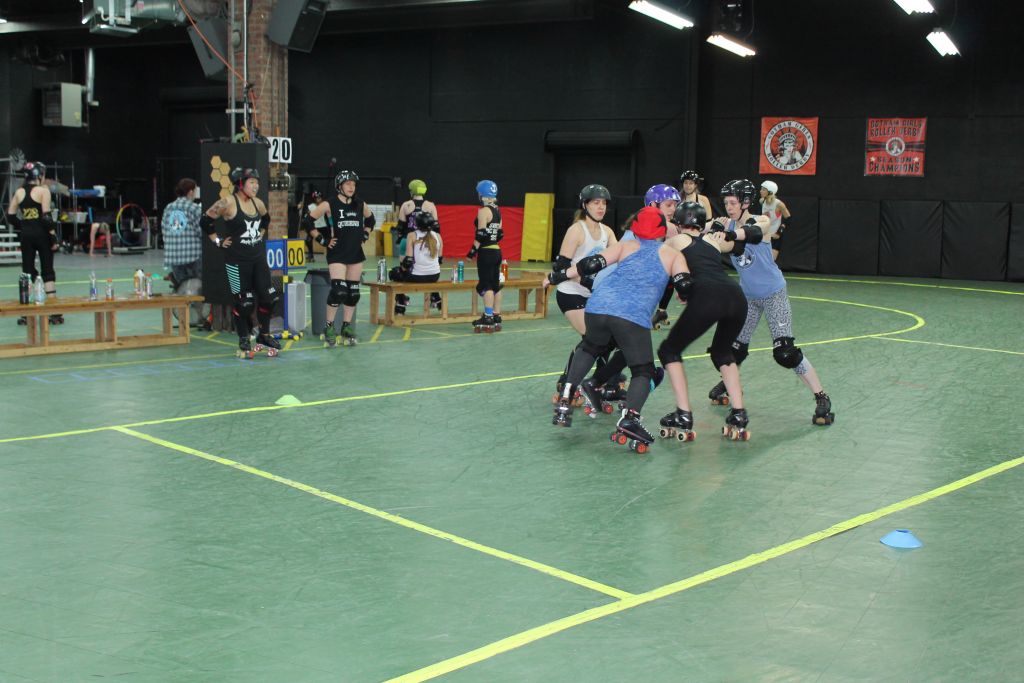 A jammer approaches a wall of blockers. Hannah Dreyfus/JW

Acevedo, who is Jewish on her mother’s side — “her last name is Finkelstein, which is about as Jewish as it gets” — started skating in junior derby at age 8; she picked her derby name, Mercy Killer, at age 15. She sees herself playing derby until she’s “at least 35.”

On the track, she describes her style as “casual and cool. I can be very hot-headed, but I very much try not to be,” she said. “I try to be smart about my game plays.”

She recalled telling her mom, whom she described as a “really classic Upper West Side, old-school New York Jew,” that she wanted to start to play roller derby. After taking a friend’s extra ticket and watching her first match, “I called up my mom and said, ‘Hey, Mom — I’m going to play roller derby.’ She said, ‘You don’t even know how to roller skate.’ I said, ‘Well, I’m going to learn.’”

When Fineman, who grew up in Los Angeles, told her family she wanted to join a roller derby team, they were not surprised.

“It was probably the least surprising thing I ever told them,” she said, laughing. Hebrew Ham Lincoln is now a deep part of who she is. “This loud, brash character allowed me to be a bit bigger than I am in real life,” she said. “I’ve always been so loudly Jewish. It felt right.”