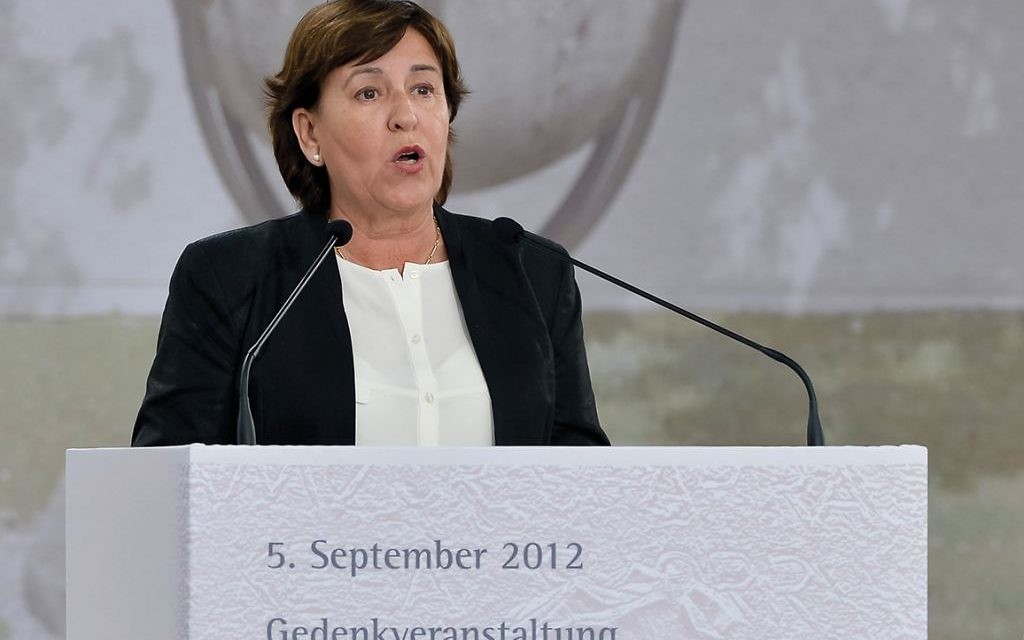 On Sept. 6, 1972, Ankie Spitzer slowly walked around Apartment 3 of 31 Connallystrasse, a duplex dormitory room in the Olympic Village of Munich, where the Summer Olympics were underway.

She wanted to see where her husband, Andre Spitzer, coach of Israel’s Olympic fencing team, had spent some of his last hours.

Andre Spitzer was among 11 Israelis — athletes and delegation officials — who had been killed by Palestinian terrorists, members of the PLO-affiliated Black September Organization, in the Israelis’ third-floor dorm room and in a shootout with German police at Munich’s Fürstenfeldbruck Airport at the end of an 18-hour siege.

Lost in thought and still grieving, the widow saw blood on the floor of the room, bullet holes in the walls. Spitzer attended a memorial ceremony in Munich that day, and then returned to Israel, accompanying the Olympians’ bodies. And she vowed that the world would never forget the massacre.

After more than 40 unfruitful years, urging the International Olympic Committee (IOC) to recognize the Israeli losses publicly at future Summer Olympics, Spitzer, on the eve of this year’s Games, has gained a measure of success.

But only a measure — a bronze, not a gold medal, if you will.

Spitzer has led an international lobbying effort for a minute of silence for the murdered Israelis at Summer Olympics since Munich. Instead, the International Olympic Committee (IOC), which had often ignored and strongly resisted her demands, has made a small concession — a memorial stone in the Olympic Village at Rio de Janeiro, a ceremony in Rio’s City Hall in which IOC officials will participate, and the possibility of a mention of the Israeli victims during a “moment of reflection” during the closing ceremonies.

“It’s not exactly what we wanted,” Spitzer, who lives in Ramat HaSharon, told The Jewish Week in a telephone interview. “After 44 years of fighting the International Olympic Committee … we decided to accept it. We are pleased with the progress we have made. This [the memorial stone] will be something permanent” at future Olympics.

“It’s a good first step,” said David Kirschtel, CEO of the Rockland JCC, who has led efforts in the United States for a minute of silence. Under Kirschtel’s leadership, the JCC has commissioned a sculpture dedicated to the Munich 11, displayed posters of the murdered Olympians in the front lobby, approached political officials for support, produced a documentary on the Munich terrorism, and helped coordinate an online petition drive.

Kirschtel said he is following the lead of Spitzer, and of Ilana Romano, whose weightlifter husband Yossef was another Black September victim, in accepting what the IOC is offering.

Spitzer, now 70, a native of Holland and a correspondent for Dutch TV and radio, has confronted and “pestered” a succession of Olympic officials. Over the years, Spitzer heard excuses from the IOC: the Olympic are apolitical, Arab and Muslim nations might pull out of the competition, there is no time in the Olympic schedule for such a commemoration, it’s “too early” to take such a step. In lieu of an IOC-sponsored ceremony, local Jewish communities in the host cities have held their own event, and memorial ceremonies take place in Israel.

This year, for the first time, the Olympic movement will officially recognize the 11 Israelis who lost their lives at Munich. On Aug. 3, two days before the Opening Ceremonies, the IOC will dedicate a memorial stone, describing the 1972 terrorism, in the center of the Olympic Village in Rio de Janeiro. Atop the large stone will go a smaller one, “symbolizing Jewish mourning,” from Mount Olympus in Greece, according to Spitzer, who, with Romano, will represent the victims’ families at the ceremony.

The stone monument will travel to future Summer Games; its next appearance: Tokyo in 2020.

The Olympic Village ceremony, open to all athletes, will also mention “a few more victims,” including a German policeman killed in the 1972 “so-called rescue operation,” two tourists killed in Atlanta’s Centennial Park during the 1996 Olympics, and Georgian Nodar Kumaritashvili, a luger who was killed in a training run at Whistler, Canada, in 2010, Spitzer said.

A second, invitation-only, ceremony, under Jewish auspices and the City of Rio de Janeiro, will take place on Aug. 14, fittingly Tisha b’Av, a holiday that commemorates Jewish tragedies through the ages.

In addition, a “moment of reflection” during the Aug. 21 closing ceremonies will remember all Olympians who have died during past competitions, including the Israelis.

“We are still hoping that [IOC President] Thomas Bach will mention our loved ones by name, but we did not get a confirmation on this,” Spitzer said.

In Germany, a first-ever IOC-supported memorial to the 1972 victims is under construction on the grounds of Munich’s Olympic Village, an initiative of the Bavarian government; and the IOC has supported a documentary, “Munich 1972 & Beyond,” produced by the Foundation for Global Sports Development,” which premiered this year.

The decision to finally make recognition of the murdered Israelis a part of the Games was made by Bach, who became IOC president in 2013. An Olympic fencer who competed at the Montreal Games in 1976, Bach is, ironically, German; but Spitzer, who has met — and publicly embarrassed — Bach, said he probably acted out of a sense of responsibility for the image of the IOC, not from a sense of guilt as a native of the land where Jewish blood was shed in 1972. Efforts to reach the IOC for comment were unsuccessful.

Alex Gilady, an Israeli member of the IOC for two decades, told The Jewish Week in an email interview that the IOC decision to make some sort of recognition of the 11 Israelis represents “a new era in the relationship between the IOC and the families of the Munich tragedy. … Thomas Bach has taken a personal approach.”

The IOC, Bach told Spitzer, suffered “trauma” because of the growing support for a silent tribute that her campaign earned in several countries — especially in London, host of the 2012 Summer Games — when the Committee balked at her remembrance request four years ago. Parliament held a moment of silence for the Israelis during the London Games, she said. The US Senate unanimously passed a resolution; the N.Y. State Assembly passed its own bill; legislators in Germany and Australia took similar steps. More than 100,000 people signed an online petition Spitzer initiated. The cumulative result: publicity that made the IOC look a like poor sport.

“We don’t want to go through the same trauma” again, Spitzer said Bach told her.

Whatever the IOC reasons, Fred Berger, brother of David Berger, an Israeli weightlifter from Cleveland who died in the 1972 massacre, said he is “very happy that there will be a moment of silence.” However, he said in an email interview, “I can’t help but think about how long it took for this to happen and how much resistance there was to the idea [by the Olympic movement] for almost 40 years.

“My Dad, who passed away last year at age 97, did not live to see his dream of a moment of silence come true,” Berger said.

Spitzer said she expects heavy security at the Rio ceremony — the type of measures, put in place post-Munich, which may have prevented the Black September terrorists from sneaking into Munich’s Olympic Village.

She called the terrorists’ action antithetical to the Olympic spirit she witnessed in the Olympic Village in 1972, Andre freely conversing with members of the Lebanese team.

She said this is the ideal she has tried to pass to her daughter, Anouk, the Spitzers’ only child.

“Our message is not a message of hate,” Spitzer would tell Olympic officials — but she wanted the world to see the type of hatred that took the Israelis’ lives. “We want what happened in Munich to never happen again.”

During one of her meetings with Bach, she told him that the Jewish community’s determination to establish a moment of silence would continue after she is gone. “My children will continue to fight for this,” she told Bach. (She had three more children with her second husband, from whom she is divorced.) “And my grandchildren will. You won’t get rid of us.”

What would Andre think of her work over the last 44 years?

“I think he would be proud,” she said. “We fought for the right to be recognized. I owe it to him.”