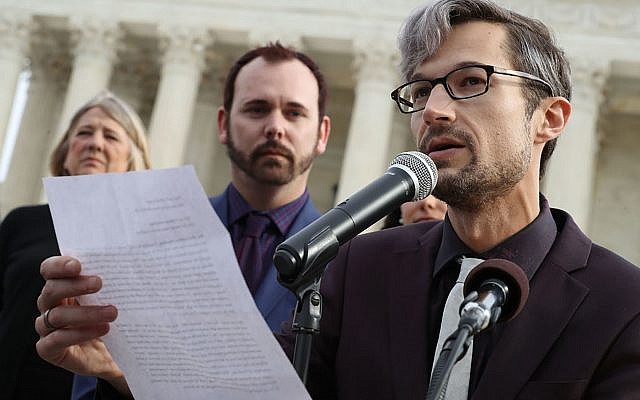 Charlie Craig, at microphone, and David Mullins, sued a Colorado cake shop after its owner refused to design a cake for their same-sex marriage. The Supreme Court ruled narrowly in the baker’s favor. Getty Images

Between neo-Nazis marching in Charlottesville, the synagogue massacre in Pittsburgh and the shul shooting in Poway, Calif., the Jewish community has been on edge for more than a year.

Synagogues and Jewish institutions are holding active shooter drills, scrambling to beef up security and struggling to raise money to pay for it all. Anti-Semitic incidents, as recorded by the Anti-Defamation League and the NYPD, have soared over the last two years.

Now, a new survey by the nonpartisan, Washington-based Public Religion Research Institute finds that nearly 20 percent of Americans consider it permissible for businesses to refuse service to Jews on religious grounds. That figure — 19 percent — represents a seven percent jump from 2014, when 12 percent considered such a refusal permissible.

According to the survey, “Increasing Support For Religiously Based Service Refusals,” Republicans are more likely than Democrats to support service refusal to Jews, 24 percent to 17 percent.

“A small but increasing number of Americans think it should be permissible to turn away customers based on their sexual orientation, gender identity, religion or race,” said PRRI founder Robert Jones. “While legislative agendas and the media have mostly focused on such policies in relationship to the LGBTQ community, this survey indicates that these sentiments about religiously based service refusals extend to other minority groups such as atheists, Muslims, Jews and African Americans.”

The survey, which polled 1,100 people in April, comes amid an emerging legal battle between businesses’ “public accommodation” and business owners’ “freedom of religion” right to place convictions before profit. While it did not specify what “religious” grounds or scripture a business owner could cite, the study indicated that substantial minorities of U.S. citizens view it permissible for the owner of a small business to refuse service — in such places as restaurants or bakeries — to members of other religious groups and minorities.

“It shows we have our work cut out for us,” David Barkley, the Anti-Defamation League’s national religious freedom counsel, said of the study’s findings. He called them “disturbing,” and said support for service refusal is likely more common among senior citizens, whose views “are more hardened … who grew up in a different time,” than among millennials.

While support for religious-based service refusal to Jews increased among most religious groups, large spikes were recorded among white evangelical Protestants and white mainline Protestants — from 12 percent to 24 percent, and 11 percent to 26 percent, respectively.

“We can conclude that this increase is in line with other indicators of rising anti-Semitism,” said David Pollock, associate executive director of the Jewish Community Relations Council.

Yet Pollock issued a caution about the findings. “The survey is really hard to read because we don’t have enough information about a possible underlying issue: Is ‘refusing to serve’ a surrogate or indicator of another type of prejudice?”

Marc Stern, general counsel at the American Jewish Committee, agreed, calling the survey inconclusive. “I’m not bowled over by the results.”

If the survey participants thought they were backing outright refusal to serve members of a minority group, rather than denial of services in a specific instance, “that would be scary,” Stern said.

The survey follows several recent court cases that featured small businesses — a bakery in Oregon, one in Colorado, a florist shop in the state of Washington, a wedding invitation firm in Arizona, a tax service in Indiana — that declined business from same-sex couples.

Stern said the rising support for service refusal is more likely the result of these high-profile court challenges brought in recent years by members of the LGBT community rather than outright “animus”; in other words, people whose consciousness of a business owner’s asserted right to deny services to one group for religious reasons have extended their opposition to other groups. “More people are taking a side,” Stern said. “It’s just a reaction to the legal environment.”

Stern said the premise of the survey’s primary question implied a connection between business’ service refusal and the court cases. “I found the question misleading. What precisely they are being asked is not clear,” he said. “I don’t know what the poll means.”

Jews are not alone among minorities when it comes to Americans’ belief that they can be denied service; they ranked behind LGBTQ people (30 percent gay and lesbian; 29 percent transgender), atheists (24 percent) and Muslims (22 percent), and ahead of African-Americans (15 percent)

The kind of service refusal referenced in the new study has a fraught history in the United States. For decades in the early and mid-20th century, Jews could not gain admission to exclusive Christian-dominated country clubs in this country. At the same time, blacks were largely excluded from restaurants and hotels in the South, and Catholics, especially those from Irish backgrounds, were routinely faced with employers and want ads that made it clear that they were not welcome. Religion, and selective interpretations of Bible verses, were often cited as justification for discriminatory behavior.

Such overt forms of acts against various minority groups generally fell out of favor — and out of legal sanction — by the 1950s and 1960s, in the wake of the New Deal, World War II and civil rights era legislation.

The Trump administration has, over the last two years, tried to carve out a larger role for religion in the public square. It has, for instance, afforded health care workers protections to be able to deny procedures that run counter to their religious convictions.

Jonathan Tobin, editor-in-chief of the Jewish News Syndicate, a contributing writer for National Review and an op-ed columnist for The Jewish Week, cautioned that the survey did not directly address recent court cases; the central point of those cases, he argued, was the right of a business owner with religious beliefs, “who does something artistic,” to decline “to take part in a religious ceremony” — for example, a same-sex wedding — that violates his or her beliefs.

“Those cases are not about refusing service” simply because someone is a member of a specific group, he said. A business owner’s freedom of religion, and “public accommodation” of members of any group to be served by a business in a non-discriminatory fashion, “are two very separate things.”

Owners of businesses involved in the recent court cases have argued that they should not be forced by the government to choose between their religious beliefs and their livelihood.

“This is an attitudinal survey,” and does not necessarily indicate support for actions — including acts of violence — against minority groups, Pollock and other experts said. They said they have heard no reports of Jews being refused service at small businesses because of their religious-ethnic identity.

(One exception: During the height of public concern over the spread of measles, while a chasidic Jewish man was waiting at an MTA bus stop to board a city bus in Brooklyn in April, a bus driver refused to stop the bus for him, according to a complaint filed by the man. He said he ran after the bus, and finally boarded, but only after the driver told him, “Go in, measles.”

The driver apparently associated the chasidic man with the borough’s measles outbreak, which was largely confined to the charedi community.)

The survey, said author and law professor Thane Rosenbaum, “reveals a latent prejudice” in parts of U.S. society. “Latent prejudice has become more revealed. There are people who believe that” [members of various minority groups] “should be treated differently because of who they are.”

One figure in the study — the doubling in the willingness of Evangelicals to deny service to Jews — seems counterintuitive, given their embrace of Israel. Rosenbaum offered an explanation. Support for Israel, he said, “has never been a love affair with Jews – it’s a love affair with the Rapture,” a reference to a tenet of fundamentalists’ New Testament-based end-of-days scenario. “The interest that Evangelicals have in Israel is much greater than the interest they have in Jewish-Americans.”

How much of the study’s findings can be pinned on an increase in incivility in this country since the 2016 presidential campaign?

The atmosphere in the nation “certainly does not help,” Rosenbaum said, adding, “there is no one cause for any of this. We’re a much more polarized nation. There is much more permissiveness to create us-versus-them categories.”