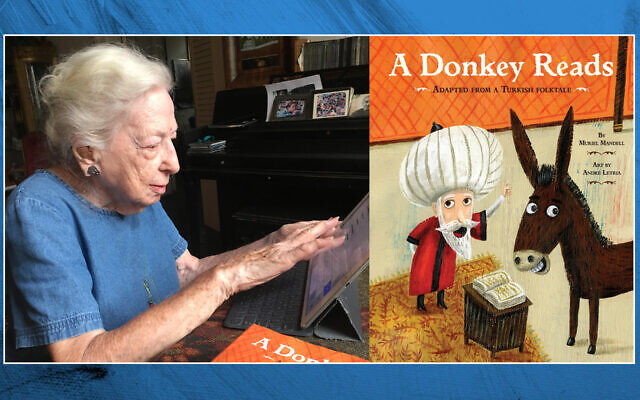 Muriel Mandell works at her iPad at her apartment in Greenwich Village. After a career as a reporter and school teacher, she began writing children's books, including "A Donkey Reads," right. (Lori Silberman Brauner)

Muriel Mandell, whose 100th birthday is Aug. 19, shows few signs of slowing down.

The former wartime reporter-turned children’s book author-turned tech-savvy senior continues to lead a very active life in her late 90s, as a reporter learned while recently visiting her at her Greenwich Village apartment.

She is still reviewing children’s books and taking classes. And as a founder of SeniorTechNYC at the Marlene Meyerson JCC Manhattan and its predecessor, the SeniorNet Learning Center, she teaches classes in animation, photo editing and Microsoft Word. During the pandemic, she has continued teaching the classes on Zoom.

In May, she received a “16 over 61” award from the JCC, given to those who display “the creativity, leadership, and initiative of older adults who exemplify our collective values.”

“Muriel masterfully coordinated this important program for many years and continues to develop varied and interesting classes and related curriculum,” Susan Lechter, director of the JCC’s Wechsler Center for Modern Aging, wrote in an email to The Jewish Week. “She has taught hundreds of older adult students over the last two decades and has been a phenomenal asset to the JCC older adult programming. It is a privilege to have her in our midst.”

Mandell also achieved a bit of fame in January when she received her first COVID shot at Manhattan’s Jacob Javits Center on the first day it opened as a mass vaccination site. She was approached by WNYC and the Associated Press, and her picture appeared in newspapers and web sites around the country, including the New York theater blog run by her son Jonathan.

Yet the pandemic was anything but easy for Mandell. She was unable to get too close to family members, including her granddaughter, before vaccinations became available.

Born in Manhattan, Mandell lived in Queens and Brooklyn before later moving to Paterson, N.J., with her family. She attended East Side High School, and as a senior, was selected by teachers as its representative for the Paterson Morning Call newspaper. “I was paid three cents a word, and I made as much as $3 a week,” she recalled.

When she applied for college, she sat down for Brooklyn College’s entrance exam — only to be told that she had already been accepted, before spilling the bottle of ink she was supposed to use for the test.

“Of course I worked on the newspaper there,” said the former associate editor of the Brooklyn College Vanguard. After college, she enrolled at Columbia University’s Graduate School of Journalism before moving to Washington, D.C. There she worked for the Jewish Telegraphic Agency, and its offshoot, the Overseas News Agency, which was formed during World War II. Her byline then was Muriel Levin.

“I covered everything, the State Department, the White House, the Pentagon, the Senate, the House of Representatives, the works,” she said. In a March 1944 dispatch, she reports on a visit to the White House by Rabbis Stephen S. Wise and Abba Hillel Silver. The two leading Zionists got President Franklin D. Roosevelt’s assurance that he didn’t approve of the White Paper, the British policy limiting immigration to Palestine. 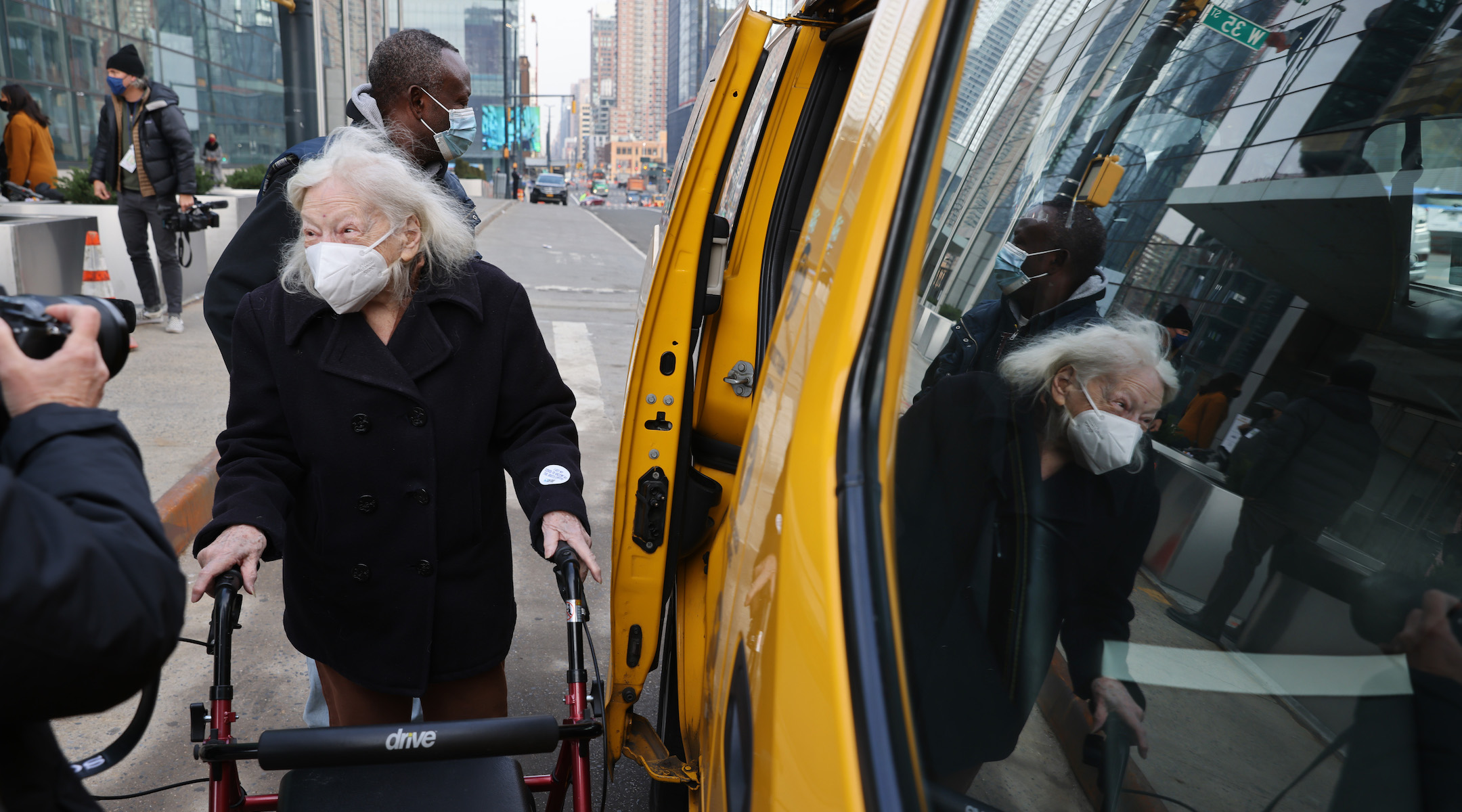 Muriel Mandel leaves Manhattan’s Javits Center after becoming one of the first people to receive the COVID-19 shot at the mass vaccination site on Jan. 13, 2021. (Photo by Spencer Platt/Getty Images)

When asked about the dire situation for European Jews during World War II, as well as Roosevelt’s response to the Holocaust, she said. “We knew and we didn’t know — it was a combination.” Although JTA provided the first and sometimes only reports on the unfolding genocide, “it took years before you really realized what was really happening.” During those wartime years, FDR was also idealized as a president.

She does not consider her role as a woman journalist particularly groundbreaking. “There were a bunch of us” involved in reporting in the 1940s. But after a couple of years, she got married and quit that post, “maybe stupidly,” she said with a chuckle. She followed her husband back to the New York area, becoming a police reporter at the Long Branch Record on the Jersey shore before later working as a publicist.

A former English major, Mandell had also taken education courses. After her two sons went off to college, “I went into teaching because my writing was not making a lot of money. And so I taught for a lot of years actually.”

She also worked as a coordinator for writers’ manuals for the New York Board of Education. She later retired from teaching, returning her focus to writing children’s books. Among her more than 12 titles are the fictional “A Donkey Reads” and “Jonathan’s Sparrow” and non-fiction books designed to spark children’s curiosity, including “Fantastic Book of Logic Puzzles,” “365 Simple Science Experiments with Everyday Materials” and “Make Your Own Musical Instruments.”

She is also active as a member of the Bank Street College of Education Children’s Book Committee, staying up on current children’s literature and contributing reviews to the committee’s annual collection of best children’s books. “I read children’s books,” she said, “’til they come out of my ears.”

She became computer savvy in 1994, after her husband passed away, and through the international organization SeniorNet acquired computer literacy skills to the point where she was able to educate others through the JCC. “I’ve been teaching computers ever since,” she said.

As if that were not enough, her children’s writing found a new platform: digital apps. “When I was 90 years old, for the first time I learned what an app was, and I wrote about 50 stories — adaptions mostly, but some originals” for a children’s app known as FarFaria (a play on “far, far away”).

As an active member of the Bank Street children’s book committee, she has a strong opinion about the market for Jewish children’s books: With the preponderance of titles that focus on the Holocaust or Anne Frank, “there aren’t enough about the rituals that are positive and how the Jewish family exists,” she said. “Not enough of that.”

You don’t want to just take up space. You want to have something to contribute.

As for her own Jewish identity, she describes herself as strongly “cultural.”

“I’m proud of being a Jew,” she said, “I wish I knew more… but my background is limited, and I know it.”

Asked about the secrets of longevity, she focused on the quality of life, not the quantity of years. Recognizing the challenges of old age, she said, “You don’t want to just take up space. You want to have something to contribute, otherwise why, why do you still exist? So it’s tough.”

She continues to enrich herself, taking United Federation of Teachers-sponsored classes for retirees, including playwriting, Spanish and watercolors.