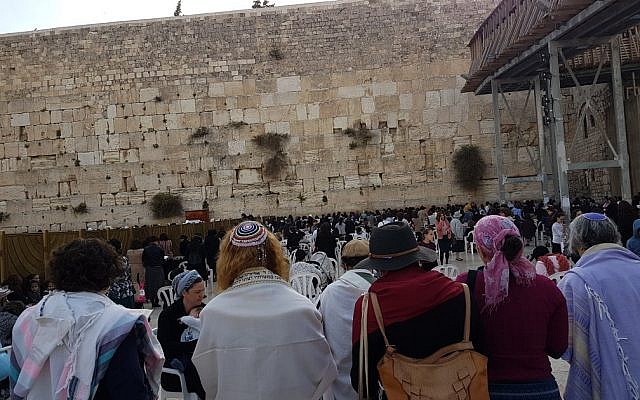 Courtesy of the Original Women of the Wall Facebook Page

Friday, March 8, 2019 is International Women’s Day, a day to celebrate women’s achievements, raise awareness against bias and take action for equality. The impact of many of JOFA’s initiatives reach across geographic lines. These include increasing women’s participation in Jewish text study, synagogue-based rituals, and advocating for communal leadership roles. This year, JOFA is marking International Women’s Day with a blog series on women’s tefillah (prayer) efforts at the kotel. These organized efforts were initiated over 30 years ago by American Jewish women (many of whom later became founders of JOFA) who were visiting Israel in order to benefit Jewish women from around the world. We hope you will take a few moments to read reflections from Original Women of the Wall/Tfillat Nashim BaKotel as well as Women of the Wall/Nashot HaKotel.

Looking over the thirty-year record of this legal saga, I wonder how did we get here? There have been so many obstacles, complications, challenges and unforeseen battles. We never could have expected or anticipated any of them. In all honesty, had we seen any of them coming we never would have undertaken that very first tefillah at the Kotel. I know. I was there.

From the very first moment in 1988, when Rivka Haut whispered in my ear, “Let’s go to the Kotel on Thursday,” I never imagined nor did any of us prepare for conflict. We were stunned when photographers captured our images at the Kotel; panicked when rabbis called us names and shocked that Jews thought us rebels. All we wanted to do was pray at the Kotel. How innocuous was that!

Again in 1989 when we agreed to go to court to challenge the State’s injunction against our right to daven with tallit and Torah, we did not expect years of legal struggle amidst feminist disinterest. The Israeli feminist world, including the Israel Women’s Network led by my dear and wonderful friend Alice Shalvi, would have nothing to do with us or our litigation. They had much more serious issues to deal with including gender inequality and domestic violence. Who cared about the Kotel? And in truth we thought it a minor item that would be settled quickly in the courts. Again, we never thought that we would end up in the Supreme Court of Israel. So many obstacles, so much money, time and effort and lost friends!

But as they fought to survive in a hostile world themselves, our cause was not a priority.

Later, in the 1990’s, as new feminist Orthodox organizations were established, some of us in our beleaguered small organization of Women of the Wall hoped/expected to finally get some robust support. Both JOFA and Kolech did not come into existence until near the end of the twentieth century. But as they fought to survive in a hostile world themselves, our cause was not a priority. Nonetheless, at the first JOFA conference in 1997, there was a workshop session on Women of the Wall. But on the legal front, neither JOFA nor Kolech supported WOW in its litigation efforts. Although both organizations were strong enthusiasts of women’s tefilah groups, from which we began, perhaps they feared our legal conflict would bring harmful publicity to Israel. We ourselves were concerned with that very issue and had initially pledged to avoid the general press, voluntarily limiting our reportage to the Jewish world.

It was in 1997 that the famous issue of Robinson’s Arch entered our legal scene. 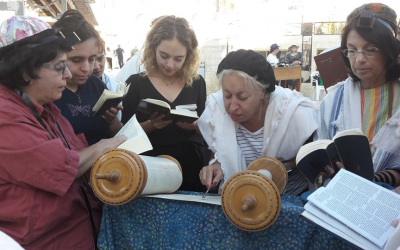 Courtesy of Original Women of the Wall Facebook Page

At that point the Ne’eman commission began an inclusive investigation of the possibilities surrounding moving alternative prayers to this archeological site. We remained committed to our legal rights to pray at the Kotel.

As the legal process stretched on expensively and mind-numbingly, the WOW story happened at the Kotel not in the courts or in the press. There, women were energized by Bonna Dvora Haberman’s spirited engagement with prayer. Eventually Anat Hoffman began to organize and manage WOW. Strangely, we won a series of legal battles in 2003, 2013 and even recently in 2019. But none of these actions removed the Haredi hold on prayer proceedings at the Kotel. They held onto that as though the Kotel was their own private synagogue — which it is not! Thus, although our legal victories enabled women to pray with a Torah, the administrating rabbi refused to allow women to either receive one of the Kotel Torahs or to bring in their own Torah. Additionally, the security guards were instructed to search WOW women more invasively. This search procedure was recently (February 2019) reaffirmed as illegal in the Israeli court.

We, the Original Women of the Wall (OWOW) want only one thing; to pray at the Kotel.

All along, one of the most conspicuous obstacles has been the lack of support and hostility between the women themselves. Anat Hoffman, working within the Reform and Conservative movements has repeatedly tried to subvert the original purpose of our long presence and legal proceedings.

We, the Original Women of the Wall (OWOW) want only one thing; to pray at the Kotel. For us it has always been about praying as a group of women, with song – like Miriam, with Torah – like Hannah, and for those who choose to, with tallit and tefillin. All these ritual activities are well within our basic rights according to Jewish and Israeli law. We did not do battle to go to Robinson’s Arch. Our goals (which may be naïve) have been consistent: to pray at the Kotel. As Women. As Jews.

Only that. Only there.

I know. I was there.

Norma Baumel Joseph is a Professor of Religions and Cultures at Concordia University and the Associate Director of the Azrieli Institute of Israel Studies.