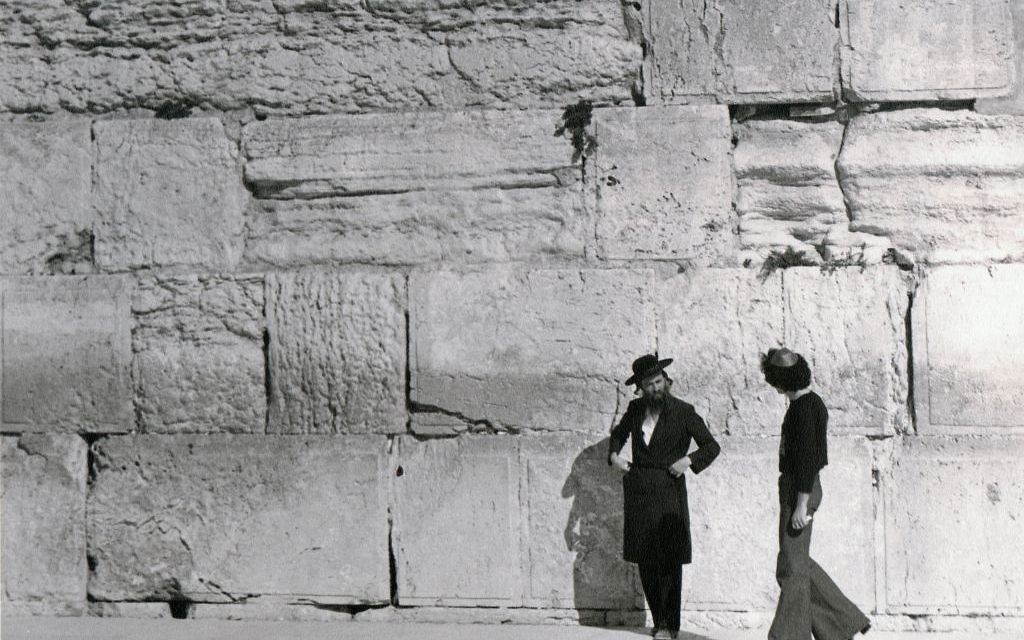 In the Golan Heights in 1974, an Arab girl stares at the camera from behind a “stop” sign; an Israeli soldier buys a fruit juice from a stand right behind her.

It’s not what you’d expect to see on the occasion of Israel’s 65th Anniversary. Then again, Burt Allen Solomon’s black and white photographs, featured in “Some Things Seen in Israel” at the Derfner Judaica Museum, are not typical in any way.

Solomon says he intended to observe, not to editorialize. But, taken during five trips over the course of 40 years, the photographs inevitably chronicle certain changes in Israel. The earliest photos from 1968 depict a young Israel, with one foot still in the 19th century, where Arab shepherds grazed their sheep and young Israelis wore “kibbutz” hats.

The 1974 photos capture a teeming, adolescent Israel up-close: people pushing to board a bus, the curve of a teenager’s hip as she flirts. In contrast, the Arab population is photographed at a distance, perhaps reflecting a post-Yom Kippur War sensibility. An Arab bus station is seen from afar.

His 21st century photos virtually ignore Israel’s history, as well as its Arab population. They show a country engaged in construction — cranes are everywhere. Yet, in one early morning shot Solomon glimpses a deeper need. Against a background of Tel Aviv’s skyscrapers, a lone man sits on the beach in a yoga pose. Is this a respite from urbanism? The search for spirituality in a place that has drifted from its idealistic roots? Solomon would say it’s up to the viewer.

Born in 1944 in Brooklyn, Solomon learned to print in black and white from his father. Taking photos for most of his life, Solomon only recently began to show his work. His well composed, deftly printed and thoughtfully displayed photos — along with the other art on view at the Derfner and on the The Hebrew Home at Riverdale’s picturesque grounds — are worth an outing.

Caroline Harris is an amateur photographer and a partner at the law firm GoldmanHarris, LLC.