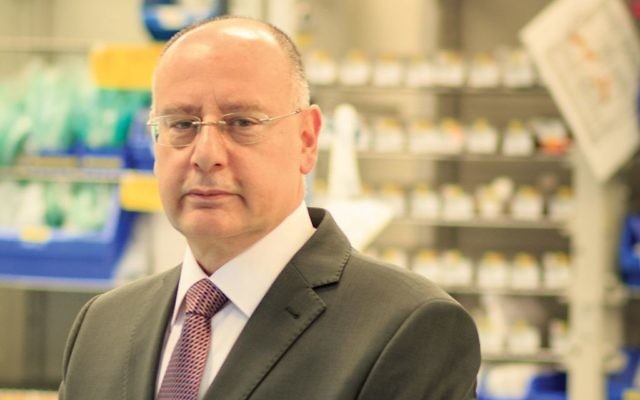 Western Galilee Hospital’s Dr. Masad Barhoum: In caring for Syrians, “you see them as a person, not as an enemy.” Amir Yarchi

Dr. Masad Barhoum has been director-general of the Galilee Medical Center in the Israeli city of Nahariya since 2007, the first Israeli Arab to hold such a position. For the past four years, the hospital has cared for more than 1,600 Syrians wounded in the country’s six-year-old civil war. Although neighboring Jordan and Turkey have also cared for injured Syrians, Israel appears to be the only “enemy” state to do so. Barhoum was honored last week by the American Jewish Committee with its International Human Dignity Award.

Q.: Your 722-bed hospital is only six miles from the Lebanese border. When the Syrian civil war began, did you expect to be treating the wounded?

A.: We didn’t expect to take care of any injured Syrians, but it was a government decision. I am proud of [Israeli Prime Minister] Bibi Netanyahu’s decision; it was a humanitarian mission that we take care of injured civilians. For four years we have taken care of 70 percent of the Syrians who have come to Israel for treatment.

Who was the first patient?

There were two Syrian men who had head injuries. They came in an IDF ambulance. One died in the shakoom, the severe trauma room. The other was taken immediately to the operating theater and survived. After one week, he woke up and asked, ‘Where am I?’ He was told, ‘In Israel.’ He was shocked and afraid, but after one or two days he understood that we were just taking care of him and nothing else.

We have Jews, Arabs, Druze and Muslims in every shift, so there is always someone there who speaks Arabic. Today, if you ask any patients, they would say they want to come to Israel [for treatment] because they know they will get the best Western medicine of any hospital.

Were you surprised with the government’s decision to treat Syrian casualties?

No. There is a history of the Jewish people’s suffering in the Shoah, and I wasn’t surprised that my government took the decision to take care of them — although those we care for are only a drop in the ocean. I am proud of the decision and to have the opportunity to take care of these poor people. Everyone on my staff who comes in touch with any one of them and hears their stories cries like me. You see them as a person — not as an enemy — and you feel their tragedy. So we cry and are glad to help them and treat them and send them back. They say they don’t want to stay because they have families, land and homes in Syria and they want to go back.

Are the Syrian patients segregated from your other patients?

We don’t put them together with other patients except for those who need intensive care. But those who don’t need it are separated because of their state — we don’t know who loves us and who doesn’t like us. There are a lot of Arabs and Jews who see things totally different than our government.

What is the nature of their injuries?

The head, extremities, the abdomen … . A few days before I left we took care of a 9-year-old child who was shot in the spine by a sniper and paralyzed from the neck down. It’s a tragic story that we see every day.

The average stay is 23 days and maximum is 1 ½ years. A Syrian’s face was gone because of a bomb, and so we had to build him a new face with a 3-D printer [that was used to print titanium implants]. He told us what kind of nose and mouth he wanted. The result is much better than what he came in with. He is happy and very grateful for the staff and the State of Israel. He has said that many times. All of the Syrians who were treated are very grateful. It is very important to show the beautiful face of the State of Israel and to spread the news that we are doing a humanitarian job for the Syrians.

What has been the cost of such care?

It’s a very high cost — almost $65 million over the four years. We have not been fully paid yet and the hospital will be in a very difficult situation if we don’t get paid this year.

I understand you treat Syrian civilians and combatants.