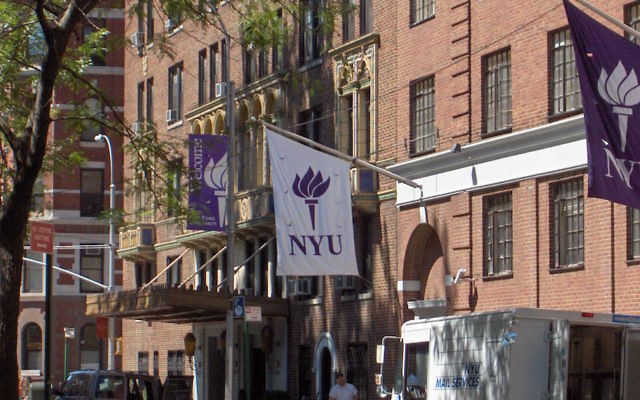 Update 3:30pm EST: The Bronfman Center reopened after consulting with  NYU Public Safety, NYPD, and other security experts in the Jewish community, according to announcement posted on Facebook from Rabbi Yehuda Sarna. “All activities at the Bronfman Center will resume as planned,” the statement read.

Early Wednesday morning, the Bronfman Center for Jewish Student Life at New York University announced that it would temporarily close after staff discovered “several public online postings by an NYU student which were antisemitic in nature and potentially threatening,” according to an email from Rabbi Yehuda Sarna, executive director of the center. Several students reported that security was added at the kosher dining hall on campus.

“Due to heightened tensions at NYU, we are taking all threats seriously and have notified NYU Public Safety and NYPD,” Rabbi Sarna wrote.

Several campus-affiliated groups have pointed to the same student as the source of the social media posts, though NYU officials have not released the name of the student. An anonymously run Facebook page called “SJP Uncovered” posted screenshots of the following post from the student’s Twitter account on Dec. 3: “thanks to whoever got my account suspended just cuz i expressed my desire for zionists to die .and f**k [asterisks added] twitter for not doing a better job of deleting entire accounts that do nothing but tweet violently racist things.”

NYU’s Jewish Voice for Peace responded in a tweet: “We are not affiliated with NYU student [name withheld]. This individual’s threats against the Jewish community puts us all in danger and must be taken seriously. We are in solidarity with our fellow Jewish students in our collective fight against antisemitism.” NYU’s Students for Justice in Palestine chapter responded similarly.

The closure of the Jewish student center comes less than a week after a BDS resolution was passed by the university’s undergraduate student government. The resolution inflamed tensions between pro-Israel groups and student clubs advocating for the resolution.

The Bronfman Center and an NYU spokesperson did not immediately respond to a request for comment.