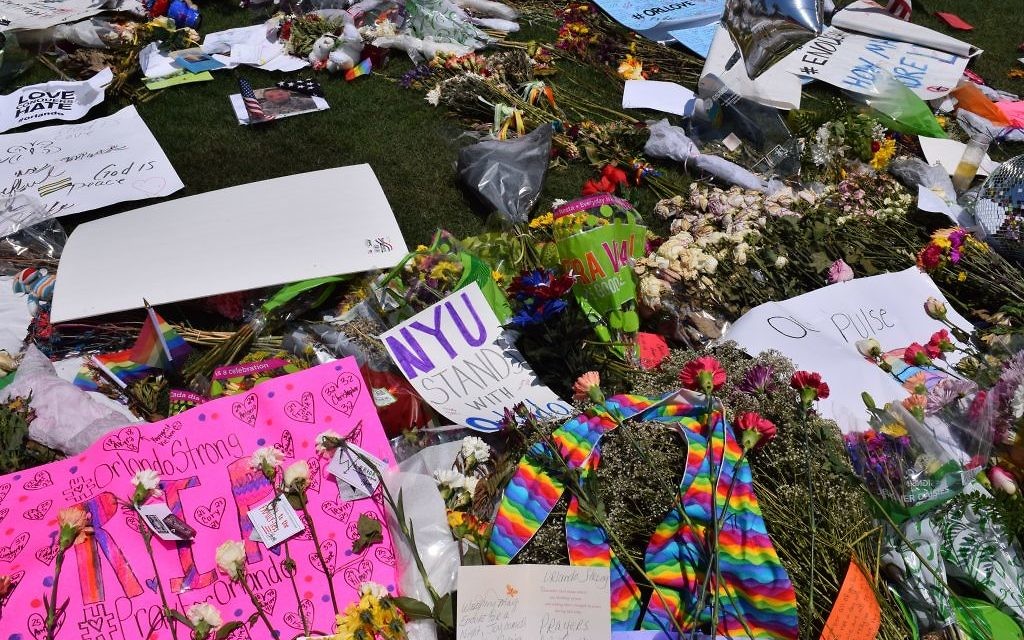 Five days after NYU’s Jewish community gathered over 150 students outside of Max Brenner in Union Square to commemorate the four Israelis killed in a Tel Aviv terrorist attack last week, they were mourning once again. This time, NYU’s Jewish students were standing with the rest of the NYU community to honor the victims of the Orlando shooting.

Looking out onto Washington Square Park, with the sun still shining, over a hundred NYU students sat huddled together on the steps of the Kimmel Center for Student Life, a hub for NYU’s campus activities, to remember the lives that were lost in the Orlando shooting. The students were visibly emotional as they listened to a university chaplain, the university president and a series of student speakers address the crowd.

Imam Kahlid Latif, the chaplain for the Islamic Center at NYU, pleaded to God to “guide the footsteps of our brothers and sisters afflicted by this tragedy” in a moving prayer and reflection offered in English. The student speakers, who were not introduced by name, represented both the Latino American and LGBTQ communities, the two groups most affected by the tragedy. One student speaker, who is both Latino and LGBTQ, knew two of the victims personally. He first met one of those victims, Eric Ortiz, at Pulse nightclub six years ago.

“Pulse nightclub becomes, for many of us Latin LGBTQ members, a safe environment,” he said. “Pulse is where I first came out to my closest friends. It’s where most of us came out.”

Another LGBTQ student speaker, from Puerto Rico, read the list of the victim’s names. “This could have been me,” she said.

One NYU student, Patience Carter, was at the Pulse nightclub at the time of the attack. Carter, who is from Philadelphia, and her friend Akyra Murray made it out of the club after the shooting began, but decided to go back to find a friend of theirs. Carter made it out, wounded but alive. Murray did not survive.

As of Thursday, Carter, who is now in a wheelchair, was still in the hospital. She, and other survivors, were preparing to meet the President that day.

The event was hosted by the LGBTQ Center at NYU and the office of Global Spiritual Life, which offers environments for multifaith and spiritual encounters to students. Yael Shy, the director of the office of Global Spiritual Life and a 2010 Jewish Week “36 under 36” recipient, said that while many students at NYU are away for the summer, she still feels their pain over the events in Orlando. “On social media we have seen a lot of our students in anguish and anger,” she said.

The Jewish community at NYU has been steadfast in their support for NYU’s LGBTQ community, said university chaplain Rabbi Yehuda Sarna.

“In America today, LGBTQ is an identity. We would gather if Jews were attacked, if Muslims were attacked, and we will gather if [the] LGBTQ [community] is attacked,” Rabbi Sarna told the Jewish Week. He agreed with Shy that the attack is taking a toll on NYU students. “Given the young age of so many of the victims, there is no question that this is hitting our students hard,” he said.

The day after the vigil, the Bronfman Center for Jewish Student Life at NYU, which is led by Rabbi Sarna, sent a five-person delegation to Orlando to go to the site of the shooting and pay respects. The delegation was led by Rabbi Nikki DeBlosi, manager of religious life at the Bronfman Center and leading LGBTQ advocate, who spoke movingly Wednesday night at a Valencia College vigil to commemorate the seven Valencia students killed in the attack.

NYU has a long history of Jewish groups maintaining interfaith relationships on campus. In 2012, Chelsea Clinton, along with Latif and Sarna, started the Of Many Institute, dedicated to fostering a positive space on NYU’s campus for multifaith dialogue. Shy credits the friendship between Imam Latif and Rabbi Sarna for making it happen.

“Those two leaders have gone a long way in building that relationship,” said Shy. In 2014, the “Of Many” documentary, produced by Clinton, followed the friendship between the Rabbi and the Imam.