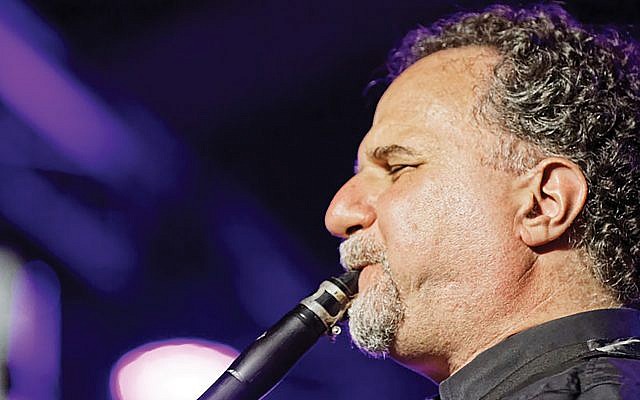 SEAPORT DISTRICT CHANUKAH PARTY
“David Krakauer is such an overwhelmingly expressive clarinetist, who moves so seamlessly between different genres, that for a minute you’d almost think that there’s no appreciable difference between jazz, klezmer and classical music,” The Wall Street Journal writes. Counted among one of the world’s great clarinetists, Krakauer is considered a key innovator in modern klezmer as well as a major voice in classical music. Hear him headline Seaport District’s one-night Chanukah throw-down, which also features holiday foods, arts-and-crafts and blessings. — Tuesday, Dec. 4, 6 p.m., Seaport District, 207 Front St., eventbrite.com. 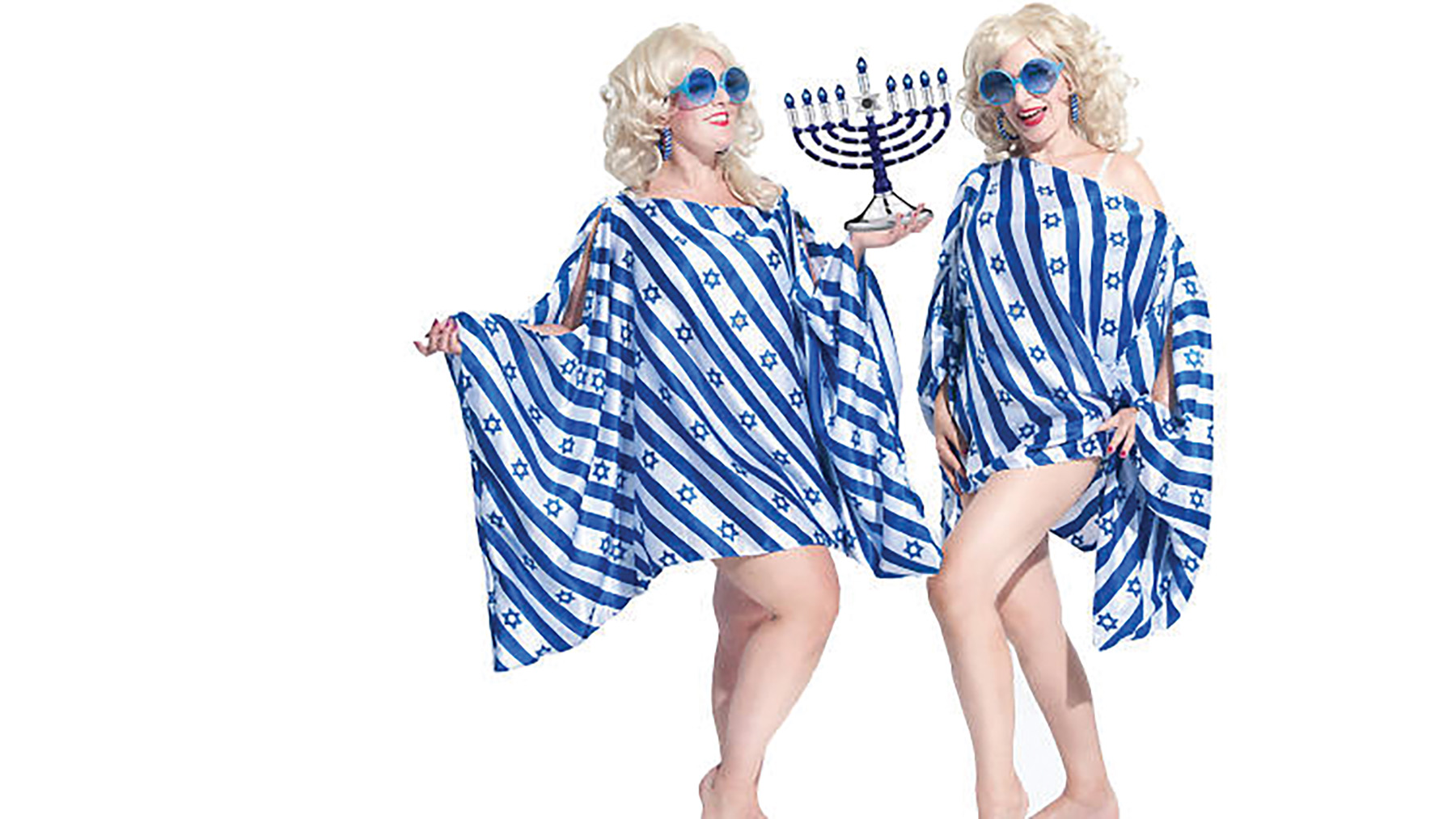 For 12 years, Jewish burlesque mavericks Darlinda Just Darlinda and Minnie Tonka (yes, she hails from the land of Dairy Queens in Minnetonka, Minn.) have teamed up in time for the Festival of Lights as the wicked duo The Schlep Sisters. The two return to celebrate the holiday with their own unique, campy, irreverent and minimally dressed brand of Jewish joy. They will be joined by fellow variety stars Sapphire Jones, Zoe Ziegfeld, The Great Dubini, Allegra and host Bastard Keith. — Sunday, Dec. 9, 8 p.m., Highline Ballroom, 431 W. 16th St., highlineballroom.com.

MONISH
Inspired by a classic I.L. Peretz poem, “Monish: A Musical Tale of Talmud and Temptation” is a musical about an irascible Satan, his irresistible wife Lilith and a young Jew who just wants to be left alone with his books. The show is written and narrated by violinist Sasha Margolis (author of the novel “The Tsimbalist”), with a score composed by Sanford Margolis, performed by the Jewish music ensemble “Big Galut(e)”. — Monday, Dec. 3, 6:30 p.m., Center for Jewish History, 15 W. 16th St., (800) 838-3006, cjh.org.

SIMON’S JOURNEY
A kind and ambitious boy, Simon makes his way from Russia to America. Even when his ship sinks, marooning him on an iceberg, Simon doesn’t give up on the Chanukah spirit: he befriends a lonely polar bear and together they share the Festival of Lights. The performance will be followed by a Chanukah-themed arts-and-crafts session and a brunch. — Sunday, Dec. 2, 11 a.m.– 1 p.m., Museum of Jewish Heritage, 36 Battery Place, (646) 437-4202, mjhnyc.org.

The great 19th-century Jewish female tragedian returns to the stage in Theresa Rebeck’s new play, in which the scenery-chewing actress takes on the role of the Danish prince. Janet McTeer, who won a Tony playing Nora in “A Doll House,” stars. — American Airlines Theatre, 227 W. 42nd St., (212) 719-1300, roundabouttheatre.org. $49-$109.

THE OTHER JOSH COHEN
The night before Valentine’s Day, Josh Cohen — a broke and broken-hearted lovable loser — comes home to find his New York apartment has been broken into and wiped clean, except for one Neil Diamond CD. But as it turns out, for Josh losing everything is just the beginning. — Westside Theatre, 407 W. 43rd St., telecharge.com.

SWEET IS THY VOICE
“Shir Hashirim” (“The Song of Songs”) has inspired generations of Hebrew love poems and musical settings in many languages, from Jewish and non-Jewish perspectives. This concert features a variety of music engaging with the ancient poem, including new works commissioned for the occasion. — Thursday, Dec. 6, 7 p.m., Center for Jewish History, 15 W. 16th St., (212) 294-8301, cjh.org.

A lonely Jew in Utah has been terrified of his Mormon neighbors since childhood, to the point where he refuses to leave his grandmother’s house. But when the house goes up for sale, he’s forced to confront his biggest fears. “Jewtah” is a work of magical realism about being an outsider. Screening followed by Q&A with director and lead actor Jeremy Rishe. — Tuesday, Dec. 4, 7 p.m., Marlene Meyerson JCC Manhattan, 334 Amsterdam Ave., (646) 505-4444, jccmanhattan.org.

THE WORLD BEFORE YOUR FEET

In the spirit of Alfred Kazin’s “A Walker in the City,” Matt Green, a 30-ish Jewish New Yorker from Ashland, Va., set out to walk every street in the five boroughs. Along the way (it took him six years), he’s become an expert on the “churchogogues” (abandoned synagogues that have become churches) and odd corners and history of our city. Documentarian Jeremy Workman followed along for the last three years, and the result (Jesse Eisenberg is executive producer) is a stirring ode to the sidewalks of New York. — Through Thursday, Dec 6, Quad Cinema, 34 W. 13th St., (212) 255-2243, quadcinema.com

FILMS@IIJS: KISHON
Israeli satirist Ephraim Kishon has sold millions of books, was a founding member of Israel’s comedy establishment and won two Golden Globes (for “Sallah Shabati” and “The Policeman”), yet he struggled with writing an autobiography. At the age of 70, he invited journalist Yaron London to assist him. Kishon uses animation and other storytelling tricks to bring their dialogue to life and tell his life story, from his youth in Hungary to his harrowing escape from a Nazi concentration camp to the many highs and lows of his writing career. — Wednesday, Dec. 5, 7-9 p.m., Institute for Israel and Jewish Studies at Columbia University, 617 Kent Hall, eventbrite.com.

BACK TO THE FATHERLAND
“Back to the Fatherland” is the story of young Israelis leaving their homeland to try their luck in the same countries where their families were persecuted less than a century ago. — Tuesday, Dec. 11, 7-9 p.m., Marlene Meyerson JCC Manhattan, 334 Amsterdam Ave., (646) 505-4444, jccmanhattan.org.

Weaving together her recently discovered audiotapes, interviews with friends, rare home movies and diaries read by modern-day comedians inspired by comedienne Gilda Radner, “Love, Gilda” opens up a unique window into the honest and whimsical world of a beloved performer whose greatest role was sharing her story. The screening will be followed by a panel with filmmaker Lisa D’Apolito, executive producer Alan Zweibel and supervising editor Toby Schimin, all Gilda’s friends. — Sunday, Dec. 2, 7 p.m., 92nd Street Y, 1395 Lexington Ave., 92y.org.

JEWISH LIVES, JEWISH LEGACIES
Eight prominent authors, who’ve written biographies of some of the world’s pre-eminent Jews — including Rabbi Akiva, David Ben-Gurion, Barbra Streisand and more — talk about their subjects’ struggles and achievements, and what they can teach us about who Jews are as a people. — Tuesday, Dec. 4, 6:30 p.m., Temple Emanu-El Streicker Center, 1 E. 65th St., (212) 507-9580, emanuelstreickernyc.org.

OTTO FRANK AND ANNA’S DIARY
Raphael Gross of the German Historical Museum will discuss Otto Frank’s role in helping to establish his daughter’s diary as the “emotional anchor” of West Germany’s first empathic confrontation with what would later be known as the Holocaust. — Saturday, Nov. 29, 6:30 p.m., Center for Jewish History, 15 W. 16th St., (800) 838-3006, cjh.org.

MENORAHS AROUND THE GLOBE 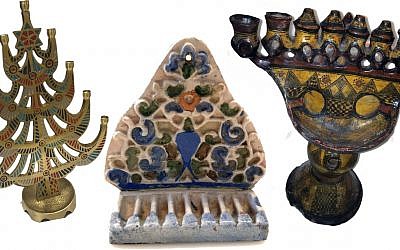 KINDERTRANSPORT
Just weeks after Kristallnacht (Nov. 9-10, 1938), the first group of Jewish refugee children arrived in the United Kingdom. The Leo Baeck Institute and the Yeshiva University Museum launch an exhibition exploring this remarkable effort, one that saved some 10,000 children, many of whom never saw their parents again. —  Center for Jewish History, 15 W. 16th St., (800) 838-3006, cjh.org.

MARTHA ROSLER: IRRESPECTIVE
Brooklyn yeshiva-educated Martha Rosler is considered one of the strongest and most resolute artistic voices of her generation. (She has said that her Jewish education inspired her politics.) She skillfully employs diverse materials to address pressing matters of her time, including war, gender roles, gentrification, inequality and labor. From her feminist photomontages of the 1960s and ’70s to her large-scale installations, Rosler’s work reflects her enduring and passionate vision. — Through March 3, 2019, The Jewish Museum, 1109 Fifth Ave. (at 92nd Street), (212) 423-3200, thejm.org.

CHAGALL, LISSITZKY, MALEVICH
This Jewish Museum show explores a little-known chapter in the history of modernity and the Russian avant-garde, focusing on the People’s Art School (1918-1922), founded by Marc Chagall in his native city of Vitebsk (present-day Belarus). Featuring the works of three iconic figures — Marc Chagall, El Lissitzky and Kazimir Malevich — as well as works by lesser-known students and teachers of the Vitebsk school. — Through Jan. 6, 2019, The Jewish Museum, 1109 Fifth Ave. (at 92nd Street), (212) 423-3200, thejm.org.