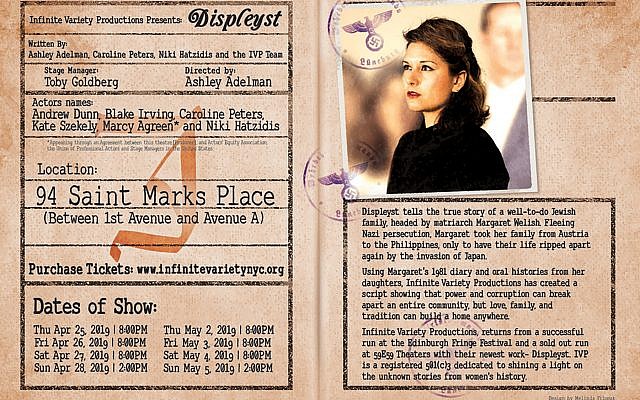 DISPLEYST
Using a 1981 diary of Jewish matriarch Margaret Welish, along with oral histories from her daughters, “Displeyst” tells the true story of a well-to-do family that successfully escaped from WWII Austria to the Philippines, only to have its life ripped apart again by the invasion of Japan. The play, by Infinite Variety Productions, echoes the present-day immigration crisis, and investigates how and why history seems stuck on repeat when it comes to the displaced. — Thursday, April 25-Sunday, May 5, Under St. Marks Place, 94 St. Marks Place, (212) 777-6088, infinitevarietynyc.org. 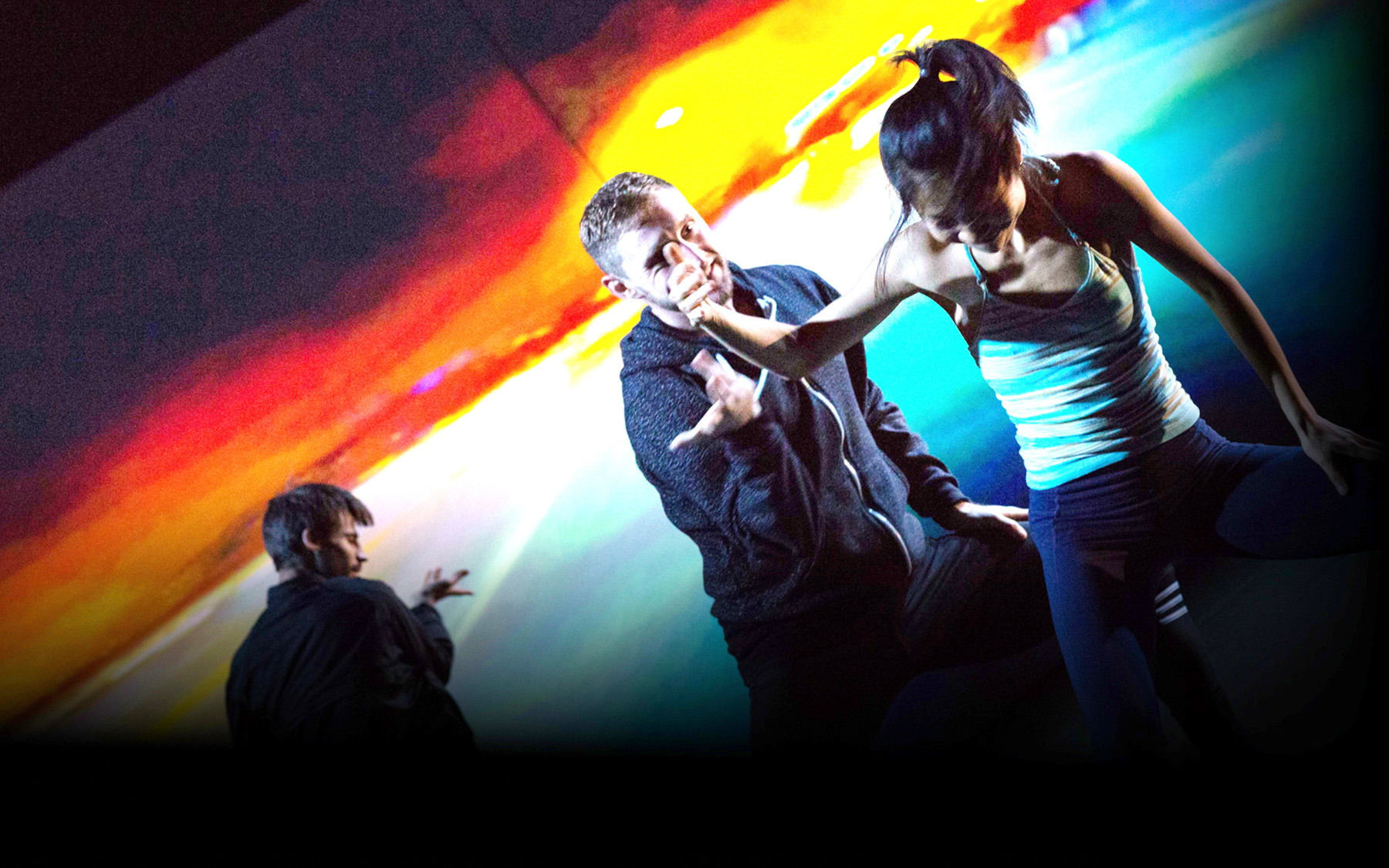 Led by Israeli-American artistic director Zvi Gotheiner, the ZviDance dance company is praised for its signature innovative style and radical melding of artistic mediums. “One does not just watch a dance by Zvi Gotheiner. One enters a world with its own internal logic, a sensual, organic world of movement, language, and images… ,” Dance Magazine writes. In its 2016 multimedia piece “On the Road,” inspired by Jack Kerouac’s iconic novel, Gotheiner contemplates the upheaval of the 1960s and that generation’s startling notions of social rebellion. The Times described this work as a “kinesthetically appealing combination of intense vitality and casual manners … marvelous, at times.” — Thursday-Saturday, April 25-27, Joe’s Pub, 425 Lafayette St., (212) 539-8778, publictheater.org.

DEAR ERICH
Composer-pianist Ted Rosenthal retells his own family history in the jazz opera “Dear Erich,” presented by the New York Opera and co-produced with the Folksbiene. Set in wartime Germany and Chicago, the plot is inspired by some 200 letters exchanged between Ted’s grandmother, Herta Rosenthal, and her son, Erich, a Jewish scholar who escaped to the States. Rosenthal employs the musical idioms of the 1930s and ’40s to create a poignant narrative of this correspondence, which tracks a son’s journey to the New World, and the family he left behind. Directed by Mikhaela Mahony, with a libretto by Lesley Rosenthal and Ted Rosenthal. — Wednesday, May 1, 7 p.m., Center for Jewish History, 15 W. 16th St., (212) 294-8301, programs.cjh.org. 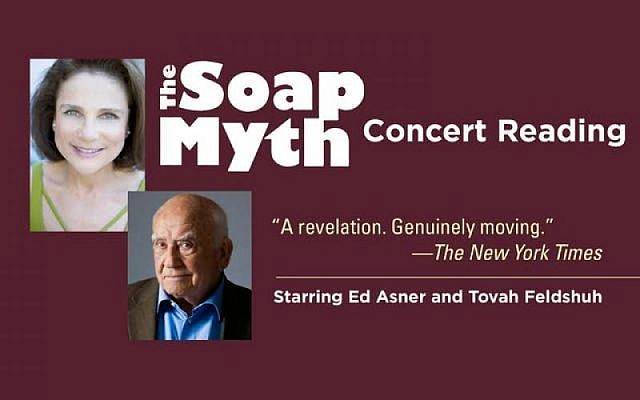 Emmy-winner Tovah Feldshuh and Golden Globe-winner Ed Asner team up in a concert reading of Jeff Cohen’s Holocaust-themed play. Dramatizing an evolving friendship between a young Jewish journalist and a cantankerous Holocaust survivor, the play poses the question of whether the Nazis actually made soap from the bodies of murdered Jews. This performance will be filmed by All Arts (allarts.org), a new broadcast channel and streaming platform. The evening also includes a post-performance discussion with the cast, creative team and Stefanie Halpern, acting director of the YIVO archives. — Monday, April 22, 7 p.m., Center for Jewish History, 15 W. 16th St., (212) 294-8301, cjh.org.

THE LEHMAN TRILOGY
The Lehman Brothers and their descendants built an investment bank that was supposedly too big to fail — until it imploded in 2008, taking the American economy down with it. Stefano Massini’s hit London production of “The Lehman Trilogy,” directed by Sam Mendes,  follows three generations of the Jewish banking family. — Through Saturday, April 20, Park Avenue Armory, 643 Park Ave., (212) 933-5812, armoryonpark.org.

YIDDISH FIDDLER, OFF BROADWAY
“Fiddler” in Yiddish, the unexpected runaway hit that both delighted and choked up audiences at the Museum of Jewish History, is now Off-Broadway. Directed by the acclaimed Joel Grey, a rich Yiddish translation by the late Shraga Friedman adds new, depth to the iconic musical. With English and Russian supertitles. — Stage 42, 422 W. 42nd St., (212) 239-6200, telecharge.com. 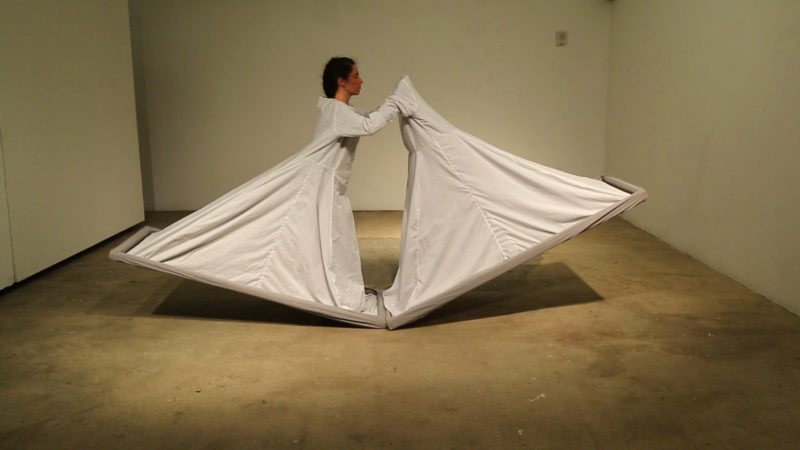 Exploring the materiality of the body and the garments it comes in contact with, Israeli-American interdisciplinary artist Ye’ela Wilschanski presents a sculpture that moves in relation to body/garment/architecture. Part of the Movement Research Performance Series. — Monday, April 22, 8 p.m., Judson Memorial Church NYC, 55 Washington Square South., movementresearch.org.

Aron is 88, Eazek, 94, and Claudine, 89. More than 70 years ago, although they lost their entire families, they survived the Holocaust and resettled in New York City. Now they are sharing their stories in a unique program led by a drama therapist with high school students in Brooklyn. The Witness Theater workshop they participate in culminates in a performance of a play based on survivors’ stories.  Screening followed by Q&A with the director. — Tuesday, April 30, 7-9 p.m., Marlene Meyerson JCC Manhattan, 334 Amsterdam Ave., (646) 505-4444, jccmanhattan.org.

THE ACCOUNTANT OF AUSCHWITZ

An account of the trial of Oskar Gröning, charged with the murder of 300,000 Jews. Part of “Saviors on the Screen,” and presented in commemoration of Yom HaShoah, Holocaust Remembrance Day. — Wednesday, May 1, 7 p.m., Marlene Meyerson JCC Manhattan, 334 Amsterdam Ave., (646) 505-4444. jccmanhattan.org.

YA QALBI (OH MY HEART)

CHAZAK VE’EMATZ
Composer/arranger/liturgist Steve Cohen premieres his new choral piece, “Chazak ve’Ematz” (Strength and Courage). The piece is performed by the Kol Rinah Chorale and conducted by Benjamin Gruder, as part of its spring concert, “Songs for the Heart and Soul.” — Sunday, April 28, 3 p.m., Shames JCC on the Hudson, 371 South Broadway, Tarrytown, N.Y.

The acclaimed Israeli-American guitarist claimed the No. 1 spot in the Rising Star-Guitar Category in the 2017 DownBeat Magazine Critics Poll. He has established a reputation for silky harmonies and easy lyricism — “a vision of modern jazz that’s harmonically fluent but not averse to simple melody or gentle, approachable effect,” as The Times wrote. Hekselman will play at the storied Village Vanguard with Mark Turner on saxophone, Rick Rosato on bass and Obed Calvaire on drums. — Thursday, April 30-Sunday, May 5, The Village Vanguard, 178 Seventh Ave. South, villagevanguard.squadup.com.

DESIRE, ENVY AND THE JEWISH-CHRISTIAN BORDERZONE
Are the borders and boundaries between religions any more secure than those between nations? Working with major Jewish modernist writers such as Sholem Asch and Henry Roth, Maeera Shreiber (University of Utah) questions and examines our assumptions about religious differences — and explores the high-voltage emotional consequences of trafficking in that volatile space of interfaith encounters she calls the Jewish-Christian Borderzone. — Sunday, April 28, 4 p.m., Center for Jewish History, 15 W. 16th St., (212) 294-8301, Cjh.org.

WOUNDS TO WISDOM
Do we carry the wounds of our ancestors in our genes? As the world faces fresh waves of anti-Semitism and aggression against women, iconic feminist Gloria Steinem talks with Rabbi Dr. Tirzah Firestone, author of “Wounds To Wisdom,” about the new field of intergenerational trauma healing. — Wednesday, April 24, 7 p.m., 92nd Street Y, 1395 Lexington Ave., 92y.org.

THE LOMBARD HAGGADAH
For Passover, Les Enluminures Gallery presents a series of events that center on a remarkable medieval manuscript: a Haggadah with 75 watercolor paintings, created in the circle of the famous 14th-century Italian artist Giovannino de Grassi. For the first time in more than 100 years, the manuscript will be on view for a limited period. — Through Sunday, April 20, Les Enluminures, 23 E. 73rd St., 7th fl., Penthouse, lesenluminures.com.

LEONARD COHEN: A CRACK IN EVERYTHING
Singer-songwriter Leonard Cohen, who died in 2016, was an extraordinary poet of the imperfection of the human condition. This show celebrates Cohen’s legacy through mixed-media works, including a video projection showcasing Cohen’s own drawings and a multimedia gallery where visitors can hear Cohen’s songs covered by other musicians. Through Sept. 8, The Jewish Museum, 1109 Fifth Ave., (212) 423-3200, thejewishmuseum.org.