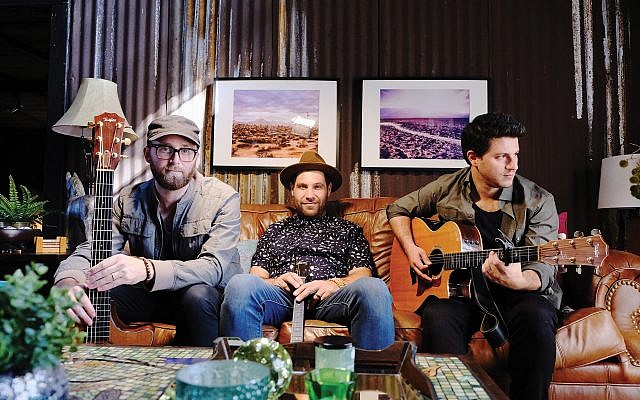 DISTANT COUSINS COMES HOME
Distant Cousins is an L.A.-based folk/pop trio with strong Jewish and local roots. Dov Rosenblatt, former lead singer of Blue Fringe (Disclosure: His father is this paper’s editor/publisher), and Ami Kozak graduated from a day school in Teaneck. Duvid Swirsky (Moshav band) grew up in Israel on the moshav founded and influenced by Rabbi Shlomo Carlebach. Having met years ago when their bands often overlapped, the three formed Distant Cousins in 2013 and their music has been featured in films like “This Is Where I Leave You,” Macy’s commercials, movie trailers for “Daddy’s Home” and “How to Train Your Dragon 3,” and on numerous TV shows. Their new album, “Next of Kin” (Jullian Records), was released last month. The review from Hollywood’s famous record store, Amoeba Records, described it as “filled with infectious hooks and floor-stompin’ riffs … Basically it’s the sound of your new favorite band.” — Wednesday, Feb. 27, 9 p.m., Debonair Music Hall, Teaneck; Thursday, Feb. 28, 8 p.m., Rockwood Music Hall, Distantcousinsofficial.com. 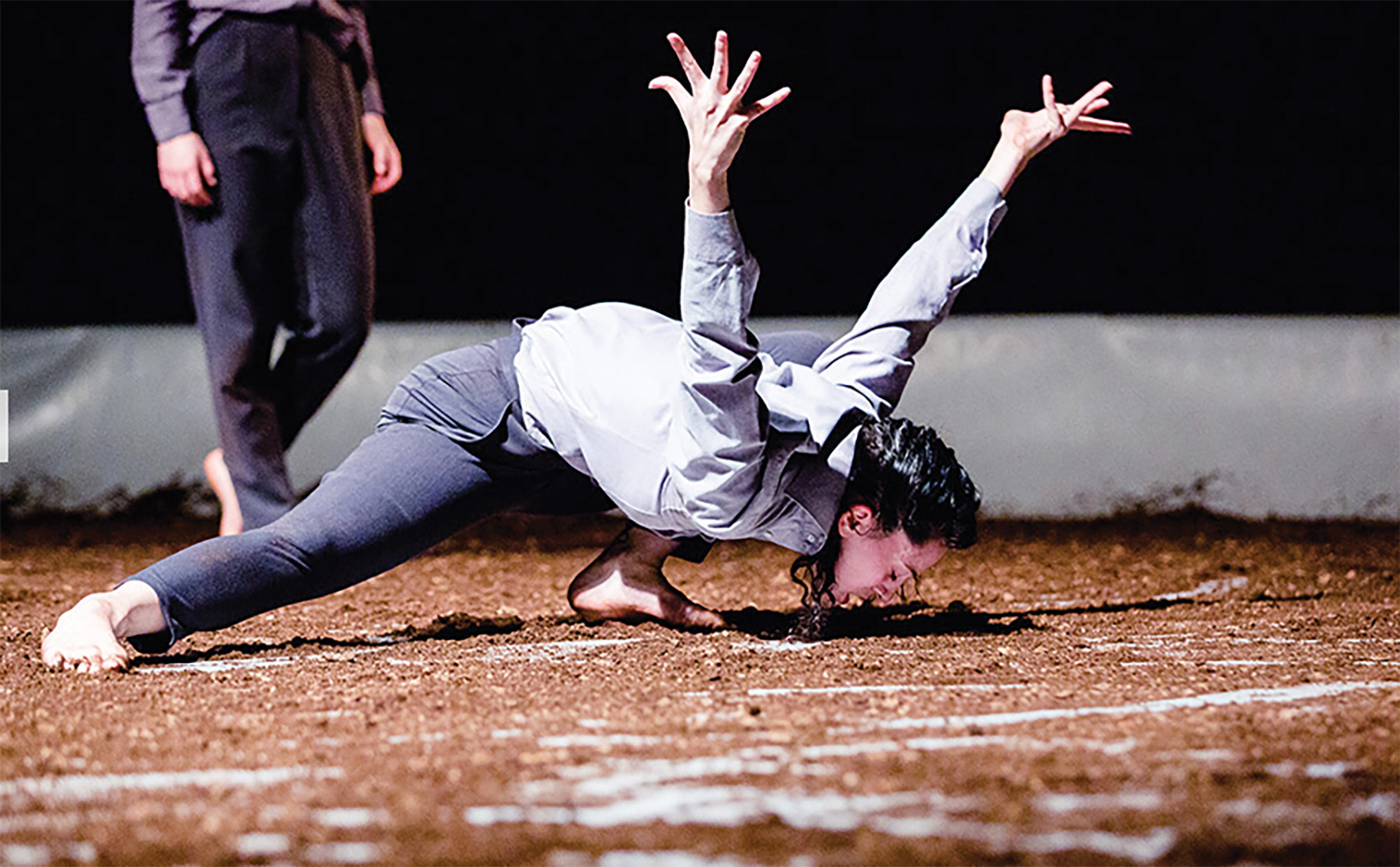 Choreographed by Noa Wertheim and set to a powerful score by Avi Belleli, the noted Israeli dance company Vertigo performs “One. One & One.” Unfolding on a dirt-covered stage, the work creates a sensory experience as it explores the individual’s desire for wholeness and spiritual connection to the natural world. The Jerusalem Post described it as “freer and fresher than ever.” — Tuesday-Wednesday, March 5-6, 7:30 p.m., Baryshnikov Arts Center, 450 W. 37th St., (646) 731-3200, bacnyc.org 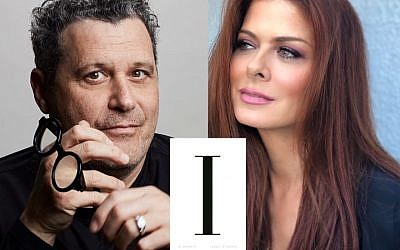 The fashion icon offers a candid look back on his life with the release of his memoir, “I.M. Isaac Mizrahi.” In conversation with Debra Messing (“Will & Grace”), Mizrahi will recount growing up gay in a sheltered Syrian Jewish Orthodox family, his rise, fall, and reinvention in the world of haute couture and his foray into musical cabaret. To celebrate the launch of his memoir, this will be Mizrahi’s only New York appearance and will include a special musical performance. A book signing will follow. — Tuesday, Feb. 26, 7 p.m., Symphony Space, 2537 Broadway, (212) 864-5400, symphonyspace.org

YIDDISH FIDDLER, OFF BROADWAY
“Fiddler” in Yiddish, the unexpected runaway hit that both delighted and choked up audiences at Museum of Jewish History, is now Off-Broadway. Directed by the acclaimed Joel Grey, a rich Yiddish translation by the late Shraga Friedman adds new depth to the iconic musical. With English and Russian supertitles. — Stage 42, 422 W. 42nd St., (212) 239-6200, Telecharge.com.

Celebrating the 121st birthday of Yiddish theater and film star Molly Picon, this screening of the silent classic “East and West” (1923) is accompanied by a live score performed by clarinetist Michael Winograd and featuring the composer of the original score for the 1991 re-mastered film, Pete Sokolow. — Sunday, March 3, 4 p.m., Center for Jewish History, 15 W. 16th St., (212) 294-8301, cjh.org.

Bringing traditional Yemenite prayers and melodies into the world of funk, soul, blues and jazz, the ensemble Yemen Blues — “a band that must be on your radar, regardless of your preference for genre” (DownBeat) — occupies a unique world music perch. This performance features the pared-down crew of Kahalani, percussionist Rony Irwyn and bassist/oudist Shanir Blumenkranz. — Sunday, Feb. 24, 8 p.m., Brooklyn Bowl, 61 Wythe Ave., Brooklyn, brooklynbowl.com.

Daniel Gwirtzman — producer, director, educator, filmmaker and dancer — marks 20 years as a New York choreographer and company director. His diverse repertory has earned praise for its humor, stylistic versatility, musicality, charisma and accessibility. “Mr. Gwirtzman does know that in dance less can be more. And that’s a good thing for any choreographer to know,” wrote The New York Times. Gwirtzman sifts through two decades of repertory (“Tribe,” “The Oracle,” etc.) for this anniversary show.  — Friday-Saturday, Feb. 22-23, 8 p.m., 92nd Street Y, 1395 Lexington Ave., 92y.org.

HOW TO FIGHT ANTI-SEMITISM
New York Times columnist and Pittsburgh native Bari Weiss has become known for her insightful, passionate columns about the resurgence of anti-Semitism. What she most often hears from readers is: What can we do about it? — Monday, Feb. 25, 7 p.m., Temple Emanu-El Streicker Center, 1 E. 65th St., (212) 507-9580, emanuelstreickernyc.org.

ANTI-SEMITISM IN THE UNITED STATES
In the wake of the attack on Pittsburgh’s Tree of Life Synagogue, anti-Semitism in America fosters debate. To what extent is America different from diaspora countries? Do more recent events warrant a change in our understanding, or is this part of longer patterns? Historians Lila Corwin Berman, Tony Michels and Jonathan Sarna debate. Documents and images from the AJHS archives will punctuate the conversation. — Wednesday, Feb. 27, 7 p.m., Center for Jewish History, 15 W. 16th St., (212) 294-8301, cjh.org.

SOL
Israeli-American artist Daniel Rozin probes the relationship between the function of natural and mechanical structures. The exhibited works employ a combination of custom software and organic materials to mimic and interact with the viewer’s body in space. — Through March 17, Bitforms Gallery, 131 Allen St., (212) 366-6939, bitforms.art.

MARTHA ROSLER: IRRESPECTIVE
Brooklyn yeshiva-educated Martha Rosler is considered one of the strongest and most resolute artistic voices of her generation. (She has said that her Jewish education inspired her politics.) She skillfully employs diverse materials to address pressing matters of her time, including war, gender roles, gentrification, inequality and labor. From her feminist photomontages of the 1960s and ’70s to her large-scale installations, Rosler’s work reflects her enduring and passionate vision. — Through March 3, The Jewish Museum, 1109 Fifth Ave. (at 92nd Street), (212) 423-3200, thejm.org.