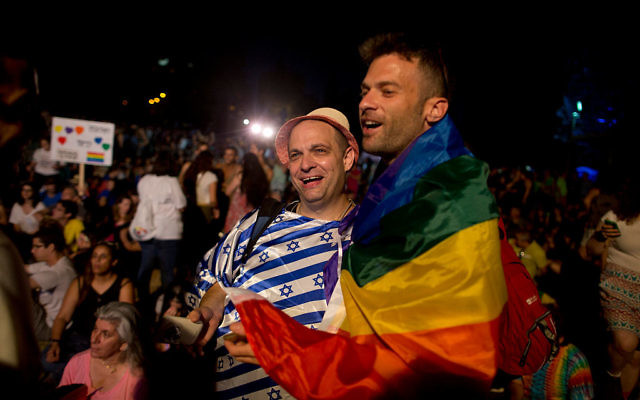 As 25,000 people march through the streets of Jerusalem to celebrate LGBT pride, Israeli rabbis, institutions and politicians are trading barbs over inflammatory comments made by the head of a pre-military yeshiva in the West Bank. And a New York Orthodox yeshiva is now joining the fray.

“Yeshivat Chovevei Torah Rabbinical School joins the many rabbis, government officials, and institutions in Israel in rejecting the hurtful and unacceptable words of Rabbi Yigal Levenstein” the liberal Modern Orthodox rabbinical school wrote in a statement posted to its website.

Chovevei, which is located in Riverdale, condemned Rabbi Levenstein after a speech he gave at the “Zion and Jerusalem” conference last week. A video from the conference, which was attended by 700 rabbis and educators, was posted online.

During the speech, Levenstein labelled the Reform movement a “Christian movement,” and criticized the Israeli army for allowing gay men to serve. “Soldiers and officers are taught to refer to [LGBT people] as ‘proud,’ but I don’t dare call them that … ‘perverts’ is what I call them,” Levenstein said at the conference.

The backlash from Israeli officials came swiftly and strongly from both sides of the political spectrum. Education minister and prominent religious Zionist leader Naftali Bennett quickly distanced himself from Rabbi Levenstein. “The things that have been said are not acceptable to me and are not the path of religious-Zionism,” Bennett told the Jerusalem Post. Opposition leader Isaac Herzog said, during a Knesset meeting, that the statements represent “an intifada of dark, internal hatred.”

Criticism of Rabbi Levenstein has not been universal. The rabbi received support from some 300 Israeli rabbis who refer to themselves as the “silent majority.” The group includes the chief rabbi of Tzfat, Shmuel Eliyahu, who said he disagreed with describing members of the LGBT community as “deviants” but agreed with Rabbi Levenstein’s central premise.

Another defender is Rabbi Avrohom Gordimer, an executive member of the Rabbinic Council of America. In an op-ed that was first posted on the online publication Cross Currents, Gordimer responded to YCT’s condemnation by suggesting that by condemning Levenstein, Chovevei Torah is implicitly condemning the late Rav Yosef Soloveitchik. Since Rav Soloveitchik, a prominent Modern Orthodox thinker, had made similar statements against LGBT and Reform Jews, Rabbi Gordimer asks whether condemning Rabbi Levenstein is also a condemnation of Rav Soloveitchik. Gordimer is a frequent critic of Open Orthodoxy, a liberal stream of Modern Orthodoxy.

Although this instance of homophobia from an Israeli rabbi received special condemnation from Chovevei, it is hardly a unique occurrence. Jerusalem’s mayor Nir Barkat chose not to attend today’s LGBT pride parade so as not to offend religious Jerusalemites and the city of Be’er Sheva cancelled their parade entirely.

The Israeli Defense Ministry called Levenstein’s comments “unacceptable” and demanded he explain his comments to them over the next few days as they rethink their relationship with the rabbi.