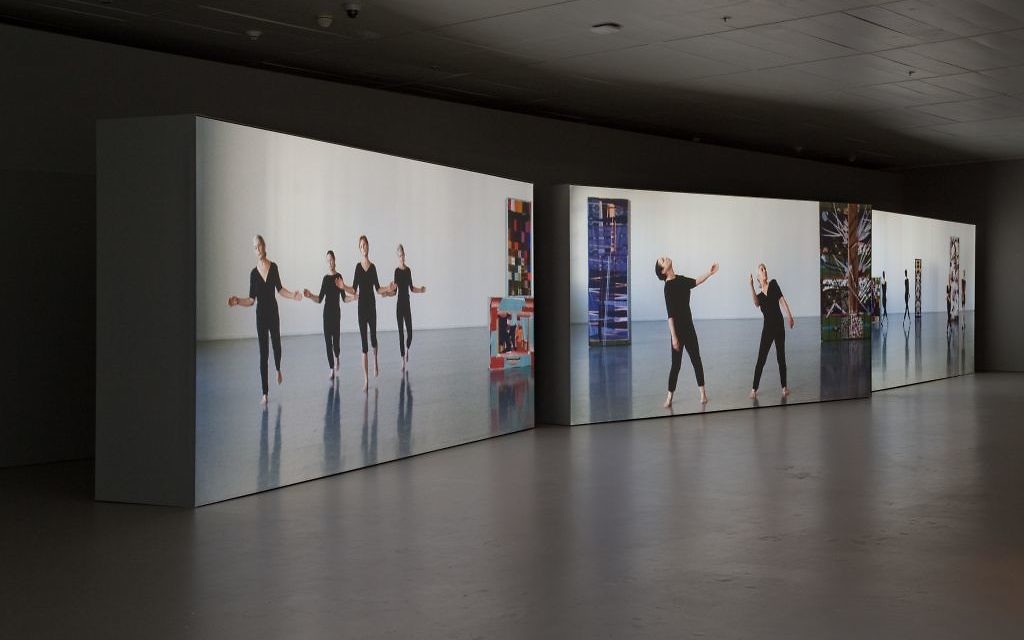 These are not glamorous people.

With their lined faces and gray hair, they are deceptively unstudied in their movements, moving their seasoned bodies with relaxed precision. Clearly they have been walking on this earth for a while now. Step forward, stop, sink, twist, look up at the sky, or is it the ceiling of your own imagination, pause, resume: This is minimalist dance where the routine meets the composed, where the subtly virtuosic appears pedestrian. Two women face each other. Lights out. Light on. The women are still there, moving but unmoved. Emotion is restrained but implicit, kinesthetically communicated. Achat sthaim… the calling out of the 4/4 rhythm in Hebrew along with the constant ticking of the metronome unites the viewer with the projected duos, trios and group figures in each of the giant film installations.

“Sharon Lockhart/Noa Eshkol,” now at the Jewish Museum, is all about encounters: The L.A.-based internationally-acclaimed installation artist Lockhart engages with a selection of dances choreographed by the late Noa Eshkol, Israeli composer, notator and textile artist. The ordinary way we move encounters the two distinct artists’ subtly transformative sense of space, time and gesture. Eshkol, who stitched fabric remnants together to create giant wall carpets, never combined textile and dance. Here in Lockhart’s films, for the first time the rugs provide décor for the dance.

That morning I am a sole visitor in the vast ground floor gallery with its sculptural projections. I discover that by standing just in front of a ceiling light, my entire shadow self is projected into the screen with the dancers. Magically, I traverse from my world into theirs. The group pauses to rotate a shoulder, to tilt a head, they kneel, they sink, they give into gravity. I move as one of them. The women pitch to the side as if tugged by a heavy bag of groceries, an arm hinges as if broken at the elbow, there are frequents shifts in weight as they casually lunge from left to right. The seconds tick away at the same rate for all of us. Soon enough, the guard strolls over, puzzled, folding his arms and shaking his head at my irregular behavior. I want to tell him that his controlled agitation is also part of the encounter.

The exhibit includes two more rooms, one with technical drawings based on the Eshkol/Wachman system in which symbols and numbers notate every perceptible movement of the body. Two of Eshkol’s more than 500 wall carpets are displayed in the third room. Is it serendipitous that one of them, an engaging patchwork of tussah silk, bone lace and corduroy chosen by Lockhart, is called Elijah’s Throne? Legend says the Elijah must be present at every circumcision since we never know which seemingly ordinary child might turn out to be the messiah. Lockhart has been discerning and distilling presumably ordinary movements for decades. Whether dancing, analyzing, composing or creating textile, Eshkol always found the redemptive in the every day.

“Sharon Lockhart/Noa Eshkol” is on view at The Jewish Museum until March 24th.