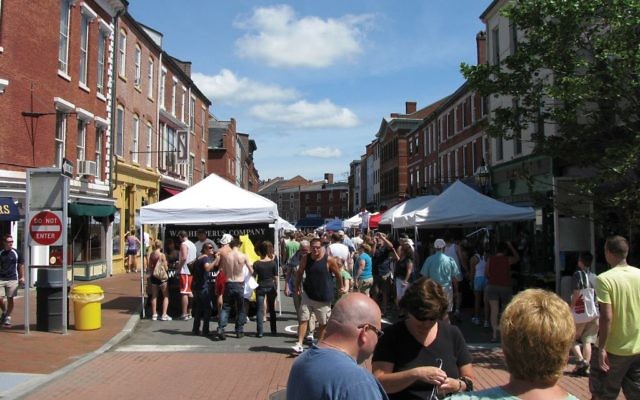 Newburyport, just north of Boston, has access to some of the prettiest area shoreline along Plum Island, a barrier island and wildlife refuge. Meanwhile, Portsmouth lies a short jog up I-95 — or a half-hour south of Ogunquit, Maine — and boasts a 1600s-era seaport with one of the country’s best-preserved collections of Colonial and Federal-era architecture.

Today both towns are touristy without being overcrowded, accessible for coastal drivers, and abundant in the classic, all-American activities (ice cream!) that vacationing families cherish. Unlike other regional hot spots, these destinations have substantial year-round populations and feel like real places, not resorts.

They are also places with deep Jewish roots. Congregation Ahavas Achim, a pretty clapboard synagogue, has served Newburyport’s diverse community since 1896. Meanwhile, Portsmouth Jews have gathered for over a century at the red brick Temple Israel, New Hampshire’s oldest synagogue, where the interior craftsmanship is itself a worthy sight.

A short drive north of Boston, but with far easier parking, Newburyport makes an excellent stop off I-95. Along State and High streets, airy modern cafés and galleries stand alongside landmarks like the 1750s church and an 1805 courthouse.

On a sunny day, you’ll want to head for Plum Island, the barrier whose beach extends southeast down the coast and includes the pristine marshes and sparkling, limpid coves of the Parker River National Wildlife Refuge.

The area is a favorite of kayakers and birdwatchers; a network of wooden paths invites exploration on foot or bike, while the sandy beaches along the bay are among the area’s nicest. (A note of warning: Several people told about July invasions of biting horseflies, so check before you go.)

If the flies are biting — or the weather isn’t cooperative — check out the Custom House Maritime Museum inside a lovely old building designed by the architect of the Washington Monument. Maritime museums are common across New England, but this one is a particularly fun example of the genre, with a coloring station and an interactive ship’s bell for kids, and plenty of whaling artifacts, ship replicas and shipwreck lore.

Indeed, water is the defining feature of the mid-New England coast — from tide pools and bays to rivers, boat-filled harbors and crashing blue ocean surf. On the New Hampshire-Maine border, the Piscataqua River separates Portsmouth from Kittery, Maine, lending both towns a waterscape of steel bridges and sailboats en route to the Atlantic.

Only slightly larger than Newburyport, Portsmouth has a stately, more urban feel. That probably owes to its historical importance as a regional seaport and the jewel of New Hampshire’s tiny coast.

The harbor where Paul Revere hung out has been updated as a delightful waterfront neighborhood, centered around the vibrant cafés and landmark buildings of Market Square. You’ll find pubs with whimsical names like the Rusty Hammer and the Thirsty Moose, along with plenty of ice cream shops, quirky bookstores and scrimshaw jewelry.

Watch sailboats, yachts and ferries come and go; prowl the rusty anchors around Tugboat Alley, or catch a ride on a tugboat cruise for open-water views around the harbor.

Sooner or later, the beach will beckon — but save some daylight hours for a unique outdoor experience known as Strawberry Banke Museum. The region’s oldest settled neighborhood has been preserved as a collection of nearly 40 restored buildings dating from the 17th to the 19th centuries; you can admire mahogany banisters and claw-foot tables inside nine of the period-furnished houses.

Downtown Portsmouth is itself something of an open-air historical museum. Georgian Revival and stone whaling-era buildings have been lovingly preserved along red-brick sidewalks. Lighthouse connoisseurs can tour the 1800s specimen at Portsmouth Harbor; fans of Victorian-era theaters might catch a film or concert at the city’s Beaux-Arts landmark, The Music Hall. At Prescott Park, an outdoor summer festival brings near-daily events, from poetry to an appearance by Mary Poppins.

Ready for a beach? Just south of Portsmouth on the open Atlantic, the area’s best spot for fun in the sun is the popular Wallis Sands State Park. Parking isn’t too bad if you get there early, and Wallis Sands has all the amenities families look for.