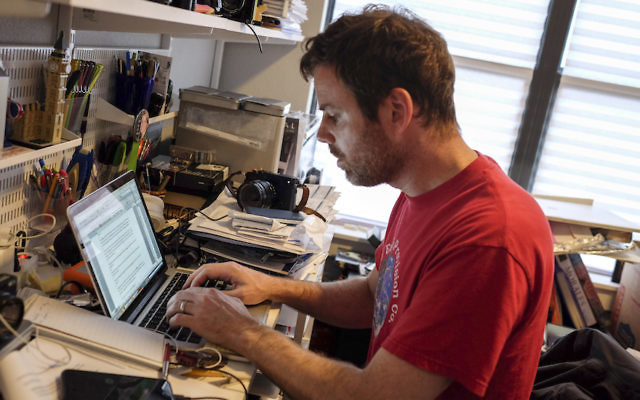 Michael Duke, associate editor of the Houston Jewish Herald-Voice, abandoned his SUV in the flooding but still managed to write his articles. (Courtesy of Duke)

JTA – As Hurricane Harvey bore down on Houston Friday, Vicki Samuels Levy dashed over to the offices of the Houston Jewish Herald-Voice, took the proofs of this week’s newspaper and went to her mother’s house.

Then mother and daughter spent all night editing the paper. And as the waters rose and they had to be evacuated to a neighbor’s house the next day, the proofs were in hand, ready for the printer.

“We want to help each other as family members, then we have to stop and do things for the paper,” said Samuels Levy, the paper’s CEO. “I couldn’t leave to go to my mother’s home before I checked all these pages.”

The mother, Jeanne Samuels, is also the owner and editor of the Jewish Herald-Voice. Samuels Levy’s husband, Lawrence Levy, runs its circulation, and her son, Michael Duke, is its associate editor and news reporter. Her nephew Matt Samuels writes sports and helps with production.

And this week, despite the storm waters deluging the city, the family is determined to keep the paper publishing. Founded in 1908, it has never skipped an issue.

“We’ve been through this before, and we had a contingency plan in place,” Duke said. “We haven’t missed a print issue for 109 years. We’re hoping this isn’t the first time.”

Although the work is mostly computer based, the flooding has made it an arduous task to put together the paper. Samuels Levy and her mother were forced to move, along with more than a dozen others, into a neighbor’s house Saturday when flood waters got too high. When David Levy discovered a computer glitch, he had to wait three days to get to the office and address it.

Duke abandoned his SUV after driving two strangers to a relative’s house; the vehicle died on the trip home. He and his wife had to wade a half-mile through waist-high waters to make it back, after which Duke began working again. He has managed to report everything remotely, posting on the paper’s website a series of articles on everything from families’ homes being flooded for the third time to a Mormon with an air boat rescuing 100 people in a Jewish neighborhood. By Wednesday morning, the website included more than 20 stories on the storm’s impact.

In the midst of it all, Duke saved his wife’s car from being crushed by a tree, moving it 10 feet just in time. Like friends of theirs, the couple plans to host less fortunate families in their (mostly) dry house as soon as the waters recede enough to allow travel.

“The hard part was on Sunday and Monday, when I was on the phone with people I know and love who were climbing onto kitchen counters and going on the roof waiting for rescue boats to come,” Duke said.

As of Wednesday morning, the family was putting the finishing touches on this week’s issue. The printer said it hopes to be back up and running on Thursday evening, and the newspaper was awaiting word from the service that labels and mails the copies on Friday mornings. The Jewish Herald-Voice will offer a free e-edition.

Duke has spent the week worrying about his family. But now that everyone is safe, he said, at least they can worry about the paper together.

“It’s been hard because for the first time, we’ve had family members directly impacted by the flood,” he said. “It draws your attention in different directions, but because we’re family and we’re all connected, we can lean on each other a little more.”