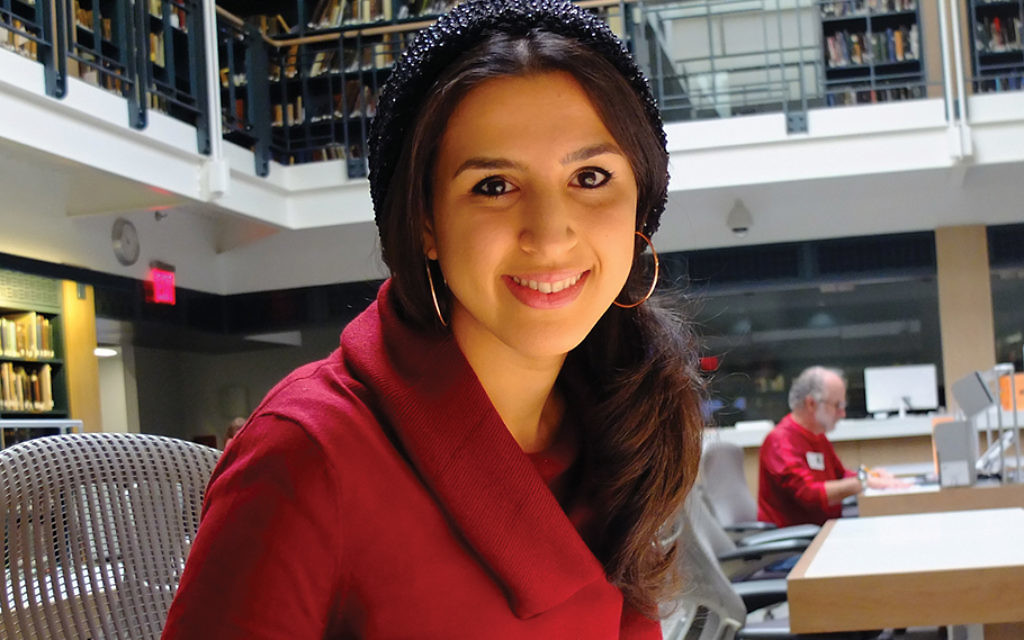 Mijal (pronounced Michal) Bitton is a doctoral candidate at New York University, where she studies the experience of contemporary Sephardic communities in the United States. She is a doctoral fellow and faculty member at the Shalom Hartman Institute of North America. Bitton has been awarded an AVI CHAI fellowship for her studies and is an alumna of the Wexner Graduate Fellowship. A writer and educator, she was born in Argentina, lived in Israel and now resides in Lower Manhattan. She spoke to The Jewish Week via email.

What inspired your choice to focus your doctoral research on the Syrian-Jewish community in N.Y.?

I grew up in a home where Sepharadi life was understood as offering an alternative narrative of what it means to be Jewish in the world and specifically in America. As I began exploring literature in the social scientific study of Jews and other religious/ethnic minorities in the United States, I realized that there is a significant gap in the knowledge of American Sephardim that could shed light on my own narrative. Specifically, Sepharadi Jews who immigrated to the United States from Middle Eastern and Muslim countries in the 20th century are very much understudied — we have yet to develop categories of Jewish-American religiosity and ethnicity devoid of Ashkenazi and Western genealogies. I am conducting this research because I want to help remedy this gap and to enrich scholarship on American Jews and more generally, American religion and ethnicity.

What can the wider Jewish community learn from the Sephardic community?

I cannot comment on what others could learn, but can mention some aspects of Sepharadi living that I appreciate. Specifically, I love many aspects that derive from the emphasis on collective living that is often found in Sepharadic communities. In an America that is characterized by the individualism described in Robert Putnam’s “Bowling Alone,” societies that produce strong relationships are increasingly valuable. Sepharadi individuals that I interview describe how their lives are infused with meaning and vibrancy by belonging to a socially dense extended family — a community where people know them by name, where they reach out if they need help, and where, as a woman I know once mentioned, “you feel as if you are never alone.”

I also think that Sepharadic communities can offer an important model for how to treat elderly parents and grandparents. I know of many Sepharadi social groups that have arranged their infrastructures in ways that allow the aging generation to actively participate in community life. In this sense, reverence for family translates into care for the elderly.

What about spirituality? Do you find that in the larger Sephardic community, that there is a distinctive sense of spirituality?

I have found in many Sepharadi social groups a certain spiritual “unselfconscious coherence” — borrowing a term from theorist Benedict Anderson. Let me explain. I often hear Ashkenazi individuals describe seeming contradictions in the Sepharadi way of religious living. How come many Sepharadi women dress ‘immodestly’ (according to Jewish Orthodox standards) and still pray with seemingly strong devotion? How come many Sepharadi men do not wear kippot in public yet attend to other religious obligations scrupulously?

I see these seeming contradictions as reflecting an American Sepharadi traditionalism (in Hebrew – Masortiyut) similar to the traditional practice of Mizrahim in Israel. Traditional individuals often feel comfortable taking on some commandments and not others, or appearing “more Jewish” at different times than others, without affecting their own self-perception as religious individuals. Characterizing this compartmentalization is what I understand as an unselfconscious coherence in which individual religious variance is accepted within a coherent narrative of Judaism.

This traditionalism — which challenges the religious-secular binary — helps foster a sense of spirituality that is not necessarily connected with keeping Jewish law, but might be reflected more holistically in people’s daily living. I hear God mentioned constantly in Sepharadi settings that I study; God’s name is present on people’s lips in a very natural way, not necessarily connected to their ritual observance levels.

I have a friend who is from Morocco, who sees Jews from Arab lands as having the potential to help bridge the Arab and Jewish worlds, and to have some role in the peace process in the Middle East. Would you agree?

Your friend’s words might reflect the particular experience of Jews in Morocco, where the local population has shown tolerance and friendship to the Jewish community. This is not the case in all other Sepharadi communities. Many people I speak with are still living with memories of having experienced terrible conditions in Arab lands after the declaration of the state of Israel. Jews in Syria, for example, were held as virtual prisoners (not allowed to leave the country without paying a fine and leaving family members as guarantors behind) for decades. I am not sure that Sepharadi and Mizrahi individuals who still recall their suffering in their countries of origin can help bridge the Arab and Jewish political worlds at this point, since there has been no collective process of reconciliation.

I myself feel a strong affinity for the Arab and Muslim culture that helped shape my Sepharadi Judaism. … I hope that we — as Sepharadi Jews with roots in the Middle East — can draw from our heritage to work towards lasting peace and understanding.

How can the broader North American Jewish community become more sensitive to diversity in ethnicity and religious practice represented by Sepharadi communities?

The most important thing is to begin being careful with our language. Not all American Jews are Ashkenazi. Not all came from Europe. Not all identify as white. Not all follow Ashkenazi halacha. Not all who are religious belong to a Jewish denomination. I hope that American Jewish organizations apply the language and values of diversity to include the experiences of American Sephardim. I would urge teachers who make syllabi to not write “Jewish” if what they mean is Jewish-Ashkenazi. I will never forget walking into high school classes and having to ask teachers to include Sepharadi experiences in classes that were simply termed “Jewish law” or “Jewish history.” I would also ask that individuals and organizations make sure that Sephardim are not viewed or treated as exotic, but simply as another type of American Jews.

Can you share a ritual you practice, that is distinctive to Sephardic homes?

One of my favorite Sephardi rituals is the Havdala ceremony at my grandparents home. My grandparents — who moved to Israel from Melilla, Spain — conduct a lengthy Havdala ceremony that can take over an hour. The ceremony is filled with pizmonim (traditional Jewish songs), berahot (blessings) on food, blessings for all my grandparents’ children, grandchildren and great-grandchildren, and prayers for those in need. While I have not retained the hour-long ceremony, there is a small minhag (custom) that I — and many Sepharadim — practice. As soon as we say the first Havdala blessing over the wine we laugh — we laugh loudly even if we don’t feel like laughing. We laugh to welcome in the new week and to infuse our days with happiness.