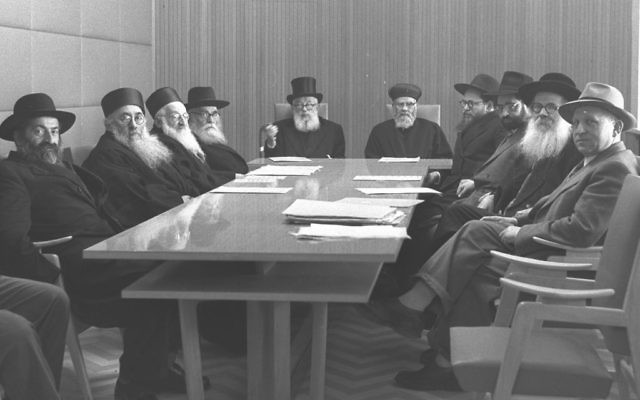 The setting was the annual dinner of the SAR Academy, a leading Modern Orthodox day school in Riverdale, enrolling over 1000 students from homes throughout the tri-state area. SAR’s long-standing school president closed the evening by applauding Rabbi Avi Weiss for his tireless advocacy on behalf of the Jewish people in the face of the Chief Rabbinate of Israel’s efforts to delegitimate him. A standing ovation ensued. For one evening, at least, grass-roots Modern Orthodoxy had spoken out in unequivocal opposition to the senseless and arbitrary actions of Israel’s Chief Rabbinate.

Unfortunately the same cannot be said of Modern Orthodoxy’s leadership and communal institutions.

We are forced to agree with Elli Fischer’s observations (Jewish Week, Opinion, Jan. 31) that the bureaucratic compromise reached between the Rabbinical Council of America (RCA) and the Chief Rabbinate to accept Rabbi Weiss’s testimony on personal status matters, in effect, enhances the exclusive authority of the Chief Rabbinate and actually aligns the RCA with the Chief Rabbinate even more closely than previously. When applauding these developments, however, Fischer conveniently omits mentioning that domestic pressures coupled with American Jewish interventions caused the Chief Rabbinate to retreat from its stance. Nor does he acknowledge that the RCA stood by silently for months while Rabbi Weiss, its own member for longer than many of its officers, and indeed others of its members as well, were being systematically discriminated against by that very same Chief Rabbinate.

Ironically, then, Fischer praises the RCA for its leadership during this affair and celebrates its becoming de facto a “Chief Rabbinate for America.” Moreover, he closes by noting that “for the forseeable future… (the RCA) must cultivate and maintain its relationship with the Rabbanut.” His analysis and prescription are faulty on several counts:

First, creating an RCA equivalent of a chief rabbinate on American shores is both myopic historically and unwise programmatically. A century ago, Jewish leaders brought Rabbi Jacob Joseph to the U.S. from Europe and bestowed upon him the title of “Chief Rabbi.” The experiment turned out to be a disaster. The American ethos of democracy and pluralism has long encouraged divergent expressions in all walks of life, including religion. Not surprisingly, establishing a chief rabbinate with exclusive authority proved dissonant with those norms and predominant American culture. Attempts to revive the idea today risk importing the most undesirable features of the Israel Chief Rabbinate, be they irresponsible pronouncements denigrating the liberal Jewish religious movements, statements damaging the positive relations of Jews and non-Jews in this country, or creating tangible human tragedies in areas of personal Jewish status.

Second, as we have indicated, the RCA, contrary to Fischer, hardly covered itself with glory during the Rabbi Weiss saga. Fischer concedes that RCA officials reportedly lobbied the Chief Rabbinate to disenfranchise Weiss, and that at least four RCA executive committee members posted blogs “justifying or at least expressing sympathy for the Rabbinate’s refusal to accept Rabbi Weiss’s letters.” The RCA statement of “neutrality” on the question was tepid at best and somewhat disingenuous at worst. At no time did the RCA move to censure those officials that had slandered Rabbi Weiss, thereby violating Jewish law as well. Indeed, the RCA has never revealed who those officials were; and for their part, those rabbis have never had the courage to own up to their actions.

Under Chief Rabbis Kook, Uziel, and Herzog, the Chief Rabbinate of Israel charted a bold path towards defining Israel as a democratic Jewish state coping with the challenges to Jewish law and tradition posed by modern culture and technology.

In recent decades, however, the Chief Rabbinate has been dominated by haredi rabbis. This in itself poses a paradox: The official voice of Judaism in the Jewish state is vested in non-Zionist rabbis who attach, at most, only utilitarian value to the very idea of a Jewish state absent a messianic redeemer.

The RCA, to be sure, continues to define itself as Modern Orthodox. But its deference to the haredi Chief Rabbinate as halachic decisor for the State of Israel suggests that Modern Orthodoxy in America, in the RCA’s judgement, lacks the necessary courage to mount a persuasive and truly Modern Orthodox vision for the Jewish people in the face of haredi detractors. The latter, by contrast, dismiss Modern Orthodoxy as an artificial concession to religiously lax Orthodox Jews rather than a bold and exciting set of ideals and values to be emulated and realized.

This last issue far transcends the question of Rabbi Weiss’s personal standing. Rather, his case challenges the Modern Orthodox community to recapture its distinctive and independent voice and escape the shackles of those who relegate it to an at best second-class, albeit tolerated, status within contemporary Judaism. Whether Modern Orthodoxy has the courage and verve to do so remains questionable. Yet the stakes in this struggle could not be higher: The future ethos of the Jewish state and the future unity of the Jewish people rest in many ways on the putative emergence of a truly Modern Orthodoxy capable of forging a distinctive synthesis of Jewish tradition and modern culture and serving as a bridge connecting divergent sectors of the Jewish people. Rabbi Avi Weiss and the institutions he has established appear ready for that task. The RCA, by contrast, is not.