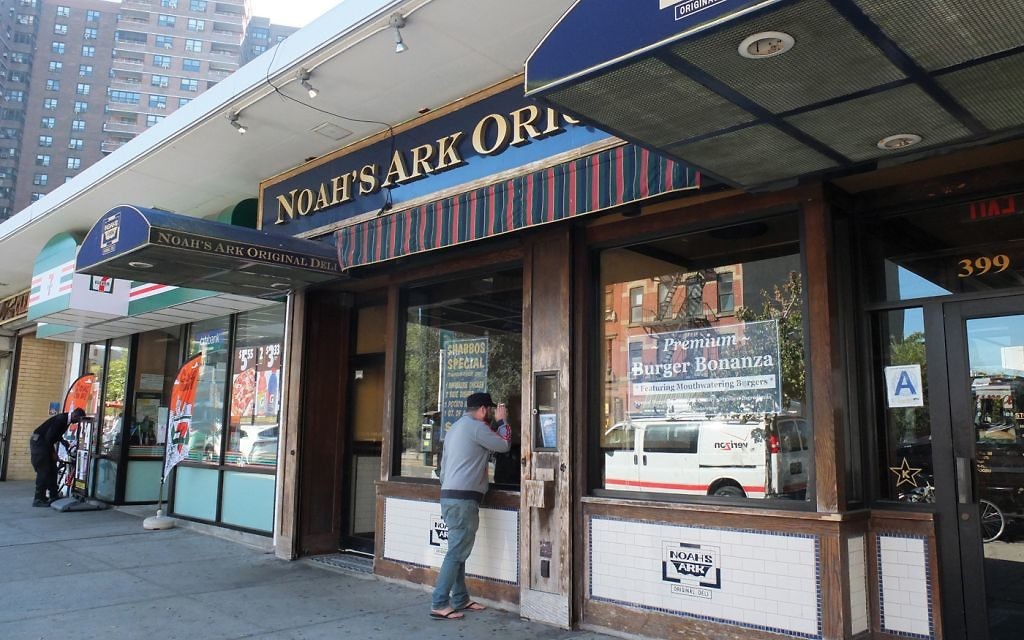 Laurie Tobias Cohen, the executive director of the Lower East Side Conservancy, and herself an observant Jew, thinks so.

Even as her organization organizes tours of sacred Jewish sites in the neighborhood, she has few kosher places to steer groups for lunch. She sees kosher dining options blossoming on the Upper West Side, in Riverdale and in Teaneck, N.J. — but not on the Lower East Side, where she said an older, more traditionally Orthodox community resides.

“Notions of eating out on a daily basis are very American,” Cohen pointed out. “People down here don’t have it in their Jewish DNA to spend money in restaurants.”

While she and her staff did send tour groups to Noah’s Ark, which opened on Grand Street in 2003, they found the prices there more expensive than a boxed lunch from a Midtown kosher deli like Ben’s, located near Penn Station. Most tourists, both Jewish and non-Jewish, don’t keep kosher anyway, she noted, and tend to end up Katz’s, the iconic non-kosher deli on Houston Street.

Cohen also pointed out that Noah’s Ark, which rented space from the Seward Park Cooperative, was “not in a particularly touristic part of the neighborhood — unlike the old Second Avenue Deli, which had an “ideal location in the East Village with its historic, hipster vibe.”

Yet Noah’s Ark had some notoriety of its own; it was a hangout of Assembly Speaker Sheldon Silver, who dined there in 2005 with Michael Bloomberg to discuss the mayor’s plans for a football stadium on the West Side.

Rabbi Josh Yuter, the spiritual leader of the Stanton Street Shul, located four blocks north of Grand, says the loss of a kosher restaurant is significant. “The cultural perception of a thriving Jewish community is based on the number of kosher restaurants that it supports,” he said.

Rabbi Yuter echoed Cohen in noting that many Orthodox residents of the rapidly gentrifying neighborhood, where a one-bedroom apartment can cost upwards of $500,000, are aging and not wealthy; they either inherited their apartments or bought them decades ago, before the co-ops privatized and starting selling units on the open market.

Further, the lack of an eruv — a symbolic boundary that permits carrying objects and pushing baby carriages outside on the Sabbath — discourages young Orthodox Jewish families from moving in.

There are other arguably kosher restaurants in the area, like the organic vegan restaurant Caravan of Dreams and the pan-Asian vegan café Wild Ginger, but they are not supervised by any nationally recognized kosher certification agency. (Noah’s Ark was under the supervision of Star-K in Baltimore.) Without Noah’s Ark, Rabbi Yuter said the neighborhood no longer has “authentically Jewish cuisine that was authentically kosher too.”

Nevertheless, according to Rabbi Yuter’s colleague, Zvi David Romm, the rabbi of the Bialystoker Synagogue, located around the corner from the site of the deli, the demise of Noah’s Ark is about the “closing of a particular establishment, not about the closing up of life on the Lower East Side.”

So why did Noah’s Ark pull up stakes?

A resident of the Seward Park co-op, who asked to remain anonymous, said that the restaurant had been declining for years — unlike the deli’s flagship location, owned by the same couple, Noam and Shelly Sokolow, in Teaneck. “It was no secret that the place was not full,” he said, “and that the prices were rising and the quality going down. The owners were trying to save a sinking ship.”

While the deli had a good deal on rent — $5,500 a month — it could not sell enough sandwiches, even at close to $20 apiece, to keep the place afloat. Efforts by the co-op to find another business to take over the space were unavailing. (The Sokolows did not respond to calls for comment on this article.) And thus Noah’s Ark sank along with the Stage, Adelman’s (in Brooklyn) and the other delis that have closed in New York — and across the country — in the last year.

While it has been said that the co-op board owes it to the neighborhood to find another kosher restaurant to take the place of Noah’s Ark, could a new kosher place survive?

Jeffrey Gurock, a professor at Yeshiva University and the leading expert on the history of Orthodox Jews in America, doubts it.

“The Orthodox Jewish clientele used to go down to the Lower East Side for the sights, sounds and smells of the old neighborhood,” he said. “Now they can have it right in their own backyard — wherever they live in New York.”