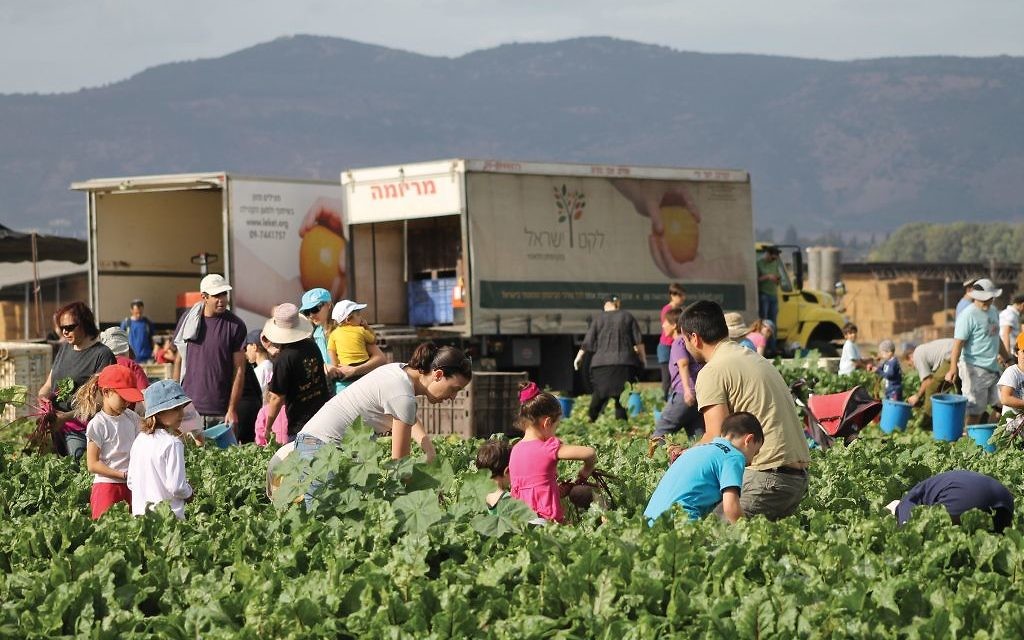 A Washington Heights native who trained here as a lawyer, and made aliyah in 2000, Joseph Gitler attended a family friend’s bris ceremony while back in the New York area last week. At the end of the simcha, Gitler thought to himself, what’s going to happen with all the food?

On the tables Gitler saw lox and bagels and fruit and pastries, a “typical” spread. Some of it would probably be thrown away, he feared.

Gitler needn’t have feared, had the bris taken place in Israel — there, in 2003 he had launched a national organization that collects leftover food and brings it to organizations that feed the needy.

A graduate of Yeshiva University and Fordham University Law School, Gitler worked as director of sales and marketing for a family software business in the first few years after moving to Israel.

Then two things happened: a new study indicated that one third of Israeli children live below the poverty line; and the second intifada of Arab violence against Jews kept tourists away, weakening the national economy and reducing investments in high-tech ventures.

Gitler said he noticed the situation at his family’s home in Ra’anana. “Many, many more people were knocking on our door,” asking for a handout.

Curious about the extent of the need, he took time off from his job to embark on a three-month-long self-education project, traveling around the country, meeting the leaders of places where food is made, and where food is consumed. Everywhere he went, he learned that food was going to waste, that there was no coordinated national effort to save such food and bring it to the people who needed it, and that the responsible people were willing to donate the food.

A large network of Israeli organizations feed people in the traditional way, by buying the needed supplies. But the food rescue movement, characterized in New York City by City Harvest, a 33-year-old initiative that annually collects 55 million pounds of excess food items from restaurants, grocers, bakeries, manufacturers and farms, had reached Israel only on a piecemeal basis. “This piece was missing,” Gitler said.

He went to Canada to study the operations of Second Harvest, a national food bank. He saw how a food rescue effort was done on a national level, and decided to duplicate this in Israel, raising a little money from his circle of friends and making pickups and deliveries with his own car.

The result was the Leket Israel Food Bank, an independent organization that Gitler called “the largest initiative of its sort in the world. It’s a feel-good story from Israel.”

The unofficial motto of Leket Israel (it merged in 2010 with the Table to Table organization) is “No schnitzel left behind.”

Leket is one of the biblically commanded types of gleanings, the agricultural produce a farms leaves for the poor.

“I think that at a very basic level, it’s a very Jewish value to be appalled by food waste,” said Gitler, 40, who was here last week to raise money and awareness. Most of the organization’s annual $10 million budget comes from the eight trips he makes to the United States each year.

While the Israeli economy is booming, many Israelis are struggling, he said. “The situation is far worse than when Israel was a poor country with socialist values.” Since the capitalist-oriented Likud party first came to power in 1977, Israel has increasingly veered towards a market economy, leaving “a lot of people” with limited incomes behind, he said. For many Israelis, Israel is “a First World country with Second World wages.”

He described a growing economic gap between the people plugged into Israel’s start-up nation ethos, and the less fortunate. Such expenses as food and housing have risen steadily over the last few decades, while many peoples’ salaries have not, Gitler said.

Leket Israel has grown from a one-man operation to the country’s largest food rescue organization, with 11 refrigerated trucks, ten other vehicles, a tractor, 100 employees; most of it 60,000 volunteers work in the fields, literally collecting the gleanings. Other volunteers pick up and collect the donated items, prepare sandwiches for schools, and deliver seminars on nutrition.

Last year the organization “rescued and distributed over 25 million lbs. of produce and perishable goods,” according to its website (leket.org).

Tourists often pitch in during their free time in Israel, Gitler said, and 20 Arab women are paid to assist in the picking.

The recent violence in Israel has not slowed down the organization’s work, he said.

About 140,000 people, including Druze, Bedouins and Christians, benefit each week from Leket Israel’s largesse, Gitler said. “This is an Israeli organization. We work with all sectors of Israeli society. We’re specifically a coexistence organization. We’re not specifically an environmental organization.” (Though Leket helps the environment by reducing the amount of garbage and rotting food in fields.)

What would happen without Leket Israel?

A lot of food would be wasted, Gitler said. “No one would be starving,” but, “people would be skipping meals. People would be getting less-nutritious meals. They might go to bed hungry.”

While also working now for an unspecified family business, his main responsibilities as chairman of Leket Israel are marketing and fundraising.

His five children know not to waste food, Gitler said. At home, “I’m a maniac” about this. His family helps in the collection and distribution of food not eaten at their meals. “Everyone is part of it.”