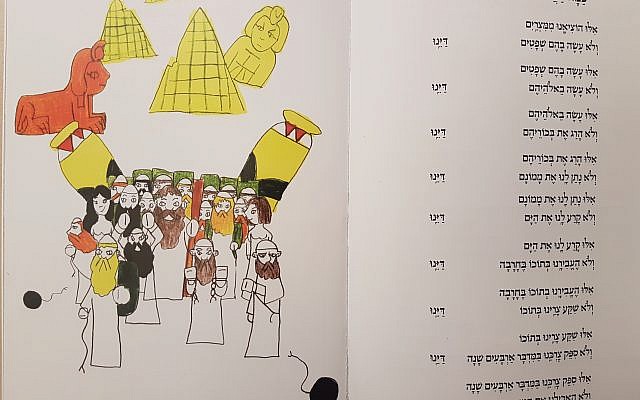 Art from the “No Limits” Haggadah. Courtesy of Fran Kritz

Last week in Israel thousands of Seder goers used one of the most beautifully illustrated Haggadahs ever produced. Titled “No Limits,” the Haggadah was conceived of and published by Koren, the powerhouse Israeli publishing house known for prayer books with forewords by Rabbi Jonathan Sacks and other required reading (and praying) for the Jewish book shelf. Koren’s marketing manager, Chaya Friedman came up with the idea and reached out to Shekel, a leading organization in Israel that provides vocational training and many other services for people with disabilities. The “No Limits” Haggadah was designed by Shekel’s in house “Between the Lines” graphic design studio which employs individuals with disabilities who create branding and graphic design for businesses and consumers throughout the country.

“We wanted to create a Haggadah that inspires the person reading it and allows them to see the freedom it contains,” said Friedman, adding that Koren has wanted to “do something of social benefit” and “when the idea of Shekel’s graphic studio came up, we knew straight away this was what we wanted to do.”

The Haggadah has illustrations that kept even weary Seder guests engaged. Many of the page bottoms feature charming tiny drawings of Egyptians, Israelis and some of the Chad Gadya crew-a packed cast from the last song of the Seder. The outstretched hands illustrating the Seder song “Adir Hu” (He is mighty) are so poignant and all the work showcases such bright color befitting the “holiday of spring” as Passover is also known. Flip through the pages and you can only admire the breathtaking work of three very creative artists. “We chose the name “No Limits” says Friedman, “because the Haggadah was created by people who chose not to let disability define who they are and who they choose to be.” 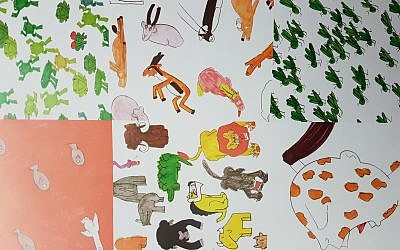 Art from the “No Limits” Haggadah. Courtesy of Fran Kritz

The design studio heads chose three artists for the project and they in turn produced exquisite illustrations. Sahar, who has Downs Syndrome, is known for his stunning color techniques; Raphael, is on the autism spectrum and his drawings highlight the Haggadah. And Yafit who, uses technological aids to overcome the physical limitations of MS, added her trade mark motifs of the Land of Israel. During a snack break in his work day just a few days before Passover, Sahar blushes when he is asked about the Haggadah and says he enjoyed the work and seeing the finished product. Asked which Haggadah he will use for the Seder and Sahar is quite sure— “mine, of course,” he says in Hebrew. His friends, surrounding him at the break table, cheer.

For 2019, the Haggadah was published in Hebrew only and sold in Israel online and in Shekel’s gift shop in the Talpiot section of Jerusalem. Thousands have been purchased or retrieved as an insert in the Israeli newspaper Mekor Rishon. Next year Koren will also produce an English translation using the same beautiful artwork.

Shekel has inhouse workshops and used some of the illustrations as designs on hand towels, matzah covers, and coasters sold online and in the gift shop. Just a few days before Passover a father brings his daughter in to the Shekel shop just to buy the Haggadah for the Seder. “I heard about it and knew I wanted to bring it to our table” said the father.

The hope by everyone involved is that the No Limits Haggadah will make the Seder night different and special for everyone who holds the beautiful book in their hands. “In designing this Haggadah, we showcased the illustrations of Sahar, Yafit and Raphael, all three of whom are talented illustrators. We were extremely happy for the opportunity to publicize their talents and show their potential to all those who have an appreciation of art,” said Yael Tanami, the manager of Shekel’s graphic design studio.

The publishers end the introduction to the Haggadah with a brief sentence that explains why “No Limits” is so right for Seder Night. “Freedom,” they say, “is within each one of us.”

Fran Kritz is a freelance writer based in Washington, DC who wrote a regular health column for the New York Jewish Week for a decade. Currently she is writing about healthcare topics for the Washington Post, NPR and Kaiser Health News.