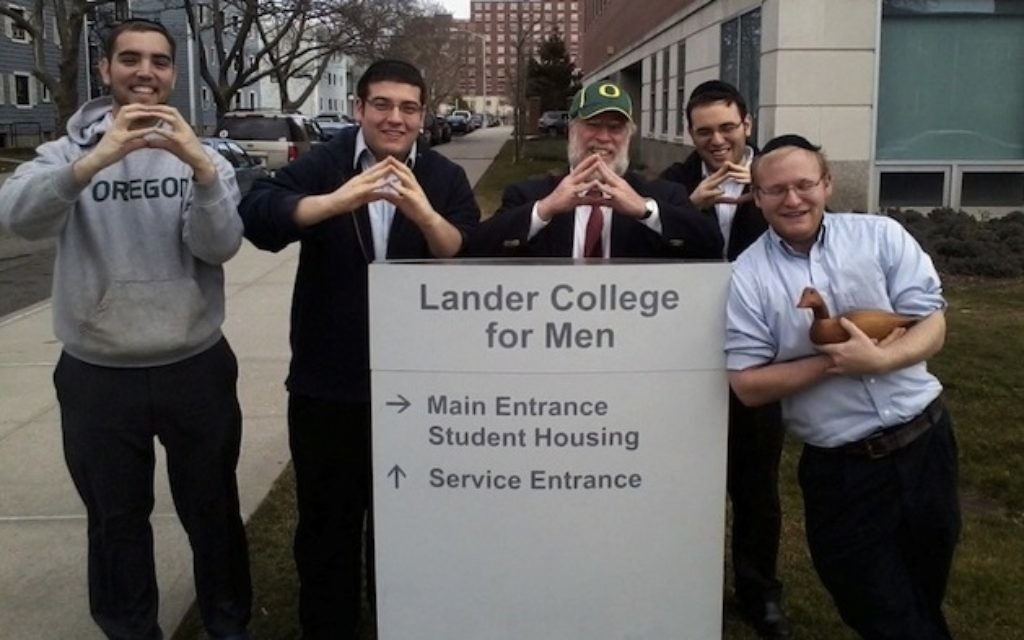 College football kicks off this week, and the 2012 season schedule and pre-season clips about the No. 4-ranked University of Oregon Ducks have already started appearing on campus.

On the Lander College for Men campus in Kew Gardens Hills, Queens.

The 300-student Orthodox school in the heart of an Orthodox neighborhood has no football team, no teams of its own beyond intramural flag football, but Lander College has become a bastion of UO-fandom, 2,500 miles east of Eugene, Ore.

Duck-central is the office of Herb Ratner, Lander College assistant dean (in charge of academic counseling and faculty recruiting) and a University of Oregon 1980 graduate (master’s in industrial and labor relations).

Ratner, who has served at Lander College, a branch of Touro College, since 2006, “adopted” the Ducks as Lander’s team since he started the job. Rooting for the Ducks is a recreational diversion for the students who maintain a grueling schedule of Judaic and secular studies, he says. He posts the team’s schedule (defeats are recorded as a “NW,” non-win) and other updates on the door of his office, whose walls bear a UO pennant and whose window shelf is home to a wooden duck.

“Not every guy in the building is an Oregon fan,” he told Yahoo Sports, “but I can guarantee you right now that there are more Orthodox Jewish guys who have been fans of Oregon football than at any time in the program’s history.”

The Ducks are a natural choice for an Orthodox institution, he says. First, Head Coach Chip Kelly runs a “class” program, with none of the various scandals that plague other big-time football college teams. Second, the relative underdog factor; while a rising power, UO is less known, in the East at least, than perennially successful teams like Ohio State or Notre Dame; how many people, Ratner asks rhetorically, have met an Orthodox Jew or someone from Oregon?

And a duck is kosher.

What if Ratner, a Brooklyn native and Far Rockaway resident, had attended some school like the University of Arkansas, whose symbol is the — definitely treif — Razorbacks (wild boar)?

Ratner’s devotion teaches thankfulness to one’s alma mater, he says. “I have a tremendous amount of gratitude to the University of Oregon and what it means to me in my professional life.

“It’s something that the guys will always remember,” after they leave Lander College, he says.

On the seven-acre Queens campus, “everyone knows about it,” says Moshe, a recent graduate, who while not a Duck convert does follow the team’s fortune.

The UO team’s unofficial affiliation with a far-away Orthodox institution “is pretty unusual,” Craig Pintens, UO spokesman, says in an e-mail interview. “We were flattered that Dean Ratner had adopted us, but not surprised as he is a great Duck.

“We want to be ‘the’ national brand in college athletics and certainly having the following in the nation’s largest city will help us achieve that goal,” Pintens says.

It doesn’t hurt that the Ducks have ranked among the top NCCA Division 1-A football teams in recent years, 44-9 since 2008.

Their season kicks off at home on Sept. 1 against Arkansas State, and ends Nov. 24 against archrival Oregon State.

For top teams in the NCAA’s Pacific-12 athletic conference, success may mean a spot in the national championship game or in the New Year’s Day Rose Bowl Game against the winner of the Midwest Big Ten conference. Ratner isn’t greedy. “The Rose Bowl is enough.”