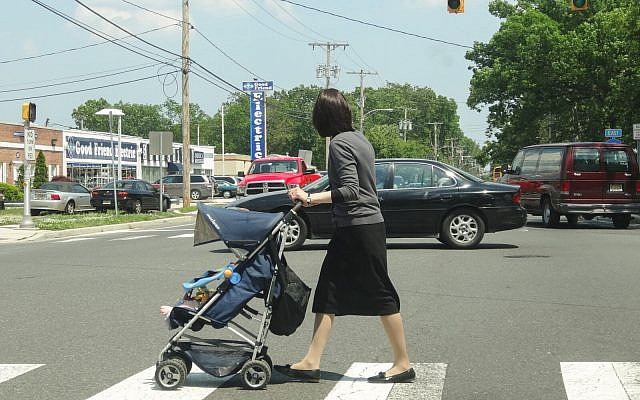 An Orthodox woman pushes a stroller in Lakewood, N.J., in 2013. The population in the largely haredi Orthodox town has boomed in the past couple of decades, and haredi families are looking to move to neighboring towns. (Dennis Fraevich/Flickr) Via JTA

(JTA) — The video, with suspenseful music playing in the background, opens with footage of a crowd of Orthodox Jews. Then it paraphrases a classic poem about the Holocaust.

The script is a riff on the Martin Niemoller work lamenting the perils of inaction in the face of Nazi atrocities.

But the video, which was posted this month, isn’t meant to denounce Nazis. Instead its purported villains are Orthodox Jews looking to move to the Central New Jersey suburbs.

“The process by which Lakewood was lost was a simple one and has been seen in other parts of the Northeast over the last few years,” the description below the video says, referring to a nearby city with a large haredi Orthodox community and rapid population growth. “Offer generous amounts of money to acquire existing homes through pressure sales, build new homes at the expense of the environment, elect a majority to governing bodies and sieze [sic] control.”

The group behind the video is Rise Up Ocean County, which aims to galvanize residents of Central Jersey to stop haredi Orthodox families from buying real estate in the towns surrounding Lakewood. It says it is producing a documentary and mobilizes locals to attend town meetings. Rise Up Ocean County, whose leaders are anonymous, wrote in an October statement that it does not want the quiet, comfortable suburbs to go the way of Lakewood.

Lakewood, which is known as a center of haredi Orthodox life in the United States, has seen its population boom in recent decades, from around 60,000 in 2000 to more than 100,000 as of 2017. Local officials have predicted that by 2030, the number would more than double, according to the Asbury Park Press.

As the city has grown, Orthodox families seeking more space have moved to neighboring towns like Toms River or Jackson.

The expansion has created a backlash from some non-Orthodox neighbors, who often say their objections are about zoning, housing density and local support for public schools. But the Orthodox residents and others see some of the criticism as anti-Semitic.

A similar dynamic is being seen by towns near Monsey, a largely haredi Orthodox town in New York state near its border with New Jersey. Those towns repeatedly attempted to stop the construction of an eruv, a symbolic ritual boundary that residents said would invite more Orthodox Jews to move in.

Rise Up Ocean County insists its objections are only about “quality of life,” not religion.

“We also acknowledge that corruption of our political system has allowed development in Lakewood at an unprecedented rate and frankly in an unsafe manner,” the group’s statement said. “What has occurred is tragic, we exist to insure that what has happened there cannot happen elsewhere in Ocean County. We already see signs in the northern part of Toms River, southern part of Howell, eastern part of Jackson and western part of Brick … and beyond. IT MUST STOP!”

Local Jewish leaders in and around Lakewood acknowledge that the population spike has posed challenges, like clogged streets and scarce parking. In addition, the local school district runs large deficits because it receives funding only for the 6,000 kids who attend public school, but must provide buses for the additional 30,000 who attend private schools.

“It’s a vicious group that’s trying very hard to put a genteel veneer on their deeply anti-Semitic agenda,” said Rabbi Moshe Zev Weisberg, a spokesman for the Lakewood Vaad, a local Jewish communal organization. “Using the most vile anti-Semitic methods reminds us of a very dark period of Jewish history.”

In anonymous emails, Rise Up Ocean County agreed to answer written questions from JTA but later reneged, pointing to statements written on its Facebook page.

On that page, the group repeatedly denies that it is anti-Semitic (“We are NOT anti-Semitic,” the October statement reads). And in a post written following the video paraphrasing the Holocaust poem, the group wrote that “We certainly did not intend to draw a moral equivalency between the holocaust and current events in Ocean County. What took place under Nazi rule will forever be known as the greatest human tragedy in the history of mankind …” The video, however, is still up.

Instead, the organization claims that it is concerned about what happens when any one ethnic group exercises too much power.

“Whenever a particular group, whether they are orthodox Jewish, Christian, Muslim, Hindu, Atheist, black, hispanic, or white exercises complete control over any one element of government it is a danger,” the group wrote in a post Wednesday. “Human nature is for that group to advance their own agenda, often times at the expense of the populace.”

Weisberg and others have said that the way the group singles out haredi Jews and generalizes about them is hateful. Another video, posted to Rise Up Ocean County’s YouTube channel, shows a photo of an unidentified group of Orthodox Jewish men with the subtitle “It’s not about religion.” The video then shows an extended shot of unidentified Orthodox children before warning that population trends could destroy the area’s “quality of life.”

“That growth will not be in the black or Hispanic communities, it will be almost exclusively in the Orthodox Jewish community,” the narrator says, later adding that “Lakewood will be at the epicenter of the continued wonderful quality of life that we currently enjoy in Ocean County, or it will lead to its utter destruction.”

Comments on the group’s Facebook page are cruder. On one post showing a photo of a local Orthodox real estate agent, one commenter wrote, “They already own so much property over there! I don’t understand where the money comes from if more than half are on welfare?!!! (I do understand, believe me).” Another wrote “build the wall around Lakewood,” which garnered 11 “likes.” A third wrote “Unbelievable. These animals.”

Drew Staffenberg, the executive director of the local Jewish federation, said that communal leaders have been in touch with law enforcement regarding the group. The Rise Up Ocean County group has more than 4,000 likes, and Staffenberg says it represents a fringe of the local population, which is generally open and accepting.

“I think his rhetoric spews hate,” Staffenberg said, referring to the anonymous administrator of the Facebook group. “It’s anti-Semitic. I don’t think there’s a question about that. The law enforcement are monitoring this. It’s really one guy and a few other people trying to stir up trouble.”

The real estate agent criticized in the Facebook group, Abba Deutsch, said the Facebook page does not reflect his day-to-day interactions with residents of Toms River, where he lives and works. He said he never hears anti-Semitic comments while soliciting properties and has good relations with his neighbors regardless of religion.

Deutsch said that he, like other haredi residents of the city, was drawn by its quiet streets and relatively spacious homes, compared to Lakewood.

“The majority of the people in Toms River are very welcoming and very nice,” he said. “It’s just a couple of clowns who go on Facebook and make noise.”

Deutsch said that most people moving to Toms River don’t want to live in Brooklyn, in high-density housing or in Lakewood.

“They want nice, proper houses,” he said. “They want to live the American dream like the rest of Americans.”