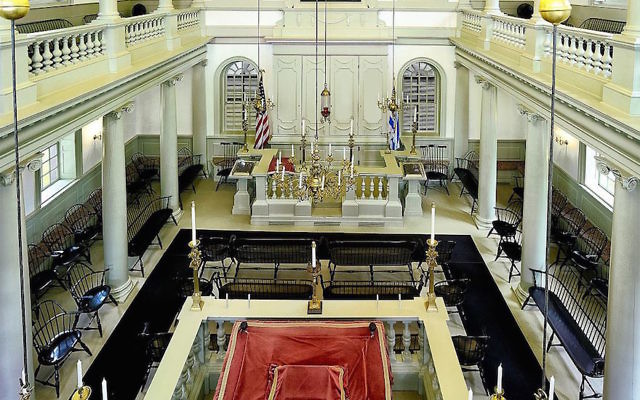 A view inside the Touro Synagogue in Newport, Rhode Island. (Wikimedia Commons)

The congregation that worships in America’s oldest synagogue building will ask for a rehearing of the case that gave control of its pricey artifacts to the building’s historic trustees.

The U.S. Court of Appeals for the First Circuit in Boston last week ruled in favor of Manhattan’s Shearith Israel, the oldest Jewish congregation in the country, giving it control of the 250-year-old Touro Synagogue in Newport, Rhode Island, the religious home of Congregation Jeshuat Israel.

The decision also gave the Manhattan synagogue ownership of $7.4 million silver Torah ornaments called rimonim that the congregation in Newport had hoped to sell to build an endowment.

Retired U.S. Supreme Court Justice David Souter, who occasionally sits in on cases in the First Circuit and wrote last week’s decision, this week gave the Newport congregation an extension until Sept. 5 to file a rehearing petition at the congregation’s request, the Associated Press reported.

The case concerns “the continued vitality of the congregation that has prayed in that synagogue for well over a hundred years,” read the Jeshuat Israel filing, according to the AP.

“We think the petition to be filed by CJI wholly lacks merit,” Shearith Israel said in a statement shared with JTA. “Shearith Israel believes any more protraction of this meritless litigation would be unfortunate.  With the Court of Appeals being as clear as words can be, now is the time for the parties to be moving back to the harmonious cooperation that characterized their relationship for over 100 years.”

The historic Touro Synagogue was founded in the 18th century by a Sephardic Jewish community whose numbers declined over the years. Shearith Israel, a Sephardic congregation that was established in 1654 and has worshipped at various sites in Manhattan, has served as trustee of the Touro Synagogue since the early 19th century. Jeshuat Israel,  founded in 1881 as Ashkenazi immigrants began flooding America from Eastern Europe, has worshipped at Touro for more than a century.

The current dispute began in 2012, when Jeshuat, which still holds regular services at Touro, attempted to sell the silver ornaments to establish an endowment to maintain a rabbi and care for the building, which was designated a national historic site in 1946. Shearith Israel sued to stop the sale and threatened to replace Jeshuat with another tenant who “would respect the rule of law and Shearith Israel’s rights,” an attorney for Shearith told JTA in an email.

The rimonim have been on loan from the Touro Synagogue to the Museum of Fine Arts in Boston, which had made an offer to purchase them. The museum has since rescinded its offer.