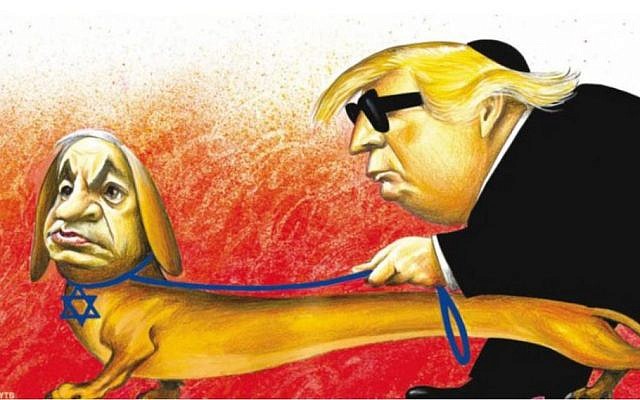 NEW YORK (JTA) — After widespread condemnation, and an initial statement that critics slammed as inadequate, The New York Times apologized for publishing an “anti-Semitic political cartoon.”

The image, which appeared Thursday in the opinion section of the international print edition of the newspaper, depicted Israeli Prime Minister Benjamin Netanyahu as a dachshund-breed guide dog wearing a Star of David collar and leading a yarmulke-clad President Donald Trump.

After an initial wave of outrage, the Times’ opinion department issued a statement on Saturday acknowledging that the image was “offensive” and “included anti-Semitic tropes.” The statement blamed the publication of the cartoon on an “error in judgment,” but stopped short of apologizing.

Critics slammed the first statement as inadequate on several fronts.

In its second statement, issued Sunday, the opinion department said it was “deeply sorry” and said the decision to publish the image was the product of “a faulty process” resulting in “a single editor working without adequate oversight.”

“The matter remains under review, and we are evaluating our internal processes and training,” the second statement continued. “We anticipate significant changes.”

“Such imagery is always dangerous, and at a time when anti-Semitism is on the rise worldwide, it is all the more unacceptable,” the second statement read.

The apology came a day after one person was killed and three were injured in a shooting at a synagogue in Poway, San Diego, putting a national discussion of anti-Semitism near the top of the news cycle.

The cartoon was widely criticized, including by Vice President Mike Pence, Israeli politicians and pundits, and multiple Jewish organizations.

Dan Shapiro, former U.S. ambassador to Israel for the Obama administration, called the Times’ second statement “appropriate and placed in the correct context.”

Better. The full apology is appropriate and placed in the correct context. More details of the explanation are still warranted, as is a full accounting of the changes they say are coming. (Obviously, it should never have happened in the first place.) https://t.co/VLyZzAx24X

David Harris, the CEO of the American Jewish Committee, called the second statement “a far better, and more forthright, statement than the ‘non-apology apology’ The New York Times first issued.”

“While it should have come quicker, clearly the newspaper heard the public outcry, took it seriously enough to think it through, and acknowledged the painfully obvious — the cartoon is virulently antisemitic and should never have seen the light of day in any of the paper’s editions,” Harris wrote to the Jewish Telegraphic Agency in an email. “Only time will tell, however, whether these welcome words will translate into serious, sustained guidelines.”

The cartoon was attributed to a Portuguese cartoonist, António Moreira Antunes, who works under the mononym Antonio, and has worked for the weekly newspaper Expresso for several decades, according to The Jerusalem Post. The cartoon was originally published in Expresso.

Antonio has drawn previous Israel-related cartoons that drew condemnation, including one in 1983 that, according to a JTA report, showed Israeli soldiers pointing guns at Lebanese women and children in a depiction set up like the iconic photo of Nazis tormenting Jews in the Warsaw Ghetto.