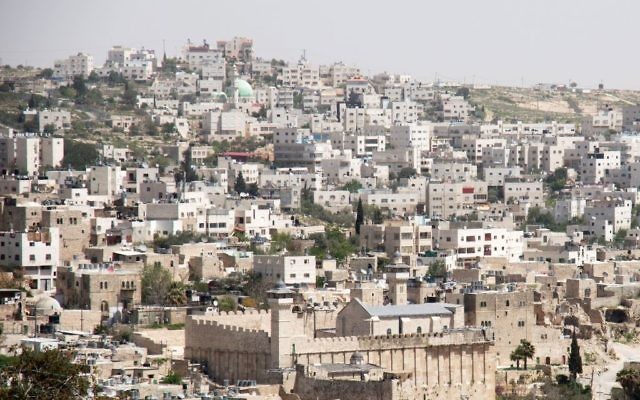 Hebron now sits alongside a beautiful American national park on UNESCO’s list of world heritage sites that need protection. But the Everglades National Park is on the “danger” list of the UN’s cultural arm because of concerns about its ecosystem. Hebron is on the “danger” list because of politics — the kind of politics that has the ability to easily incite to violence.

Following last Friday’s vote, UNESCO now considers Hebron’s old town not only a site in danger, but a Palestinian heritage site. Historical Jewish connections to a city of religious and cultural importance were again — after two UNESCO resolutions last year that airbrushed Jewish connections to Jerusalem — being edited away.

The latest resolution was carried by a vote of 12-to-3, with 6 abstentions. The UNESCO vote came a few days after a resolution that echoed the world body’s past rejection of Israeli sovereignty over Jerusalem.

Israel’s Prime Minister Benjamin Netanyahu decried the “delusional resolution” on Hebron at Sunday’s cabinet meeting, and responded by cutting $1 million from Israel’s funding to UNESCO. He will hand the money to a Jewish history museum that is being built in Hebron. U.S. Ambassador to the UN Nikki Haley called the UNESCO decision “an affront to history.”

This was a victory in the Palestinian battle of narratives over the identity of key sites, as Palestinian Tourism Minister Rula Ma’ayah was quick to point out. She called the Hebron vote an “historic event” and said that it “emphasizes the identity of Hebron and the Ibrahimi Mosque, that it belongs to its heritage and history of the Palestinian people.” The Ibrahimi Mosque is the Muslim shrine next to the Cave of the Patriarchs, which is revered by Jews.

Netanyahu went into narrative-battle mode in responding to the resolution, reading from the Bible to underscore the long-running attachment of Jews to Hebron. Some government colleagues are urging him to go a step further and hold the forthcoming cabinet meeting on Sunday at the Cave of the Patriarchs.

While much has been said about the claiming of Hebron as Palestinian, there’s another part of this that should be activating a warning light in our heads — the “in danger” part. The thrust of this is that Israel, or to borrow the language used at UNESCO, the “Occupying Power,” is responsible for this danger.

It’s worth connecting the dots between Hebron and another key city in the Israeli-Palestinian conflict, and recalling that this very phrase, used in relation to Jerusalem’s Al-Aqsa Mosque, has fueled much of the violence perpetrated by Palestinians against Israelis in the wave of violence that erupted in October 2015.

The notion that the Al-Aqsa Mosque is “in danger” at Israel’s hands — sometimes a vague claim with unspecified dangers looming, often a claim that Israel is putting it at risk of collapse — is the subject of social media posts, imams’ sermons and rallies. And it elicits a cost in blood.

The two other sites listed as Palestinian on UNESCO’s “in danger” list don’t have the religious and cultural significance in the Palestinian mainstream that Hebron elicits. They are two West Bank sites: the landscape of Battir is one and the Church of the Nativity and the Pilgrimage Route in Bethlehem is the other.

As the scene of many terror incidents, Hebron has a central role in Palestinian violence. Now, with the “danger” to this city signed and sealed by UNESCO, Palestinians wanting to ferment anger and incite have a new ready-made campaign. The opportunity to galvanize support based on the notion that Hebron is in danger — a supposed fact that can now be referenced on the documents of UNESCO — is too good for them to pass on.

As the resolution is uniting Palestinians over the issue of Hebron, it is also pushing Hebron, normally a fringe topic for most Israelis and diaspora Jews, to center stage.

The dovish Tzipi Livni of Israel’s Zionist Union party, was heard ahead of the resolution talking about Hebron, a topic she rarely addresses. “I am an opposition leader in Israel, but I am not in opposition to the history of my people and not in opposition to the truth,” she said. One of her party’s strongest anti-settlement voices, Merav Michaeli, was quoted as calling the resolution “insane.” And in the other main opposition faction, Yesh Atid Party head Yair Lapid said he thought the resolution was “contemptible.” Diaspora groups such as the World Jewish Congress have expressed their fury at what they deem an attempt to rewrite Hebron’s history.

Jewish people who would normally steer clear of talking about the divided city, where 1,000 settlers live, heavily guarded, surrounded by more than 150,000 Palestinians, feel that they can’t let this resolution go unchallenged. Many reject the ways of the settlers for maintaining Jewish presence in Hebron today, but can’t bear the feeling that a political fight is being fought by undermining the historic connection of Jews to this city.

Hebron is widely seen as a stronghold of the Israeli hard-right. Most Israelis are unlikely to visit there or take much interest in the city, and the same is true of Jewish people from the diaspora. In fact, settlers have long been frustrated that an out-of-sight, out-of-mind dynamic exists and Hebron, despite its historical importance, and that it hardly figures in the identities of most Jews. Ironically, UNESCO may have unwittingly upped Hebron’s significance, ever so slightly, in contemporary Jewish identity.