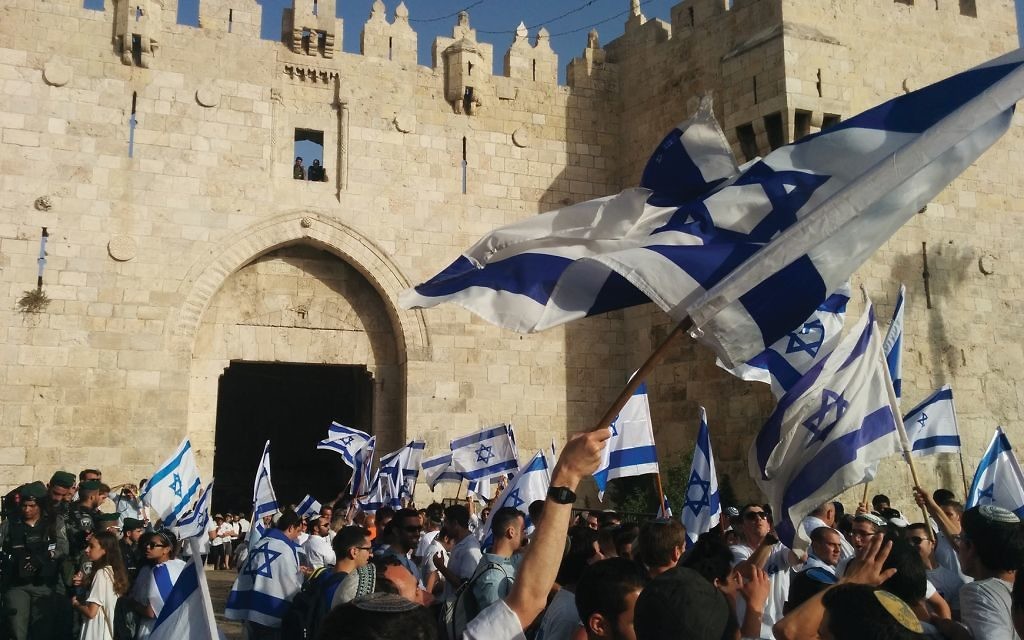 Jerusalem Day festivities outside the Damascus Gate. “Jerusalem is ours — all parts of it,” said a Knesset member. Joshua Mitnick/JW

Jerusalem — It was barely 4 p.m. on Sunday when Rami Sambusek started stacking up plastic chairs outside the Basti Pizza Restaurant in the heart of the Old City’s Muslim Quarter as the final customers lingered.

Preparations for the controversial Jerusalem Day flag march were in full swing just a few feet away opposite the Palestinian restaurant: A pack of police special forces in riot gear and armed with tear gas canisters huddled with commanders, while small groups of yeshiva students excitedly broke out in songs of praise to Jerusalem.

As Arabic-speaking police chatted with shop owners, Sambusek explained why he was closing up early. Soon, thousands of Israeli celebrants would be streaming through Rechov HaGuy, the main street linking the Western Wall Plaza to the Damascus Gate, and the police had ordered the shopkeepers to shutter their shops to prevent “friction” with the marchers.

“[The police] said the reason you should close is because we are afraid that something will happen to you from the Jewish side,” said Sambusek. “It doesn’t feel good that we must close early.”

Minutes later, surrounded by the first marchers in the shadow of the Old City walls and the majestic arch of the Damascus Gate, Knesset member Motti Yogev gave a benediction invoking the miracles of the exodus from Egypt, and the giving of the Torah at Mount Sinai — and the Israeli unification of Jerusalem in 1967.

As the cries of “Am Yisrael Hai” rose from the circles of parade participants, Yogev, a member of the pro-settler Jewish Home Party, told reporters about how the Six-Day War was the most “wondrous” of Israeli battles because it returned Jerusalem to the “people for whom it was promised … Jerusalem is ours — all parts of it.”

With that, thousands of young national religious marchers began surging through the gate, waving flags, dancing ecstatically and singing of rebuilding the ancient Jewish temple.

Just hours before, the Israeli Supreme Court rejected a petition from an Israeli human rights group to re-route the parade to avoid the Muslim Quarter. Ir Amim, the human rights group, focuses on Jerusalem and argued that the parade has in previous years resulted in violence and racial incitement against the Muslim residents of the Old City. The group noted that this year the parade fell a day before the start of Ramadan, heightening the potential for a flare-up.

The dispute over the parade illustrates the deepening fissure in Israel over the legacy of the Six-Day War and its most controversial territorial spoils — east Jerusalem and the rest of the West Bank.

“The great failure of Jerusalem reunification day is that it hasn’t reunified the Jewish people,” said Yossi Klein Halevi, an Israeli-American author of the book “Like Dreamers: The Story of the Israeli Paratroopers Who Reunited Jerusalem and Divided a Nation.”

“There is no holiday on the Jewish calendar that more deeply reflects our schisms than Jerusalem Day,” Halevi continued. “That’s painful for me personally, because I feel deep gratitude on Jerusalem Day, but I also understand why large parts of the Israeli public have been alienated by the strident nationalist expressions of parts of the religious Zionist camp, which has taken over the celebrations for Jerusalem Day.”

Daniel Seidmann, an Israeli-American lawyer and a Jerusalem peace activist, said the significance of the victory has “mutated” over decades from being an authentic war of self-defense to a “pseudo-biblical messianic” event in the eyes of some Israelis. The parade is “celebrating what the 30,000 residents of the Muslim Quarter consider a disaster. No day symbolizes the occupation of east Jerusalem as much as this day, and no event symbolizes this day as much as this parade.”

Assad Asmar, a 72-year-old souvenir shop owner, complained the parade festivities started one day early, with Israeli nationalists singing and chanting into the night. Neighbors and residents stay in their houses for fear of violent encounters and give candy to frightened kids, he said.

On the edge of the parade route, activists passed out pamphlets to recruit new residents for unauthorized settlement outposts; business cards called on Israelis to use “Hebrew labor”; and stickers called for Jews to “liberate” the Temple Mount.

Shlomo Emek Shushan, who came from the settlement of Beit El with his family, explained the significance to him of Jerusalem Day and the flag march to the Western Wall: “Once a year, we get to go home,” he said.

“If I come here on another day, they will spit on us. They will humiliate my wife,” he said. “They hate us — that’s the culture of the Arabs.”

Wearing an Israeli flag as a cape, Shmuel Davis, a 19-year-old gap year yeshiva student, said, “This is our territory. We should be able to go wherever we want.”

Another reason for the tension this year: For about six months, the Damascus Gate and the street to the Western Wall plaza had been a flashpoint for stabbing attacks against religious Jews and Israeli security forces. One of the first deadly stabbings of the unrest occurred outside a Jewish-owned house along the parade route.

At a kiosk just inside the archway, Wael Najib packed away dozens of mobile phone covers into boxes, in preparation for the parade. Najib’s location has given him a front row seat to six stabbing incidents on the plaza outside. The drop in tourism over the months of the knifing wave, he said, has nearly wiped out his business. Now he was closing early again.

“The tax authorities don’t believe me,” he said. “What can I say. We just want to live quietly. Those who live here just want to put food on the table for their family. It’s expensive here.”

Forcing the shopkeepers to close early is simply part of the special preparations for mass events, said Yogev, the Knesset member. The police want to prevent “friction” between the marchers and the residents, he added.

“Tomorrow will begin Ramadan, and we will wish them Ramadan kareem [the traditional holiday greeting],” Yogev continued. “Our aspiration is to live together. If they want to live together, they’re most welcome. They want to leave? They can go. They want to fight? We will be stronger.” He vowed to continue to build up Jerusalem. “We have 49 years behind us, we have an eternity in front of us.”

The marchers streamed into the Muslim Quarter, waving flags, jumping, and singing “The Temple will be built,” a common line from the Jewish liturgy that takes on a much more aggressive connotation during the flag day.

Across a small line of police and barricades sat a small group of Palestinians watching the proceedings. Little children flashed “V” while an older youth just stared, a look of anger etched into his eyes.

“We are very mad about this day. We see what they do, and the words that they shout at us. They are saying Jerusalem is just for us, and you don’t have a place here,” said Mahmoud Dabbash, a 39-year-old Muslim Quarter resident.

Observers at the parade said the event was relatively less raucous this year. By 7 p.m., police had closed off the parade route to marchers. And while the parade went off relatively smoothly, it certainly didn’t seem to advance a united Jerusalem.

Explained Dabbash, “My kids ask me what is this, and I don’t know what to tell them. I tell them: those are the ones that stole our land.”