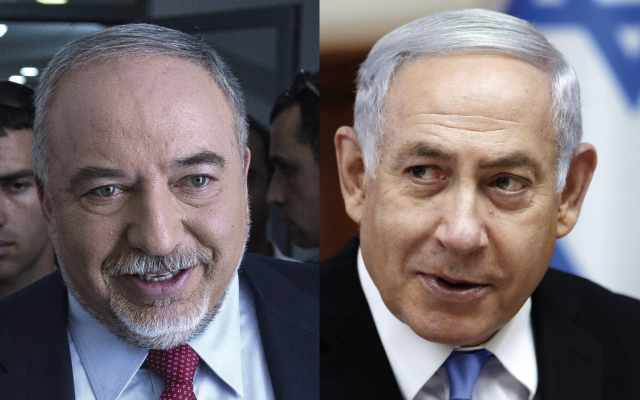 Former Defense Minister Avigdor Lieberman, left, a longtime rival of Prime Minister Benjamin Netanyahu, is forcing a split on the Israeli right between secularists and the ultra-Orthodox. Getty Images

Members of Israel’s victorious right wing voted to negate their electoral victory from April and hold a new election, while legislators from the defeated center-left bloc voted to preserve the parliament and avoid a new vote. And deputies from the Arab parties joined with the prime minister’s allies to aid in his gambit to stay in power.

Israel is headed for its second parliamentary election in less than two months — an unprecedented development in the country’s history and a seeming sign of political dysfunction.

Rather than allow the presidential mandate to form a government pass to another parliament member, Netanyahu decided to gamble on calling a snap election.

Indeed, early polls suggested that, once again, a coalition of right-wing and religious parties would control a majority of the Israeli parliament.

Stephan Miller, an Israeli-American pollster, said that the broad dynamics that prevailed among voters in the last election haven’t changed.

“There wasn’t one poll published ahead of the April election that showed Netanyahu not forming a coalition of right-wing parties,” he said. “There’s no indication of any changes to the electorate that would suggest a different situation by mid-September.”

However, even though the prime minister still holds the advantage, no two Israeli elections are the same, said Avraham Diskin, a political science professor at Hebrew University.

“No man ever steps in the same river twice,” said Diskin, sounding a Buddhist note. “Things are going to change. Everything is open.”

Indeed, Israel’s longstanding debate over religion and state is already emerging as a wedge issue in the upcoming vote. Avigdor Lieberman, who torpedoed Netanyahu’s coalition in protest over draft exemptions for the ultra-Orthodox, has seen his polling numbers surge to nearly 10 seats from the five he received in the election.

Already this week, Lieberman has gone on the offensive against members of Netanyahu’s coalition. After Israel’s Kan television news reported that Netanyahu discussed with ultra-Orthodox groups allowing separation between women and men at public government events, the former defense minister took to social media.

“Today we got more proof that the Likud, under the direction of Benjamin Netanyahu, surrendered to all of the coalition demands of the ultra-Orthodox in the coalition negotiations,” he wrote on Twitter. “Yisrael Beiteinu won’t allow that to happen and will fight with all of its power to prevent it,” referring to the party he leads.

Lieberman also railed against a pledge of Knesset member Betzalel Smotrich of the Union of Right Wing Parties, who aspires to become Israeli justice minister, to “restore the Torah justice system” and for Israel to “go back to conducting itself the way it did in the days of King David.”

Writing on Facebook, Lieberman said, “This is exactly what we are trying to prevent: turning the Jewish state into a halachic state.”

It’s something of a shift for Lieberman, who a decade ago made an infamous reputation running an ultra-nationalist campaign against Israeli Arabs with the slogan, “no loyalty, no citizenship.”

“With his sharp political instincts, Lieberman understood that incitement against leftists and Arabs has run its course,” wrote Ravit Hecht in Haaretz. “And Lieberman, in his political wisdom, has found an old-new target that’s somewhat fresher — the Orthodox and ultra-Orthodox.”

Ravit Hecht argued that the centrist Blue and White party will need to match Lieberman’s rhetoric if it wants to win.

“This will have to be the main thrust of its campaign: Frightening members of the public about the fate that awaits them in the clerical right-wing state being planned by the alliance of the ultra-Orthodox and Orthodox who tend towards ultra-Orthodoxy.”

Indeed, it appears that Blue and White and other opposition parties don’t plan on leaving Lieberman as the sole defender of the secular state. On Monday, Yair Lapid responded to Smotrich’s pledge for a religious state, tweeting “we won’t let this pass,” while Labor MKs said his statements “are a warning sign for the wave of conservatism by parts of the right.”

Lieberman may have revived an issue with the potential to upend and realign Israel’s political map in the upcoming election, said Dahlia Scheindlin, an Israeli-American public opinion expert. In addition to secular immigrants from the former Soviet Union, traditional Israelis from Netanyahu’s coalition would like to see less influence of religious regulation in Israel’s public life, she said.

“Religion and state is one of the only issues that is a clear divider between left, right and center, other than peace and security,” she said. “It’s not a coincidence that the more religious people are, the more right wing they are — with the caveat that religion and state separation is the one issue that connects with a constituency that is both right wing and secular.”

The collapse of Netanyahu’s coalition efforts shows that his alliance of right-wing and religious voters is far from a homogenous bloc, said Yohanan Plessner, the president of the Israel Democracy Institute.

“What we’re seeing is that there is a strong, significant group of secular Israelis who self-identify themselves as right wing. They want a right-wing government, but they do not want a government that allows the ultra-Orthodox to call the shots in the entire realm of a religion and state and the domestic agenda.”

Perhaps, recognizing the potential of the religion-and-state issue, Netanyahu on Monday also pushed back in his tweets against the idea of a religious state.

In recent years, Netanyahu has referred to Israel’s religious Zionist parties and ultra-Orthodox parties like Shas and United Torah Judaism as his “natural” partners in a coalition. After coalition negotiations foundered, Netanyahu denounced Lieberman as a member of the Israeli “left.”

While Netanyahu is expected to return to his winning strategy of running against forces of the Israeli “left” and Arab parties, analysts say they sense that Israel’s second-longest serving prime minister has been weakened politically by the corruption charges hanging over his head. Israeli prosecutors are set to subject him to a hearing in early October and could announce a final indictment before a government is formed after the September election. That vulnerability undercuts his ability to form a coalition after the April election.

“A lot of Netanyahu’s success is based on this aura of invincibility he has, and that he alone is the indispensable prime minister, and that no one else can fill his shoes,” said Michael Koplow, the director of the left leaning Israel Policy Forum. “This is the first time in the last decade that he has really failed in a big way. I suspect that this will impact some of his voters.

“I definitely think he’s wounded. Every time he runs, I wouldn’t bet against him to win. But,” Koplow concluded, “this is the first time that I have some creeping doubts.”