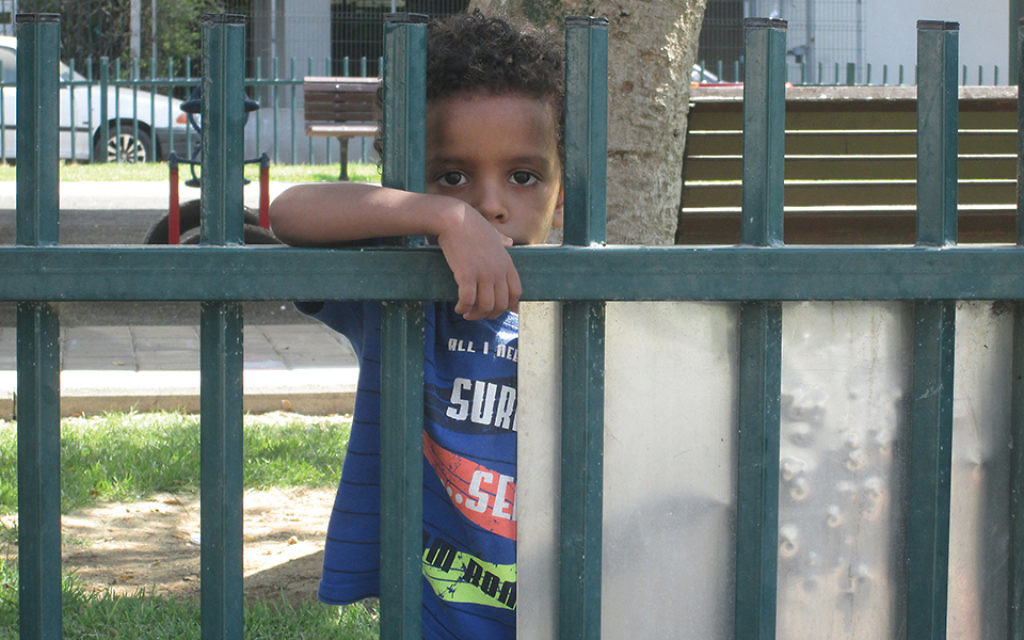 Tel Aviv — A baby whimpers in a crib and another cries on a mattress on the floor. A toddler nearby spits up his food, but Felicia Fori Koranteng, who runs Gan Felicia, a south Tel Aviv preschool, can’t attend to them because there are dozens of other infants and toddlers in need of her attention.

The two-room preschool, which serves up to 80 children of Israel’s 45,000 to 50,000 African asylum seekers, isn’t funded or regulated by any government agency because the children have no legal status in Israel, even if they were born here. In most cases their births haven’t been documented, and neither they nor their parents — some of them in Israel for more than a decade — receive the universal health coverage Israel provides to its citizens.

The babies and toddlers at Gan Felicia, a place that provides warmth if not attention, are crowded together in one room, the older kids in the other. There are almost no toys in the preschool, and no room to play, so the TV on the wall acts as a babysitter. A small gate keeps the children inside the rooms for their own safety. Their parents work from morning till night, often as house cleaners or food preparers in other cities, so the vast majority of the children are stuck inside the entire day, every day.

Today, though, 14 volunteers, most of them parents and students from the American School, have come to take some of the children out for an hour-and-a-half of fresh air at a nearby park. They’ve brought with them healthy snacks and the desire to give the 14 children they’re accompanying seems to be 14 volunteers and 14 children an abundance of hugs and personalized attention — something the preschool’s three or four full-time caregivers cannot provide.

“We’re about as grassroots as they come,” said Dianne Wier, a volunteer from Texas whose husband, a Lockheed employee, is stationed in Israel for a few years. “Their gan is heartbreaking,” she said, using the Hebrew word for preschool. “The children just crave attention. Here in the park they can run around, something they can’t do at the gan.”

The weekly visit by the American School volunteers is just one of the dozens of grassroots initiatives that have sprung up in Israel to assist the country’s asylum seekers. The projects range from legal aid and health clinics to adult education programs, community meals and women’s cooperatives.

The plight of Israel’s asylum seekers has been making headlines since the refugee/migrant crisis in Europe erupted this summer and Israelis began to debate whether they should provide shelter to some Syrian refugees.

Advocates for Israel’s asylum seekers insist that before Israel can consider taking in additional refugees, it needs to deal humanely with the ones already here.

“These asylum seekers are good, very honest people,” says Gideon Ben-Ami, who, with the help of the New Jersey-based Good People Fund, the Leket food bank, supermarkets and restaurants provides more than 100 tons of rescued food to 12 preschools for asylum seeker children as well as eight families who have been subjected to hate crimes or other traumas.

“For years Israel had an open border with the Sinai and allowed the refugees to come,” Ben Ami said. “They’re already here and we need to take care of them.”

Human rights groups say the Israeli government is making the lives of the asylum seekers, the vast majority of whom cannot be deported according to the United Nations High Commissioner for Refugees, unnecessarily difficult.

Israel “is a reluctant host to 46,437 African asylum seekers predominantly from Eritrea (73 percent) and Sudan (19 percent) and a small minority (8 percent) arriving from several other African countries,” according to the Tel Aviv-based African Refugee Development Center, which relies on volunteers to carry out its services.

The advocacy group says the asylum seekers “are denied basic rights and access to social services, and the government of Israel has employed various policies to pressure asylum seekers to leave.” These policies include indefinite arbitrary detention, refusal to accept and review asylum claims, limitation of access to basic state-sponsored services, incitement and coerced repatriation, according to ARDC.

ARDC notes that Israel’s High Court has twice affirmed that the state’s treatment of African asylum seekers “is unacceptable and violates fundamental laws concerning human dignity and liberty.” The court, it notes, “insisted on a comprehensive policy that seriously tackles this issue, but the government remains non-compliant.”

In response, an Israeli government official said, “the government has explained on numerous occasions its position regarding illegal migrants and will continue to take the necessary steps to address this issue.” Prime Minister Benjamin Netanyahu has framed the issue as one that “is very grave and threatens the social fabric of society, our national security and our national identity” as a “Jewish and democratic state.”

Some groups have successfully petitioned the High Court to release more than 1,000 detainees at the Holot detention camp, a dismal place that houses Eritrean and Sudanese asylum seekers.

Other groups, like Faces of Exile (facesofexile.com), urge Israelis to sign petitions, lobby Knesset members, and volunteer with one of the organizations offering legal guidance, health services, and services to children.

The Hagar and Miriam Program counsels and supports pregnant women during and after their pregnancies. Volunteers include gynecologists, nurses, midwives, doulas, childbirth educators, lactation consultants as well as participants in Jewish Agency programs.

Last week, the Hartman Institute kicked off a fundraising campaign to establish a day care and learning center for children of African refugees aged 3 to 6. The center, which will be launched in collaboration with the Elifelet organization, which cares for 600 children and infants, will be open from 1:30 to 6:30 p.m. daily. Delivering food and a little spending money to an Eritrean family whose toddler died of malnutrition in Tel Aviv, Ben Ami bemoaned the lack of government services for asylum seekers.

“Four or five asylum seeker children have died from malnutrition. This shouldn’t be happening in a country that is fairly well-off. It says 36 times in the Torah that you should care for the stranger in your midst. How can we so easily forget that we were once the strangers?”

Seated in her one-room apartment, where a curtain separated the family’s beds from two sofas and a kitchenette, Hule Semere, the mother whose 10-month-old son died of malnutrition, said things in Israel are tough but even tougher in Eritrea.

“Here we don’t have health insurance so I couldn’t take the baby to the hospital,” she said. “But in Eritrea the government imprisoned my husband for six years. We can’t go back there until there is a change in government. At least here we can hope for a better future.”

“For You Were Once Strangers,” a documentary on the plight of Israel’s African asylum seekers, will be screened at the Chelsea Film Festival on Friday, Oct. 16 at 6 p.m. at the SVA Theater (333 W. 23rd St.). The screening will be followed by a Q&A session with the director Ruth Berdah-Canet. Chelseafilm.org.