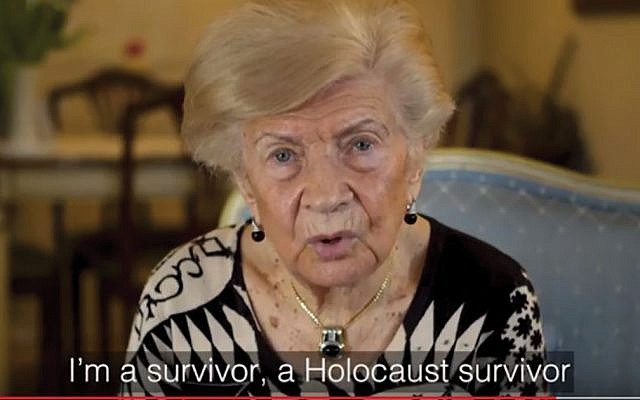 Holocaust survivor Lea Evron, in a WJRO video, says, “I will not give up” trying to get her family’s property returned. WJRO

The two video clips run no more than a minute each and succinctly tell what happened to the property of two Holocaust survivors and their families. Simply put, it was taken by the Nazis and has never been returned, despite entreaties to the current governments of Poland and Slovakia.

With a mournful cello swelling in the background, one of the survivors, Lea Evron, 85, of Whitestone, Queens, describes her father’s fur factory and nearby three-story apartment building in Zywiec, Poland, as well as the family’s exile and her lifelong quest for the return of the factory and the building.

“Since 1988, when Poland became a democratic country, I have been trying to recover my father’s factory and building,” she says. “Although I have received numerous promises from Polish presidents, until today these properties have not been returned. I will not give up.”

In the second video, against the backdrop of violins, 92-year-old Greta Mares of Forest Hills, Queens, describes living in Topolcany, Slovakia, when in 1942 the Nazis came and took “everything of value,” including their jewelry, cars and furs.

Their videos, posted on the website of the World Jewish Restitution Organization (https://wjro.org.il/mypropertystory/), are part of #MyPropertyStory, launched on the eve of Yom HaShoah, Holocaust Remembrance Day (May 2), and designed to raise awareness about the need to address restitution of Jewish private and communal property seized during the Holocaust. 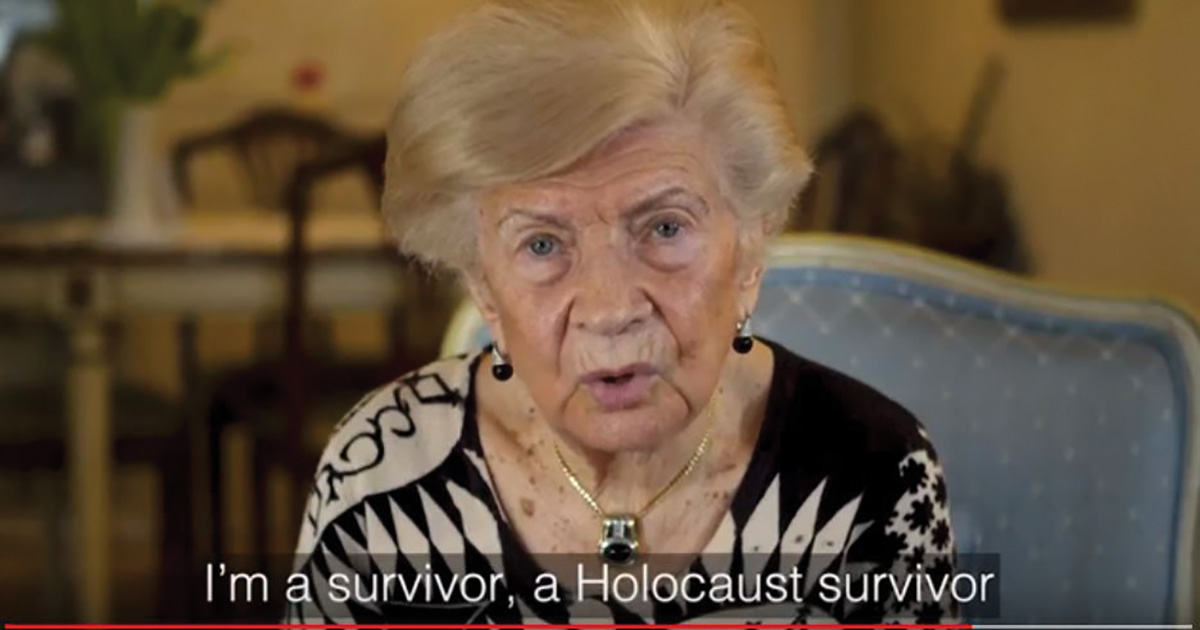 Holocaust survivor Lea Evron, in a WJRO video, says, “I will not give up” trying to get her family’s property returned. WJRO 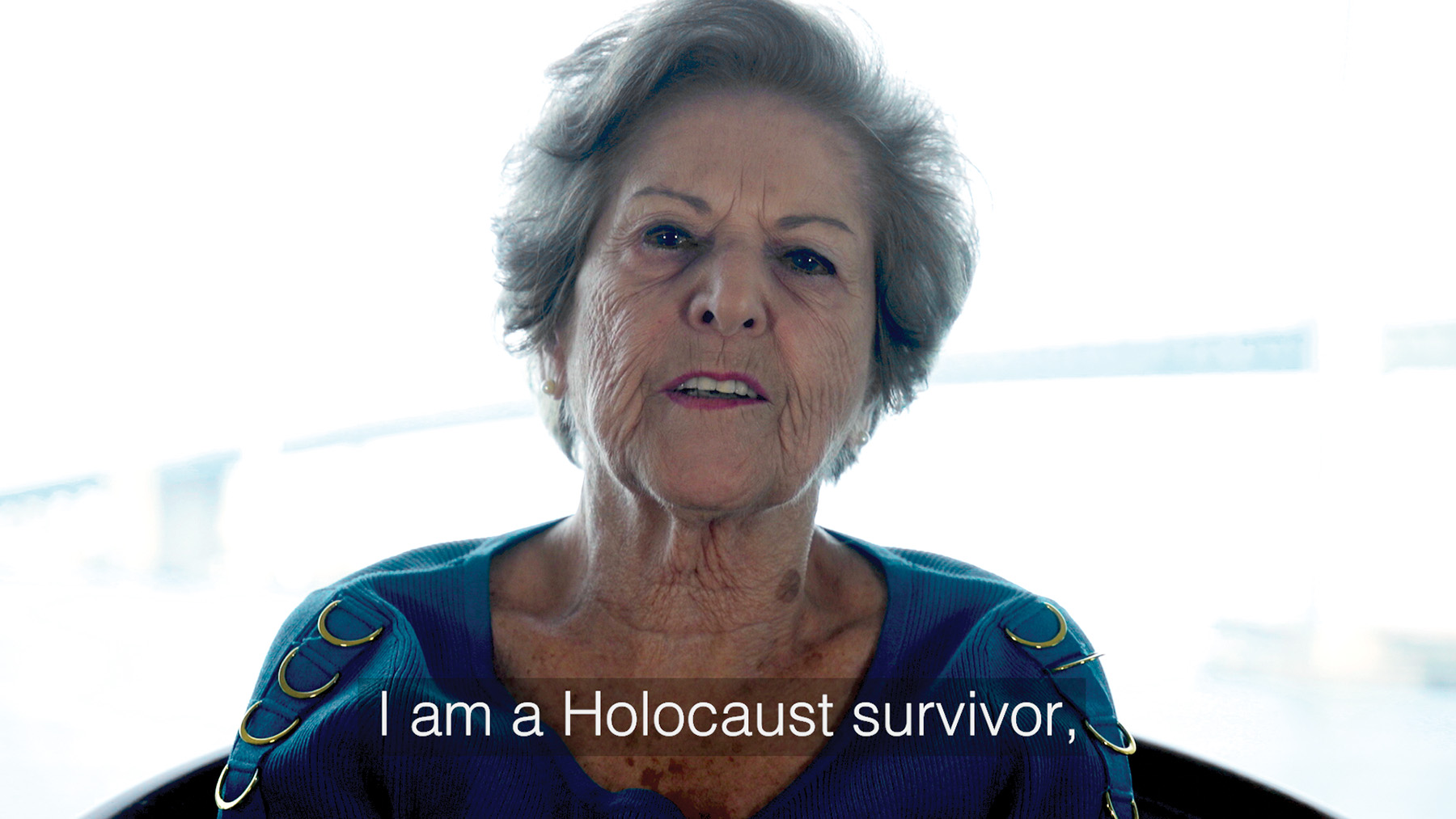 Gideon Taylor, the WJRO’s chair of operations, said in a statement that “tens of thousands of people are participating in the … campaign from around the world. Survivors, their families, and others are using the power of social media to share stories of lives that were forever changed by the Holocaust to shed a light on the injustice suffered by millions as a result of what was wrongfully taken from them during the Shoah and its aftermath and help ensure a small amount of justice for the future.”

Poland is the only country in the European Union that has not enacted national property restitution legislation. At the end of 2017, the Polish legislature drafted a bill that would provide for compensation payments for people who lost property in the Holocaust, but it pointedly excluded non-citizens and those who were not residents at the time their property was confiscated. The WJRO urged the government to delete those exclusions and the legislation was held up. Taylor of the WJRO said his organization is again pressing the Polish legislature to revise the legislation and adopt it.

“We hope that the Polish government understands that compensation needs to be addressed,” he told The Jewish Week. “We hope they will recognize that and take action.”

Providing encouragement to the campaign were the February remarks of Secretary of State Mike Pompeo. During his visit to Warsaw, at a joint press conference with Poland’s minister of foreign affairs, Jacek Czaputowicz, he said that the U.S. appreciates “the importance of resolving outstanding issues of the past, and I urge my Polish colleagues to move forward with comprehensive private property restitution legislation for those who lost property during the Holocaust era.”

Czaputowicz did not address the issue and reporters did not raise it during the question-and-answer period. Email queries to the Polish Embassy in Washington were not answered.

In the video and in a later interview, Evron said that she and her mother were the only members of her family to survive the Holocaust. She said they survived by hiding in the homes of many non-Jewish Polish families.

“After the war, my mother said we are going home, and we took a train and got off at a station that was close to our buildings,” she recalled. “As we walked to them, a woman passed in front of us, stopped and said, ‘Look at this. Hitler promised to get rid of all the Jews and now they are coming back.’ That was our welcome home.”

Evron said that since the war she has hired lawyers in Poland to pursue her claims for the recovery of the buildings. She pointed out that one of the first things her mother did after the war was to hire a lawyer to transfer the apartment building and the family’s fur factory to her ownership. Her father, who had owned the buildings, had been killed in Auschwitz.

Evron’s husband, Jehudah, who is also president of the Holocaust Restitution Committee, a New York-based group of Polish survivors, said one of their lawyers actually won his wife’s case in court.

“Our lawyer had sent the court ruling to Poland’s Finance Ministry and was told we can’t get back the property because it has been sold and the new owner bought it in good faith,” he said. “Our lawyer is still corresponding with them, but in his last email he said there was no chance, that it’s a dead case. And that is what has happened to many of our members’ [claims].

“The sad story is that the survivors survived the Holocaust and now have to suffer another persecution by the Polish government,” he added. “There are other survivors who don’t need the money but who say they want to give the buildings to their children; but Poland ignores them. Some have their own financial problems and instead of finishing their life in dignity, are finishing it in poverty because they cannot get back their property.”

He added that he and his wife don’t need their property — the factory has been converted to a shopping center and offices now occupy the site of the apartment building — but would like to donate whatever compensation money they get to Israel. The property has been appraised at nearly $1 million.

Reacting to Lea Evron’s video on Twitter, Dorota Podlesna wrote: “My Polish family lost many properties. When they came back from Siberia, they found two other families sharing their flat, as Poland was completely ruined. My ancestors let them stay ‘till the city got rebuilt.”

But there was also pushback. Janina wrote: “I find it particularly heinous & lousy to include the kind of statement, ‘Hitler promised them to kill all the Jews’ in a one-minute video not specifying who Lea Evron heard it from (a German, Ukrainian, Pole, other) & use it in the context of restitution claims addressed to Poland.” And Agnieszka wrote: “She wants money from Poland, not Germany. Why?”

But a member of the European Parliament from Hungary, Peter Niedermuller, wrote: “We cannot give back Holocaust survivors what they lost, but we can ensure that they see a measure of justice and help them secure what is rightfully theirs.”

Hilda Chusid, the daughter of Greta Mares, who said the Nazis took everything from her family in Topolcany, Slovakia, said her mother believes there is no longer any point in pursuing restitution efforts.

“It’s in the past,” she said in an interview. “It happened a long time ago. She thinks it’s a lost cause.”

But when asked to ask her mother if she would like to be compensated for the value of a vacant lot the Nazis seized from her family, Mares got on the phone and said, “Yes.” She then revealed that in the last few years she had been in touch with someone “who tried to get it for me. But he was told I needed to get a death certificate for those [family members who owned the lot] who were killed in Auschwitz. My father and brothers and my sister were all killed. I needed proof that I am the heir. Where am I going to get a death certificate?”

Chusid said only her mother and two older brothers — there were nine siblings in all — survived three different labor camps.