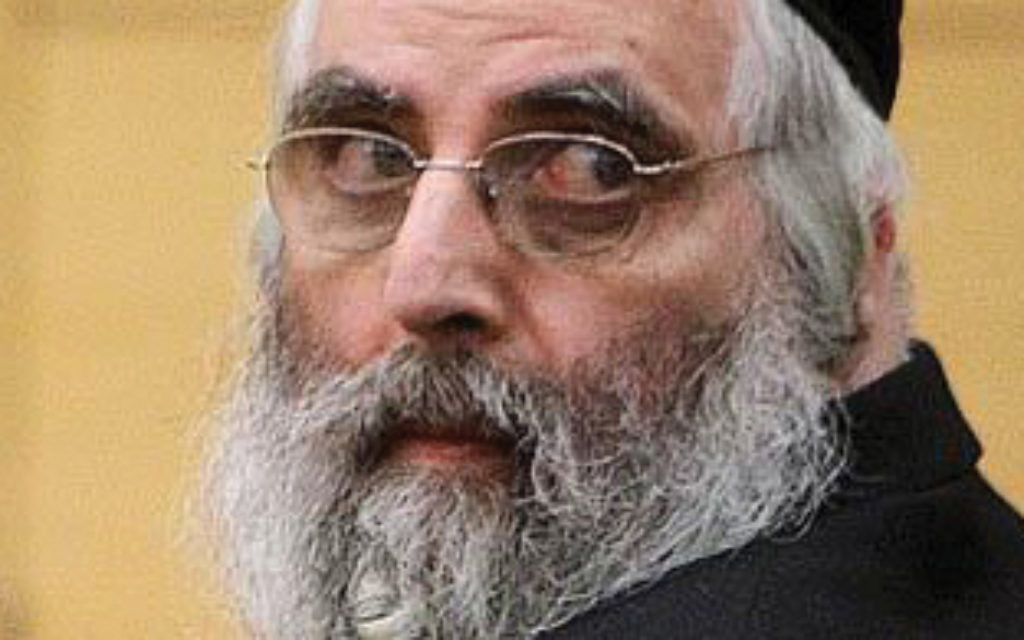 A “notorious” alleged chasidic sex abuser who was sentenced to up to 32 years in jail but got that verdict overturned because of a prosecution violation all but admitted on tape to sexually abusing the young man who testified against him, The Jewish Week has learned.

The tape, according to police documents, was made under the supervision of NYPD Det. Steve Litwin in September 2008 and captures a secretly recorded conversation between Baruch Lebovits and one of his alleged victims. The tape was translated from the Yiddish — both apparently informally and by a certified translator — into English for the prosecution.

It was not, however, introduced at Lebovits’ 2010 trial. (Brooklyn District Attorney Charles Hynes has pledged to retry Lebovits and his next court date is scheduled for Nov. 19.)

Multiple e-mails to Hynes’ spokespeople seeking an explanation for why the tape was not used at trial, and whether it will be used in the upcoming retrial, were not answered.

During the recorded conversation, a transcript of which was obtained by The Jewish Week, the victim alerts Lebovits to the fact that others, including someone in Assemblyman Dov Hikind’s office, had heard that something “happened between us.” (In 2008, Hikind did a series of radio shows on the topic of sexual abuse in the Orthodox community and was inundated with calls from victims seeking his help; Hikind has confirmed to The Jewish Week that the young man on the recording did share his allegations against Lebovits with his office.)

On the tape, the alleged victim asks Lebovits, “You didn’t tell anyone what went on between us?” to which Lebovits replies, “I didn’t say anything.” The alleged victim then goes on to speculate about who may have given this information to Hikind’s office, suggesting it could have been another boy “who was then in the car together with us” and “saw the incident.” (Police records show that Lebovits allegedly often molested boys in the front seat of his car, at times with another boy present in the back seat).

According to the informal translation, written in Litwin’s hand, Lebovits replies that the other boy “wasn’t present,” to which the alleged victim responds, “You don’t remember. Yes he was present.” At that point, Lebovits instructs the alleged victim to “go ask [the boy] if he gave out [the alleged victim’s] name.” (These comments do not appear in the certified translation, which was done by a non-native chasidic Yiddish speaker and in which a number of lines of dialogue are described as “unintelligible.”)

Later in the conversation, after the alleged victim tells Lebovits that the case may be “given over to the police,” Lebovits tells the young man to “deny it.”

When asked about the recorded conversation, Lebovits’ appellate lawyer, Nathan Dershowitz, confirmed for The Jewish Week that the DA did disclose to the defense a transcript of a September 2008 conversation, which Dershowitz characterized as “innocuous.” From Dershowitz’s response, it is unclear whether the defense made its own translation of the tape, or even received an actual copy of the tape from prosecutors. (Arthur Aidala, Lebovits’ trial attorney, did not respond to an e-mail from The Jewish Week seeking information about the recording).

According to former Manhattan prosecutor and defense attorney Mark Bederow, “There may be reasons why the DA would not introduce the recording [at trial],” but that does not explain why the DA [apparently] did not disclose the recording to the defense.”

“A recording made of the defendant at the behest of the police must be disclosed to the defense irrespective of whether the DA intends to introduce it at trial,” Bederow continued. “I have never heard of a situation in which defense counsel, aware of his client being recorded at the behest of police, simply relied on a transcript prepared by the DA rather than demanding production of the actual recording.”

Bederow added: “As transcribed [by the prosecution’s translators], the recording appears to have significant evidentiary value to the prosecution. Innocent men generally don’t speak in the manner attributed to Lebovits in the recording, and a jury hearing a defendant voluntarily incriminate himself in his own voice in a non-coercive atmosphere is powerful evidence.”

Indeed, the district attorney’s case against Baruch Lebovits has been plagued with problems throughout its five-and-a-half year history. And questions about the office’s handling of it have emerged amid controversy about Hynes’ diligence in prosecuting haredi sex offenders and those who would intimidate and tamper with victims.

Initially, prosecutors had three within-the-statute-of-limitations witnesses against Lebovits, all of whom had sought and obtained rabbinic backing to report their abuse to the police. One of those witnesses abruptly dropped out of the case before trial, and there is substantial evidence to indicate that he was intimidated into doing so by Lebovits’ supporters. (Despite this, prosecutors never sought to bring witness-tampering charges against the individuals involved in the intimidation).

At Lebovits’ widely followed trial — which featured the testimony of the witness on the tape — it emerged that prosecutors had failed to turn over in a timely manner, and as required by law, a complete set of notes containing the complaining witness’ statements to the police, or what is known as Rosario material. The defense made a motion to the trial judge to declare a mistrial, but the court denied it, attempting to remedy the violation by recalling the witness and allowing the defense to cross-examine him about the newly disclosed notes.

In what abuse survivors and their advocates lauded as an unprecedented victory in the fight against child sexual abuse in the haredi community, Lebovits was convicted and sentenced to a stunning 10 to 32 years in prison. (The third case against Lebovits, a misdemeanor, was dropped after Lebovits’ conviction). However, two years later an appellate panel reversed the conviction, ruling that the lower court should have declared a mistrial and that prosecutors’ failure to turn over the notes “substantially prejudiced the defendant.” The panel did determine that the evidence was nonetheless legally sufficient to establish Lebovits’ guilt beyond a reasonable doubt and noted that it was “satisfied that the verdict of guilt was not against the weight of the evidence.”

And along with these setbacks was the arrest in 2011 of Sam Kellner, the father of the third alleged Lebovits victim (the misdemeanor case). Kellner was indicted a year after Lebovits’ conviction and charged with having attempted to use emissaries to extort the Lebovits family and paying the witness who dropped out of the case to fabricate his charges against Lebovits.

In a series of articles over the past year, The Jewish Week has highlighted the numerous weaknesses in the district attorney’s case against Kellner, including credible evidence that Kellner was framed in order to cast doubt on Lebovits’ conviction. (Kellner’s trial, which has been postponed several times by the district attorney in what Kellner’s lawyers have characterized as a strategy to delay the case past Tuesday’s general election for district attorney, is set for Nov. 12.)

Abuse survivor and advocate Chaim Levin, who is acquainted with an alleged Lebovits victim who he claims is too scared to come forward, reacted to the revelation about the tape with dismay.

“We all know that this person is a notorious criminal,” Levin told The Jewish Week, referring to Lebovits.

“[The DA] screwed up the case so badly and instead of trying to fix it, they only made it worse,” Levin added, noting that it has been “over a year that the DA has said he is going to retry Lebovits. And in the meantime, he’s free. It’s just really incredibly sad.”