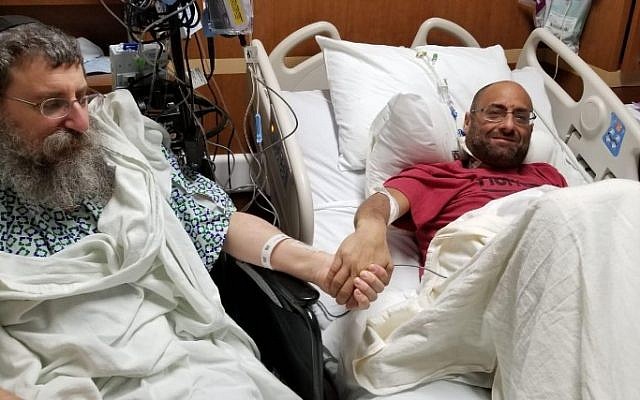 (JTA) — A New Jersey rabbi who a decade ago donated a kidney to a stranger has donated part of his liver to another.

Rabbi Ephraim Simon, a 50-year-old father of nine who co-directs Chabad of Bergen County in Teaneck, traveled to the Cleveland Clinic in mid-December to give part of his liver to Adam Levitz, a 44-year-old father of three from Long Island, New York.

Levitz’s liver was damaged as a result of Crohn’s disease. As of Jan. 1 he remained in Cleveland for observation following the surgery, the Collive community news website reported.

The two men met for the first time shortly before they were taken to surgery in adjoining operating rooms. They both described the meeting as “emotional,” according to the report.

The rabbi had been trying to make a liver donation since 2012. Since he had already donated a kidney, he was considered a high risk candidate for surgery and many hospitals turned down his offer. In addition, gifts of organs to strangers are often viewed suspiciously and therefore rejected.

The surgeons said that Levitz’s liver was in worse shape than they had expected and that he might not have made it much longer.

“As a rabbi, I do a lot of talking about love, doing things for others and altruism,” Simon told Collive. “This was my opportunity to do that and I didn’t want to let it go. Adam allowed me to actually give the gift of life, perhaps the greatest chesed, kindness, I can imagine.”