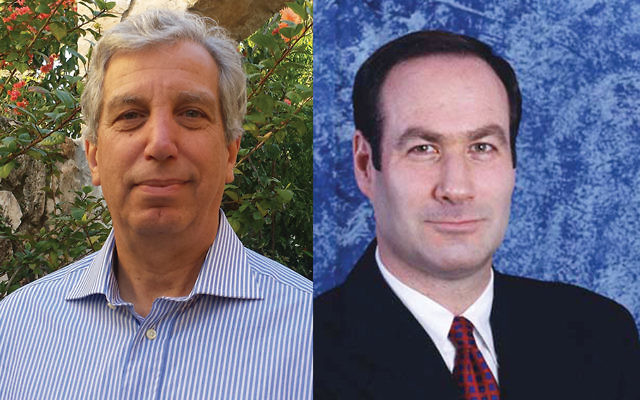 Anyone seeking evidence of the contempt of the American Jewish left for the State of Israel, its society and citizenry, should closely contemplate New Israel Fund’s CEO Daniel Sokatch’s attempt to justify the heinous actions of the NIF’s heavily funded NGO, Breaking the Silence (“The Smear With A Hebrew Accent,” Opinion, April 8).

In the lead-up to his defense, Sokatch offers a depiction of Israel that renders it indistinguishable from contemporary Iran: ultra-nationalist, ultra-Orthodox, marginalizing, repressing. It is a vision that warns of a country on the verge of disaster, a country in dire need of saving by … who else, but the enlightened NIF and its followers of Israeli “human rights organizations,” which it and European governments are happy to keep financially afloat.

This perspective of Sokatch’s is critically important because it provides the justification for ends justifying means, for taking no prisoners, for scorching the earth in the name of somehow saving Israel from itself.

It is hard, indeed it is inescapable, to miss the contempt that Sokatch has for the actual Israel — a healthy vibrant democracy — that has almost completely rejected the worldview and political stance of the NIF.

Breaking the Silence, one of the darlings of the NIF (and recently referred to in the mainstream Israeli press as “probably the most hated organization in Israel”), is a good case in point of a group that has evolved from a sincere watchdog to an organization seen by Israel’s defense minister to be engaging in “treachery.”

When it was founded in 2004, Breaking the Silence (BtS) was seen as a credible outlet for expressing concerns and complaints about perceived errors of commission and even abuses by IDF commanders and higher-ups. To its credit, the IDF has never shunned sincere and grounded criticism, and it took BtS’ findings at face value.

However, the organization is not, as Sokatch would have us believe, a “human rights organization,” but rather, by its own admission, a political one, with an agenda (much like the NIF’s) of forcing Israel to withdraw from Judea and Samaria.

What BtS has become is a group of activists who not only tell what they “saw” and “felt” but do so in their own created courts of public opinion all over the world. Much of what they talk about is perceived war crimes by soldiers or IDF higher-ups.

So when Sokatch disingenuously says that “testimony” from BtS is always cleared by the IDF, he knows very well that very little of what they say is actual testimony, but mostly unverifiable impressions, observations and feelings.

These revelations are made to largely anti-Israel audiences abroad, happy to hear validation of their own hatred for the nation. They are not done to improve IDF practices or protocols.

So scandalous has been the behavior of BtS and its activists that they have spawned the creation of a counter-group, Reserve in the Front, consisting of former soldiers who served alongside BtS activists, and who refute their version of events and practices.

The most recent revelations by the brave activists of NGO Ad Kan (Hebrew for “Enough”) who filmed BtS activists pumping IDF soldiers for information as to military plans and protocols, such as the caliber size of machine guns along the Gaza border, cannot be seen to be anything but gathering classified information that could very well make its way into the hands of Israel’s enemies.

Sokatch misspoke when he said that BtS’ conduct was just a political tempest in a teapot, designed to provide a platform for right-wing condemnation of BtS, and that the investigation of them “was quietly ended.”

First, the Israeli condemnation has been universal, across the political spectrum, and secondly the investigation has not ended. It has merely transferred from the IDF to the Shin Bet, for the simple reason that the IDF has no standing to investigate civilians.

Ad Kan has also called out B’Tselem, another NIF darling, for its efforts in aiding and abetting the work of Ezra Nawi, now under police investigation, for turning Palestinians who would sell land to Jews over to the Palestinian authorities, for torture and/or execution.

Despite its millions of dollars and extensive political clout, Sokatch disingenuously wraps the NIF in the mantle of victimhood. He says that the NIF was falsely accused of providing scurrilous information to the Goldstone Commission for the now-infamous report that Judge Goldstone himself subsequently disavowed. True, it was not the NIF, but it was its funded organizations, such as BtS, B’Tselem and Adalah, that did the deed.

Similarly, the sanctimonious declaration that the NIF does not support the BDS effort does not at all inhibit it from supporting organizations that in fact do support and encourage such efforts.

From Sokatch’s tone, one might think that the NIF is on some emergency Israeli salvation mission. The fact is that the organization was founded in 1979 and has expressed fears of the imminent death of democracy in Israel ever since.

Its worldview concerning Israel — including the return to what Abba Eban called the “Auschwitz borders” of 1949, the cessation of Israel as a Jewish state in favor of a “State of its Citizens” — has been remarkably consistent throughout its history.

What has changed, however, is its willingness to do anything to gets it way; to scorch the Israeli earth, to throw the baby out with the bathwater.

A recent independent survey of Israelis undertaken by Smith Consulting and Research found that 53 percent of Israelis favored severing any ties with the NIF in Israel. This is a severe condemnation, one that the fund has brought on itself.

Whatever regard Sokatch and the NIF have for Israel, it is not for the Israel that actually exists, but for an Israel that lives in their minds as some idealistic vision of a place that they imagine.

The real Israel does not need to be saved. It is alive and well. It only needs to be cherished, something that the NIF has absolutely no interest in doing. n


Jeffrey Wiesenfeld and Douglas Altabef are board members of the Israel Independence Fund. Altabef is also an executive board member of Im Tirtzu, an Israeli NGO that says it supports “Zioinist values.”