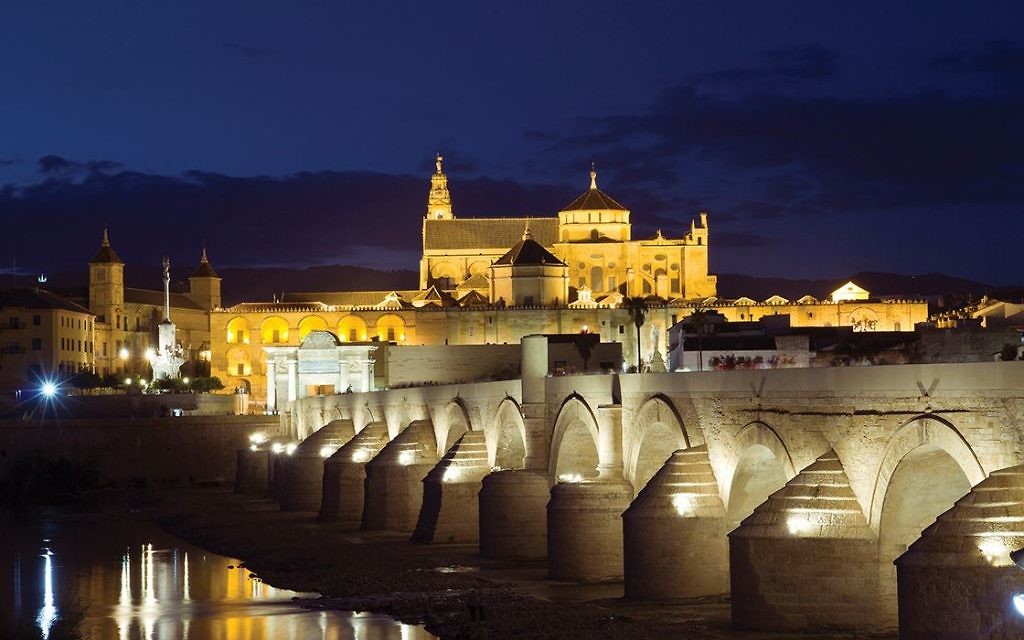 Sumptuous yet arid, culturally rich yet stubbornly poor, Andalusia is at once the most and least Spanish of all of Spain’s regions. Sprawling across Iberia’s southern tier, Andalusia was a stronghold of the Moors and the center of Jewish culture until Ferdinand and Isabella wrested the territory back from the Arabs to consolidate Spain in 1492.

Nowhere is this pre-Spanish legacy more visible than amid the geometric tiled palaces and lavish courtyards of Córdoba, Granada and Seville. Nowadays, Andalusia remains arguably the best place to contemplate the vanished glories of Sephardic culture — a topic of renewed interest this year, given the government’s recent passage of a law granting Spanish citizenship to any Sephardic Jew. Coupled with the ongoing initiatives of the Spanish Red de Juderías, an effort to promote a Jewish tourism itinerary connecting Spanish-Jewish sites both renowned and recovered, this makes 2016 an ideal year to explore what in the days of Maimonides was known as Al-Andalus.

Start on the banks of the Río Guadalquivir in Seville, an intoxicatingly romantic city of porticos, palaces and plazas. Spain’s fourth largest city fairly drips with atmosphere, including three UNESCO World Heritage sites and a legacy that dates to Roman times. As you wander the narrow lanes of the Barrio de Santa Cruz, the medieval Jewish quarter, or stroll across arched bridges by lamplight while flamenco wafts from nearby tavernas, you may understand why Seville inspired so many great artists — from Cervantes, who lived here for a time, to Mozart, Rossini and Bizet, all of whom set operas in the city.

It isn’t hard to see why Don José lost his heart in this town. Romance pervades Seville, from canoodling couples on park benches to brides and grooms, their attendants draped in traditional mantillas, posing for photographs everywhere the tourists go — along the façade of the Gothic cathedral, in the fragrant courtyards of the Alcázar, and in the shadows of the imposing, elegant Plaza de España.

In the decades preceding the Spanish Reconquest, Seville was home to Spain’s second-largest Jewish population and nearly three dozen synagogues; Jews prospered in business, science, medicine, and scholarship. Today there is hardly an alley without some remnant of this brutally vanquished heritage – a past both ubiquitous and frustratingly intangible, existing largely in memory. Jewish life was snuffed out more than half a millennium ago, their Jewish dwellings long repurposed.

A small but well-curated Jewish museum, the Centro de Interpretación de la Judería, offers useful context for a stroll through Seville’s historic core. These chanukkiahs, brightly-colored ceramic platters and silver kiddush cups are all that remain of what was once a vibrant community along Calles Santa María la Blanca and San José; off the Plaza de Santa Cruz are the still-standing columns of an antique synagogue. Like so many Jewish institutions, that sanctuary was converted into a Catholic church (much as Seville’s remaining Jews were converted into Crypto-Jews as requisite for survival). The nearby church of Santa María la Blanca — a pretty edifice with wrought-iron balconies and Moorish arches — was built in the 13th century as a synagogue, and it remains one of the best-preserved vestiges of Jewish presence.

That presence is also evident in Córdoba, a onetime Muslim stronghold up the Guadalquivir from Seville, and today a medium-sized provincial city. Majestic Córdoba boasts one of the best-preserved historic centers in Europe, now a UNESCO World Heritage site; in its narrow, atmospheric lanes are evidence of a thousand-year cultural palimpsest.

It was along these same stone alleys that the revered scholar Yehuda Halevi walked to synagogue in the 11th century, along with his slightly younger contemporary, Maimonides. Both men were physicians, philosophers and scholars whose achievements epitomized the golden age of Jewish Córdoba, when a tolerant, independent Muslim caliphate and cross-cultural intellectual ferment allowed Jews to prosper.

Córdoba’s synagogue dates to 1315 and is among the best-preserved in Iberia; its ivory-hued filigree, graceful Moorish arches and elegant courtyard exemplify architecture of the period. Having served in various capacities over the years, the temple is today a national monument, restored most recently in 1985 for Maimonides’s 850th birthday.

Throughout Córdoba — indeed, throughout Andalusia — the visitor is seduced by the graceful splendor of courtyards, called patios in Spanish, where symmetrical gardens and shaded porticos create an aura of mysticism and romance. One way to absorb the spirit of Córdoba is to make an itinerary of its patios — crossing over the Roman bridge, detouring through palaces and chapels, and observing the overlapping influences of Arabs, Christians and Hebrews.

The grandeur of Córdoba’s vestigial institutions contrasts with the intimate chambers that today house the Casa de Sefarad. A small private museum with a Star of David mosaic floor, the Centro is filled with paintings and artifacts that document the vanquished Jewish presence here. As with other small Jewish museums throughout Spain, items on display are less interesting in themselves than in their collective contribution to a potent sense of place, and commentary from the museum guides is engaging.

From Córdoba, you might continue east to the Sierra Nevada mountains, where the magnificent spires of the fabled Alhambra rise like a mirage against jagged, snowy peaks. Perched on a promontory above Granada’s modern town, the Alhambra is a wonderland of medieval palaces, courtyards, reflective pools, burbling fountains, formal gardens, and filigreed façades of otherworldly beauty.

The palaces of the Alhambra — for which you will want a reservation, even in winter — were built during the glory days of Granada, the 11th through 14th centuries; some sources credit early construction to the influence of a prominent Jewish official in the Moorish sultanate, Samuel Ha-Nagid, a refugee from post-caliphate Córdoba. To explore the Alhambra is to walk through centuries of turbulent history: the fortress walls that later Moorish rulers added to this complex, the convent added by Catholics, the mosque converted to a church, the careful restoration after damage in a Napoleonic military siege.

The Alhambra is without question the centerpiece of touristic Granada, but a stroll through the labyrinthine core takes you to the hillside district Realejo, an erstwhile Jewish quarter. Here in the city of De Falla and García Lorca, the vanished history of Sephardic Granada is easily overshadowed – so a few years ago, a Spanish couple with Jewish ties opened the Sephardic Museum of Granada, housed in a typical dwelling in the heart of the Realejo. Books, artifacts and earnest museum staff aim to bring Granada’s lost Jewish past to life in a region where Jews today are rare.

Many visitors find Granada the most pleasant of Andalusian cities, with its relaxed mix of history and its lively student population from the local university. Young Andalusians embrace tradition with modern takes on granadine flamenco, taking to the bars by night to strum guitars and dance. For many visitors, a highlight of Granada is a stay in one of the many restored paradors and hotels in historic villas, whose medieval ambiance can be as memorable as the official attractions.

This is a region best traversed by car — the better to appreciate a vast, hilly terrain punctuated by sun-bleached villages and crumbling medieval ruins. After so much history, it’s tempting to complicate your cultural orientation with the drive across the southern border to Gibraltar, a rakish outpost of the British Empire that largely functions as a beach resort for Northern sun-seekers and a duty-free shopping zone for Spaniards.

Built around the eponymous rock — a truly impressive formation that juts abruptly out of the turquoise sea — this island refuge offers a lovely beach, a glamorous yacht-filled harbor and boardwalk, a strange colony of monkeys indigenous to the territory, and plenty of glitzy shops where you can spend your euros.

Another alternative, for those seeking cultural contrast, is to head west from Seville into Portugal. The southern coast of Spain’s Iberian neighbor is called the Algarve; while largely unfamiliar to Americans, its sandy coves are mobbed by Europeans in summer. Outside of high season, however, the Algarve can be a lovely, low-key escape from the cultural spectacle that is Andalusia. It’s only a few hours from Seville to Faro, the capital of this coastal region, where the blue-tiled façades and white stucco lanes are distinctively Portuguese. Faro has a lovely old town, plenty of cafés, and a waterfront promenade with glorious views across the blue Atlantic.

You could also explore the pretty — if highly commercial and occasionally seedy — Andalusian port cities: Cádiz and Málaga. Or you could make a project of savoring the whitewashed hill towns that lie between the two cities, or the tiny fishing villages that fly under the tourism radar out of season. There are as many faces to southern Iberia as there are stones in the Alhambra — and there has never been a more propitious moment for immersion in the vanished glories of Jewish Al-Andalus.