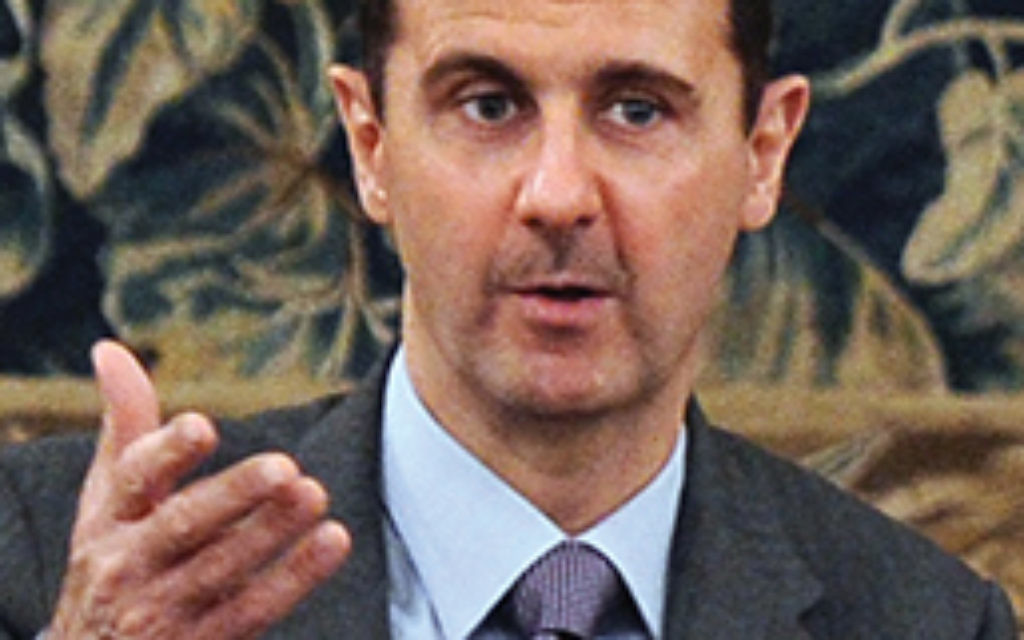 Tel Aviv — The Quneitra Overlook rest stop at the eastern edge of the Golan Heights border with Syria offers a front-row-seat look into a country decimated by five years of civil war.

One recent morning, the Syrian side of the border seemed normal and quiet. But it’s a calm that belies the changing tide of the fighting that has seen Russia’s military intervention give a major boost to President Bashar Assad and his alliance with Iran and Hezbollah.

Now, as a fragile cease-fire went into effect this week reflecting Russia’s tip in the power balance, will the new geopolitical dynamics at play prompt a rethinking of Israel’s five-year policy of keeping out of the civil war?

“There are worries that the Russian involvement will bring Assad back to life in a way that he will rule the country again under the supervision of Iran,” said Alon Liel, a former director general of the Israeli foreign ministry. “I don’t think Israel is enthusiastic about that.”

On Sunday, Prime Minister Benjamin Netanyahu welcomed the cease-fire despite skepticism in Israel that it will hold over the long term. Netanyahu reminded the powers involved that Israel reserved the right to intervene to prevent weapons transfers to Hezbollah and to block Shia-allied groups from establishing a new hostile front along the Golan Heights.

“Israel wants to preserve its freedom of action,” said Ofer Zalzberg, an Israel analyst at the International Crisis Group.

“Netanyahu is concerned that there is a period now in which every use of arms is seen as a breach, which endangers the entire cease-fire.” Netanyahu is saying that Israel’s “red lines” are separate from the cease-fire and defending them doesn’t violate it, Zalzberg said.

The bigger question concerns what Israel should do — if anything — in the face of the resurgent Russian-backed axis of Assad, Iran and Hezbollah. Amid the growing possibility that a weak Assad might give a freer hand to Hezbollah and to Iran, already strengthened by the removal of economic sanctions, should Israel change its policy of neutrality on the outcome of the civil war?

“Until now Israel has acted wisely, setting minimal number of red lines,” said Ehud Eiran, a political science professor at the University of Haifa. “Israel has been realistic about its [limited] ability to affect the events in Syria, and I don’t think this is changing.”

Part of that neutrality stemmed from a lack of attractive outcomes: Israeli officials remain split over whether it was preferable for Assad to remain in power as “the devil Israel knows” or whether it prefers a chaotic alliance in its place that could further destabilize its northern neighbor.

Eiran noted that, with the stepped-up Russian involvement, Israel’s room for military action inside of Syria has been constrained. Indeed, the two countries have established a coordination mechanism in recent months to avoid a confrontation.

Despite the concern, analysts have pointed to an upside: Israel can use its dialogue with Russia to communicate to Iran and Syria what its red lines are.

In an article in the Haaretz newspaper last week, military commentator Amos Harel wrote that while Jerusalem isn’t expected to step up military action in Syria, Israel will lobby harder for Western intervention to help the Kurdish and Sunni rebels.

Writing shortly after Russia stepped up its actions in Syria, Amos Yadlin, a former Israeli military intelligence chief, argued that given Moscow’s deepened involvement in the hostilities, Israel should consider more actively trying to topple Assad.

Israel could “find itself in an inferior strategic position,” because Russia’s involvement could provide a “seal of approval” for Iranian activity in Syria for years to come, wrote Yadlin, now the director at Tel Aviv University’s Institute for National Strategic Studies.

Yadlin argued for tightening Israel’s quiet ties with Saudi Arabia and reaching a reconciliation with Turkey — another enemy of Assad — to pressure the Syrian regime. In recent weeks Turkish leaders have made optimistic statements about finally mending the five-year rift with Israel, though Russia (along with Egypt and Greece) is reportedly trying to dissuade Jerusalem from the rapprochement with Ankara. The former general also suggested that Israel persuade Russia to push Assad aside.

Since the Russian intervention began last summer, Israeli observers have already taken note of the scope of support rolled out for the pro-regime forces: In the southern province of Daraa near the Jordanian border, Russian aircraft have provided air cover for Shiite irregular militias and Hezbollah forces that focused on retaking a town, known as Sheik Miskeen, that is at a strategic crossroads linking the south to Damascus.

“Hezbollah showing up in the south has raised some eyebrows among the Israelis,” said Andrew Tabler, a fellow who focuses on Syria at the Washington Institute for Near East Policy. “They think they are down there to set up another front.”

In the last year, Israel is believed to have launched attacks that killed a key Iranian general and high-ranking Hezbollah officers who were in the border area near the Golan.

Two months ago, an Israeli security official looked out to the border and gave a rundown of the diverse variety of militias active along the frontier: In the north near the Hermon were regime forces and regime-allied Druze militias. Near the border town of Quneitra, a mixture of Free Syrian Army and jihadist groups were fighting the regime and among themselves.

Israel has been giving medical care and humanitarian support to Syrians from rebel villages and militants from the border area. Beyond the humanitarian gesture, the goal is to keep the frontier region as quiet as possible and prevent cross-border attacks. “It’s to create a ‘good fence,’” said the official, a reference to an Israeli crossing into Southern Lebanon during the 1980s.

For all the potential troubling fallout, Russian regime forces are still far from the frontier area with Israel — mostly focusing on the north. For the foreseeable future, Jerusalem and Russia want to avoid an entanglement, each for its own interests.

“Israel is careful about Russia; the sense is that [Moscow’s presence] doesn’t play into the hands of Israel,” said Eyal Zisser, a political science professor at Tel Aviv University who is an expert on Syria.

“From the beginning, Israel hasn’t had a clear policy about what we want to happen, and whether we should do anything,” he added. “I don’t see any change.”