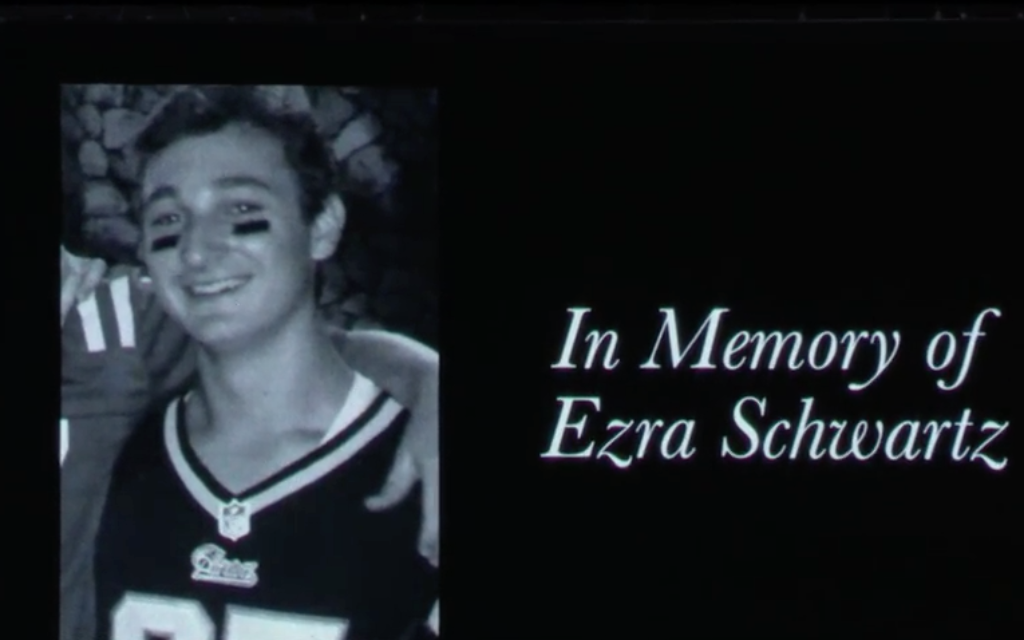 The New England Patriots held a moment of silence to honor slain American yeshiva student Ezra Schwartz prior to their “Monday Night Football” victory over the Buffalo Bills.

Schwartz, 18, was shown on the large video screens at Gillette Stadium in Foxborough, Massachusetts — near his Sharon home — wearing a Patriots jersey as the public address announcer spoke.

The introduction to the moment of silence before the nationally televised game did not say that Schwartz was studying in Israel when he was killed Nov. 19 by a Palestinian gunman in the West Bank.

“Ladies and gentlemen, in a month when the NFL salutes the service of our brave men and women in our armed services, we also pause to remember the many who have recently lost their lives in senseless terrorist attacks abroad,” the announcer said. “Last Thursday, this reality struck close to home, when 18-year old Ezra Schwartz, a native of Sharon, Massachusetts, was gunned down nearly 5,500 miles from home while studying abroad. At this time we would like to honor Ezra Schwartz and hundreds of victims like him with a moment of silence.”

Patriots owner Robert Kraft, who is Jewish, stood in silence on the sidelines during the tribute.

Schwartz was buried Sunday in Sharon. At his funeral, story after story told by family members and his Maimonides School baseball coach recalled him as a loyal Patriots fan who proudly wore the team’s jerseys and caps.