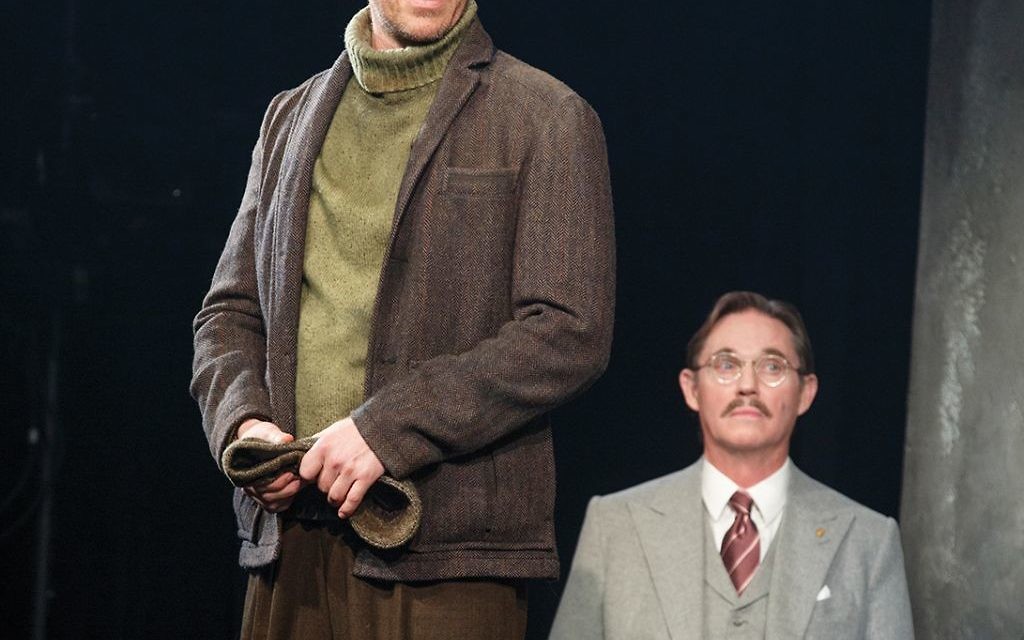 Deeply flawed human beings making profound moral choices populate almost all of Arthur Miller’s plays. But the Jewish dramatist rarely dealt as explicitly with the world’s collective responsibility for the Jews of Europe as in his 1964 one-act play, “Incident at Vichy”; it centers on a group of nine men and a boy who have been rounded up by German military and French police in Vichy France, and who wait to be “inspected” to see if they are Jewish under the laws of the Nazi “puppet” regime.

An Off-Broadway revival of the play opened last week in Midtown, where it joined other New York productions, such as the New Yiddish Rep’s “Death of a Salesman,” in marking the centennial of Miller’s birth.

Directed by Michael Wilson, “Incident at Vichy” is an ensemble piece with a cast of 17 actors, including Richard Thomas (John-Boy Walton on the 1970s TV series “The Waltons”), Frank Gaad (an FBI agent on the current FX show “The Americans”) and Jonathan Hadary (Herbie in the Tyne Daly production of “Gypsy” and Roy Cohn in the national tour of Tony Kushner’s “Millennium Approaches”).

In the first half of the play, the mostly Jewish prisoners, who include a psychoanalyst, an electrician, a rabbi and a painter, initially struggle to comprehend their situation, debate whether or not they are being detained for a routine check of their identity papers, and argue about whether or not the heart-stopping rumors of cattle cars and concentration camps could possibly be true. In the second half, as one by one they are summoned for their fateful (and ultimately fatal) interrogations, they discuss wider questions of the responsibilities that people owe to one another in situations of life and death.

The play climaxes with a highly charged conversation between the psychoanalyst, LeDuc (Darren Pettie), and a mistakenly arrested Austrian prince, Von Berg (Thomas); in the exchange, LeDuc reminds the guilt-stricken nobleman that “Each man has his Jew; the black, the yellow, the white, it is the other. And the Jews have their Jews. And now, now above all, you must see that you have yours — the man whose death leaves you relieved that you are not him…”

Inspired by Miller’s trip to the Mauthausen concentration camp and his witnessing of Nazi murder trials in Frankfurt in 1963, “Incident at Vichy” ran for only 32 performances over a five-month period when it first opened as a Lincoln Center Repertory Theatre production at the ANTA Washington Square Theater, while Lincoln Center itself was being redeveloped. It got a rave review from Howard Taubman of The New York Times, who called it “a moving play, a searching play, one of the most important plays of our time.”

But the production quickly fell victim to infighting among the leaders of the Lincoln Center Repertory Theatre: Harold Clurman, Elia Kazan and Robert Whitehead. The play has rarely been seen in New York since; a revival by the Actors Company in 2009 was panned by The New Yorker as “minor Miller,” a “heady exploration of guilt, fear, power and complicity that, unfortunately, never quite transcends the realm of philosophical exercise.”

Wilson aims to banish that perception with his production and to demonstrate that “Incident at Vichy” deserves to take its place in the canon of major Miller works. The original production, he told The Jewish Week in a telephone interview last week, took place only two decades after the events that are depicted. “People were reluctant in those days to confront this subject matter,” he speculated. But nowadays, he noted, our television screens brim with series like “Homeland” and “Narcos” that “take us every day to the atrocities of our time.”

In writing about “arguably the greatest atrocity ever to unfold in the history of our civilization,” Wilson added, Miller created a “strong dialectical argument for our responsibility to society, community, and to mankind, along with the dangers and perils of betraying that responsibility because of family allegiance or selfish motivation.” He called the play a “serious thriller,” a “spine-tingling and suspenseful” evening of theater. Two Jewish couples who attended a recent preview told him that the play had “ripped through them — their whole bodies were shaking at the end.”

In an interview with The Jewish Week, Thomas called “Incident at Vichy” a “big play in a small play’s body.” He noted that Miller examines a “dizzying” number of themes, including “passivity, the trained sense of victimhood, the difference between having morality and taking action.” Even those who pride themselves on having liberal values, Thomas observed, are often blind to the fact that they are “plugged into an oppressive system,” such as the oppression of African-Americans during the time period in which the play premiered, which Miller referred to frequently in his explanations of the play.

Joshua Polster, who teaches performing arts at Emerson College in Boston, is the former president of the Arthur Miller Society, which promotes the playwright’s works both in America and abroad. Polster told The Jewish Week that while the characters in “Incident at Vichy” may not be as “fully fleshed” as those in many of Miller’s other works, he sees a strong thesis in the play about “our need to not let our sense of guilt override our sense of responsible action.”

While the use of the word “incident” in the play’s title may seem, on the surface, to minimize what occurs in the play, Polster pointed out that Miller, “focuses time and again in his work on a particular family in order to make sense of larger events.”

After all, Polster reflected, “what seems like a relatively minor incident, once allowed to get out of control, can avalanche into a calamity.” Polster perceives alarming parallels between the play and what is happening today in different parts of the world, especially in France, where Jews are again fleeing from resurgent anti-Semitism. The play, Polster concluded, is “so powerful and gripping” that it will, he predicts, “continue to resonate for many years to come.”