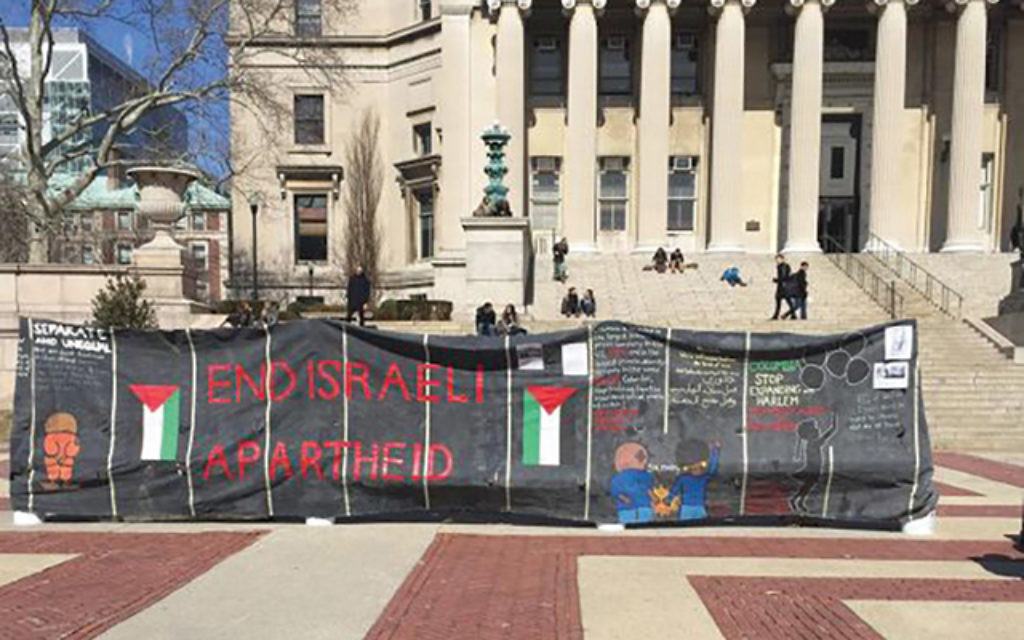 Emboldened by recent campaigns to get Columbia University to divest from the private prison industry and from fossil fuels, a coalition of university students is spearheading a new campaign to divest from Israel.

And pro-Israel forces on campus appear ready for the fight to come.

The BDS campaign — titled Columbia University Apartheid Divest — is the first student-led boycott, divestment and sanctions campaign to embroil this university. Previous BDS campaigns were led by Columbia faculty and resulted in no policy changes.

But, according to Jewish students leading the initiative, this time promises to be different.

“We absolutely feel inspired by the recent success of the private prison industry divest campaign,” said Eva Kalikoff, president of Jewish Voice for Peace (JVP), one of the two student groups sponsoring new BDS efforts. “We are thrilled they were successful so quickly — it’s unprecedented to have that happen within one school year. We hope our campaign shows the same forward motion.”

JVP and Students for Justice in Palestine, the campaign’s co-sponsor, are tapping into a tight network of student groups to garner support. No Red Tape, which fights sexual violence and rape culture at Columbia, Student-Worker Solidarity, which promotes economic justice, and the Columbia Queer Alliance, an umbrella group for LGBT students, have all endorsed the campaign.

“Intersectional support is key,” said Kalikoff, who said events about BDS in conjunction with other causes, including climate justice, sexual assault, mass incarceration and racism, are in the works.

Last week, JVP and SJP ran their first event publicizing the campaign, entitled “BDS 101”; according to Kalikoff, 65 students attended, and they had to turn away almost 100 students due to lack of space. A petition is also circulating among students and faculty — Kalikoff said numbers will be released shortly. Another introductory seminar, open only to Columbia students, is scheduled for this Thursday night.

One Columbia senior and pro-Israel campus leader, who asked not to be named for fear of retaliation, described the overall mood at the first meeting as “triumphant and ecstatic.” Many students were wearing keffiyahs, checkered scarves worn as a symbol of Palestinian nationalism. “The few people who asked questions were shot down,” she said, citing examples of someone who asked about Hamas’ open support of terrorism and another attendee who asked about the death penalty for homosexuality in Gaza. “People mostly laughed and sneered at questions.”

In response to the divestment campaign, pro-Israel student activists launched a counter-campaign called “Invest in Peace.” The purpose of the campaign is to educate students about how divestment generates distrust, and will only make it harder to achieve peace between Israelis and Palestinians, said Daniella Greenbaum, president of Aryeh, the Columbia student association for Israel.

“The Hillel community is by no means monolithic, and there is a wide range of views on Israel,” she said. “But on BDS we agree — it is a stumbling block to peace. Our agenda is to demonstrate to the campus community that BDS actively damages the peace process by generating distrust and in calling for a one-state solution. From an economic standpoint, BDS is bad for both the Israeli and Palestinian economies. Our mission to therefore to demonstrate to the Columbia community that divestment hurts all involved parties.”

Still, as students from both ends of the spectrum hone their arguments, experts remain doubtful that the campaign will end differently than the other BDS efforts, most of which have fizzled on American campuses. Over the past 10 years, only 18 schools, or .009 percent of all American universities, have approved a BDS resolution, according to research conducted through The Jewish Week’s Investigative Journalism Fund. Of the 70 total votes that have been taken on BDS measures at American universities, 64 percent of resolutions were defeated.

“No divestment motion to date has led to changes in investment procedures,” said Kenneth Waltzer, co-founder of the Academic Engagement Network (AEN), a recently formed national faculty coalition that aims to unite academics to facilitate constructive dialogue about Israel. “If you go back over recent confrontations on campus, faculty voices have been consistent in opposing divestment. It’s an unproductive activity — it doesn’t change anything with respect to actual relations between Israelis and Palestinians in the Middle East,” he said.

Still, mounting a campaign itself promises to fuel the national BDS movement’s end goal, he said: to “delegitimize and demonize Israel.” On a campus as prominent as Columbia, the effects of a student-led BDS effort may be magnified. The Palestinian BDS National Committee is a broad coalition of Palestinian organizations, trade unions, networks and NGOs; the group refers to the Jewish state in quotations marks on its website.

“These students made no bones about it — they openly and unabashedly allied themselves with the national BDS movement,” Waltzer said, adding that this is something he hasn’t seen from students in the past. “It’s going to come back and bite them. They don’t realize it, but now they’re saddled with all the commitments and goals of the movement. They can’t claim they only stand for peace.”

JVP student activists stressed the “symbolic” nature of the campaign. Rather than advocating Columbia divest from all Israeli businesses, they selected eight companies for their “educational value.” For example, they selected Caterpillar Inc., an American corporation that sells machinery, because Israel buys bulldozers for the Israeli Defense Forces from the company. Of the eight companies selected, students behind the campaign admitted to not knowing whether Columbia held any shares in these companies.

“For me, JVP represents a growing number of Jews who see a disconnect between the values of tikkun olam that we grew up on and how Palestinians are being treated under the occupation,” said Julia Peck, 22, an active member of JVP who stands behind the divestment campaign. Though Peck, who grew up in a strong Conservative home, at first held “reservations” about supporting BDS, she concluded it is the most efficient, non-violent way to end what she sees as serious human rights violations.

“We recognize the need for Jewish safety in a world that hasn’t been kind to us, but we refuse to make another people pay for that with their homes, freedom and their lives,” Peck said. She added that the BDS movement does not aim to demonize Israel; rather, it recognizes Israel as a country that can make changes so a “just peace” can take place. (Most Jewish leaders do believe that the BDS movement seeks to demonize Israel and that the movement may even be a cover for those who oppose the idea of a Jewish state.)

Noam Gilboord, director of Israel and international affairs at the Jewish Community Relations Council of New York, said that Columbia’s divestment campaign “does not ring any new alarm bells,” though it is cause for concern. Still, focusing only on BDS on the college campus largely misses the point, he said.

“Very carefully, very quietly the BDS movement has been gaining steam in academic and professional associations, mainline church movements, the cultural sector, pension funds. While campuses are what we in the Jewish community are primarily focusing on, the BDS movement’s end goal is not to make campus leaders anti-Israel. It is to gradually erode American support for Israel, so that in a generation from now we will have a completely different relationship with Israel.”

Marissa Young, a member of the executive board of Aryeh, said that the divestment campaign’s push for “intersectionality” leaves many Jewish students feeling marginalized.

“It is an extremely divisive campaign,” she said. As a senior graduating in the spring, she said it is “scary” to leave campus knowing that people “really do see this as a liberal cause.”

“They think what they’re fighting for is really about equality and rights — when someone can’t even be gay in Gaza without being killed, and Palestinian leaders refuse to condemn terrorism.”