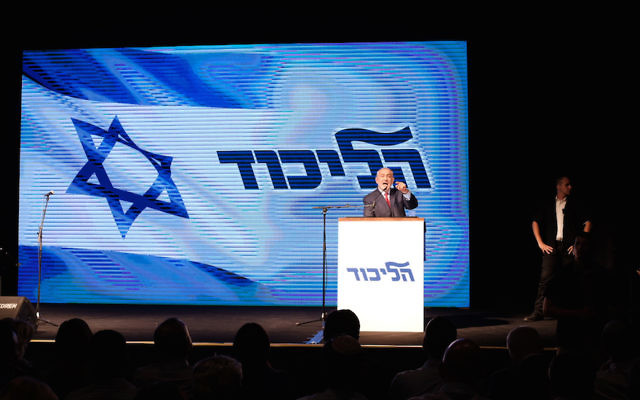 Held Wednesday at the Tel Aviv Fairgrounds, the rally was organized by coalition chairman and Likud lawmaker David Bitan, who told Israeli media he organized the rally because Netanyahu is being “persecuted” by the media and the opposition. Supporters were bussed in from around the country for the rally.

In his speech, Netanyahu slammed the “fake news” media, echoing a sign at the rally that said “Fake news is f***ing news.” Some journalists said they were verbally abused by rally participants.

Netanyahu called the corruption investigations “an obsessive witch-hunt against me and my family.”

“They don’t want to just take me down, they want to take us all down. They know that they can’t beat us at the ballots, so they are trying to circumvent democracy and topple us in other ways,” Netanyahu said.

“We know that the left and the media — and we know that it’s the same thing — is on an unprecedented hunt against me and my family to bring down the government. They are putting unrelenting pressure on the legal system in order for them to present an indictment without any proof,” he said.

Netanyahu is currently the subject of two corruption investigations. In the first, called Case 1000, Netanyahu is accused of receiving expensive gifts from billionaires and then taking action on their behalf. In the second, called Case 2000, he is accused of striking a deal with a newspaper publisher in order to receive favorable coverage at the expense of a competitor, Israel Hayom, owned by the casino magnate Sheldon Adelson.

Two other corruption scandals target close associates of Netanyahu and both his wife and older son also are targets of investigations.