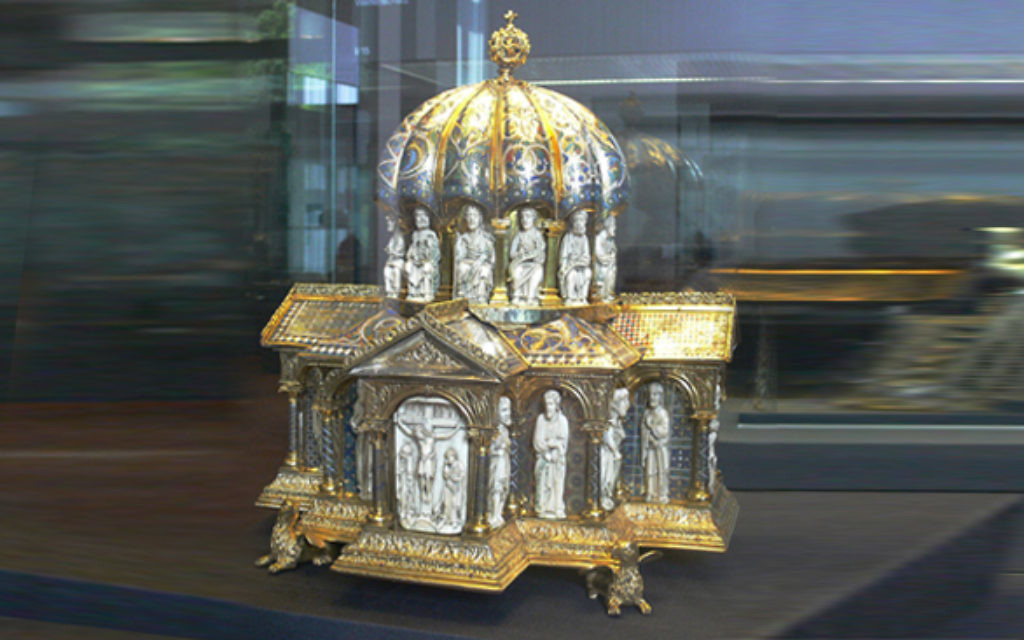 The German government has laws on the books that will get you thrown in jail for denying the existence of the Holocaust. It mandates that all schoolchildren, starting at age 12 and for years after that, learn about what happened to the Jews under Nazi rule. It has paid out an estimated $90 billion in reparations to Holocaust survivors and their heirs over the last 60 years.

And on the fast-moving story of the return of Nazi-looted artwork to its rightful Jewish owners — one that has landed in Hollywood with the hit film “Woman in Gold” — Germany has pledged greater transparency.

But in a federal courtroom in Washington, D.C., the German government is showing another, arguably darker, side.

In seeking to dismiss a lawsuit over a long-contested trove of medieval ecclesiastical relics known as the Guelph Treasure that Germany bought from three Jewish art dealers in 1935, the government has now dropped a legal bombshell, one that actually seems to challenge the historical record.

The sale could not have been forced, the German government argued in court papers submitted earlier this month in U.S. District Court, because “the sale predated the Holocaust by several years.”

Holocaust scholars are shocked by Germany’s line of argument, calling it “cynical” and saying that it amounts to “revisionist history.”

“It’s ridiculous,” said Deborah Lipstadt, a professor of modern Jewish history and Holocaust studies at Emory University in Atlanta and a former consultant to the U.S. Holocaust Memorial Museum in Washington.

“If you define the Holocaust as the killing of Jews, it began in the summer of 1941,” she said. “But to ignore the terrible persecution and prejudice and limitations placed on the lives of Jews that started in 1933 is ludicrous. … It is a cheap shot. It was a forced sale because Jews were forced to sell things because they were denied the right to make a living.”

Marion Kaplan, a professor of Hebrew and Judaic Studies at New York University who has taught 19th and 20th century German history, said she was “shocked” by the German claim.

“The idea that the ‘Holocaust’ started with the war is wrong,” she said. “Social death started in 1933 and physical death followed. Indeed, many Jewish men died in concentration camps directly after Kristallnacht [November 1938] — well before the war.”

Thus, assigning a start date for the Holocaust — in a legal if not a moral sense — is admittedly an imprecise exercise. Did it begin when the National Socialists took power in 1933? When the Nuremberg Laws were signed in 1935? When the state-sponsored rampage against Jewish businesses — Kristallnacht, the Night of Broken Glass — terrorized the Jewish population in 1938? When the Nazis signed off on the Final Solution in 1941? When mass killings with stationary gas chambers began in 1942?

The case of the Guelph Treasure, in which heirs of the Jewish art dealers are seeking its return, may throw a light on this complicated legal question. The treasure is a collection, primarily of precious gem-encrusted Christian devotional masterpieces, such as reliquaries and crosses, that is valued at about $250 million. The most valuable piece is a 12th-century domed reliquary shaped like a church and made of gold, copper and silver. Biblical figures carved from walrus tusk encircle the work.

Had the heirs sought the collection’s return years ago, the legal fight over its ownership might not have been questioned. In 1943, the Allied governments recognized that the Nazis either confiscated or compelled victims of religious, racial and political persecution to sell their businesses, houses and other property under duress. They then issued the London Declaration that said the allies would no longer recognize the transfer of property in occupied countries even if it appeared legal — a doctrine codified into law after the war that was adopted by the new German Federal Republic in 1949, according to an attorney for the heirs, Markus Stotzel.

He said Germany rescinded it in the 1960s in the belief all restitution claims had been resolved. But in the last decade or so, the heirs of several Jewish art collectors have come forward to assert claims to looted art, some of it hanging in German museums. The heirs to the Guelph Treasure began their efforts seven years ago.

In response to the new claims, Germany promised to be transparent and efficient in restituting works of art. In 2003 it created an eight-member commission headed by Jutta Limbach, former head of Germany’s Federal Constitutional Court, to mediate all disputes regarding cultural property — including art — seized by the state as a result of Nazi persecution.

The commission heard the Guelph case shortly after the issue of German art restitution made headlines worldwide late in 2013 with the admission by the Bavarian state that it had quietly recovered 1,400 pieces of art — much of it looted by the Nazis — that had been secretly hidden by the son of a man who had been an art dealer for Hitler.

In its Guelph case decision, issued in March 2014, the commission noted that the collectors had bought the artifacts in 1929 for 7.5 million reichsmarks. They later sold about half of them and in 1934 began negotiations with the Dresdner Bank for the rest. The bank was secretly acting in behalf of the Prussian state government headed by its prime minister, Hermann Goering, the second most powerful man in Germany after Adolf Hitler rose to power in 1933.

Negotiations over the price concluded in July 1935, and the Limbach commission said there were “no indications that the art dealers and their business partners were placed under pressure in the negotiations … [and thus were not forced to sell] as a result of Nazi persecution.”

A spokesman for the German Embassy in Washington said his government agrees with that opinion and is “committed to the fair and just resolution of legitimate claims to Nazi-confiscated art, consistent with the universally accepted guidelines of the Washington Conference Principles on Nazi-Confiscated Art.”

“The federal government,” he added, “therefore believes that the civil case stemming from a 1935 sale of medieval relics by a group of German art dealers has no merit and should not be heard in [a] U.S. court.”

The art dealers were paid only 4.2 million reichsmarks, which was “one-third or less than its market value,” according to Mel Urbach, Stotzel’s co-counsel. He said they sold it to Goering — who later presented it to Hitler as a gift — believing they would be killed if they did not.

Urbach said he and Stotzel represent relatives of another art dealer who was imprisoned and tortured by the Nazis before he would sell to them. And he said they have a number of other cases in which the German government is refusing to recognize legitimate claims of Jewish heirs to works of art, buildings and property.

“We see a pattern here where Germany is revising the Holocaust and using technicalities [defenses such as the statute of limitations] to disrespect the suffering of so many people during the early years of the Nazi regime,” he said.

The lawyers submitted several expert opinions from Holocaust historians to support their claims.

One was from Wolf Gruner, chair of Jewish studies and a professor of history at the University of Southern California, who is a specialist in the persecution of the Jews in Germany. He wrote that within weeks of Hitler being appointed chancellor on Jan. 30, 1933, he “subjected political dissidents and Jewish Germans to extreme persecution. Jewish people were mistreated in many towns in the first months of 1933, put into concentration camps, their stores were attacked and boycotted, and they were pushed out of professional and economic life by many different means.”

Gruner noted also that officials in Frankfurt am Maim, home of the three Jewish art collectors, “made a common practice of preventing the transfer of the coveted art assets of the Jews to overseas by having these entered on the list of nationally valuable assets.”

He pointed out also that one of the three art collectors, Saemy [cq] Rosenbaum, concluded the negotiations in Berlin and could not have failed to notice daily demonstrations in front of Jewish-owned stores.

“Spoken choruses of ‘Don’t buy from Jews’ were intended to prevent customers visiting,” he wrote. “Shop windows were scrawled and painted with anti-Jewish slogans. The police had to intervene repeatedly and restore order. … In such circumstances, there can be no question of any kind of normal sale transaction, unaffected by the daily and ubiquitous active discrimination and persecution …

“This transaction is therefore tainted by the stain of `persecution conditionality’ … because the sale took place under conditions that were not equitable and market value appropriate.”

Although Rosenbaum later left Germany and started his business anew in New York, his associates were not so fortunate. Julius Goldschmidt escaped to London but is said to have lived an impoverished life. And Z. M. Hackenbroch was reportedly dragged to his death through the streets of Frankfurt by a Nazi mob in 1937.

Rabbi Abraham Cooper, associate dean of the Simon Wiesenthal Center in Los Angeles, said the German government’s claim that the 1935 sale “predated the Holocaust by several years” is “simply disgusting and dangerous.”

“I understand the tactic of what they are trying to do — saying that the sale was normal,” he told The Jewish Week. “But for a Jew in Germany in 1935, life in Germany was anything but normal. … The fact that it was sold in 1935 — you would have to prove to me there was no linkage.”

Holocaust historian Timothy Snyder, author of the critically acclaimed new book, “Black Earth: The Holocaust as History and Warning,” told The Jewish Week that although the “mass murder of Jews began in the summer of 1941, the discrimination [against them] began in 1933.”

“The reasons why people would want to get out of Germany and be compelled to sell things begins in 1933,” he said. “Their [the German government’s] argument is shameful. It means that unless there was mass murder, nobody was discriminated against. The fact that they killed many of the people later does not mean it was alright to discriminate against them earlier. Nobody would say that. All of the historians who work on the Holocaust focus on the discrimination that began in the 1930s.”

Atina Grossmann, a teacher of modern European and German history at Cooper Union, said in an email to The Jewish Week that the German government’s claim is “a rather specious argument in terms of compensation for expropriated Jewish property in Germany since we clearly have anti-Jewish policies and actions in place from 1933 on — all before the beginning of the war and well before the implementation of the Final Solution and the enactment of any plans for the extermination of European Jewry.”

About Germany’s claim in the Guelph Treasure case, Grossmann added: “So yes, technically correct, but in this case certainly an irrelevant and specious cynical argument. The Germans know better.”