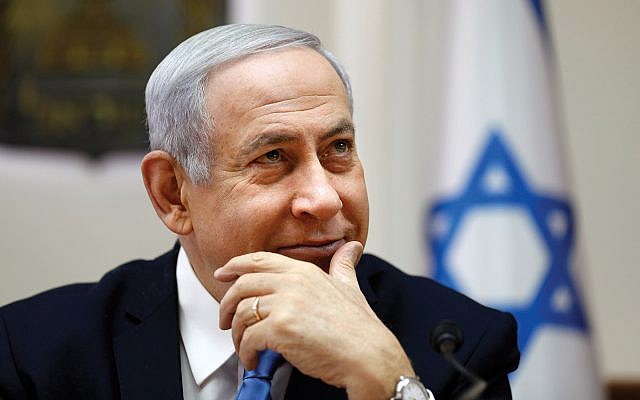 It was beyond the 11th hour of the election campaign in 2015, the voting well under way. Fearing imminent defeat, Prime Minister Benjamin Netanyahu recorded a desperate and infamous get-out-the-vote video: Arab Israelis were arriving at the polling stations by the busload to bring down the right-wing government.

In the current parliamentary campaign, Netanyahu, who is facing a serious challenge from a new centrist party and facing a looming indictment, is playing to a similar sentiment, except he’s started deploying it with about a month before the April 9 election.

The trigger came over the weekend, when television star Rotem Sela responded on Instagram to remarks by Culture Minister Miri Regev that a government of the center-left would be forced to rely on the votes of “Arabs” to build a coalition.

“When will someone in this government tell the public that Israel is a country of all of its citizens,” Sela posted. “And all humans were born equal. And Arabs too, God forbid, are human beings.”

Within hours, Netanyahu called out Sela on his Facebook account: “Dear Rotem Sela. An important correction,” he wrote. “Israel is not a state of all its citizens. Under the Basic Law that we passed, Israel is the nation-state of the Jewish people, and only them.”

In a campaign where the Israeli-Palestinian peace process is a non-issue, the Israeli election seems to be turning on the status of Israel’s one-fifth Arab minority. In his remarks, Netanyahu referred to the nation-state law, a controversial piece of quasi-constitutional legislation passed in 2018, which critics alleged elevated Israel’s Jewish character over the country’s democratic values and at the expense of Arab citizens.

The prime minister has focused Jewish-Arab relations as a campaign issue because the rival Blue and White party, with three ex-army chiefs of staff, has neutralized Netanyahu’s image as Israel’s “Mr. Security” as a potential selling point.

“He can’t use the security argument. He can’t use the Iranian scare tactics,” said Mohammed Dawarshe, a political expert at the Givat Havivah center for Arab-Jewish coexistence. “What is left for him is social polarization. He wants to conveniently exploit the rifts in Israeli society. What this discourse says is ‘forget about equality.’”

“Wonder Woman” actress Gal Gadot on Monday endorsed Sela’s remarks, writing an Instagram post of her own that “love thy neighbor as thyself isn’t a left-right issue.”

However, few centrist candidates running for parliament came to Sela’s defense. That’s because her comments weren’t seen as politically correct in a climate dominated by Likud.

“It’s brave. She is very much like a child saying the emperor has no clothes. She doesn’t speak the lexicon of politically acceptable terms,” said Dahlia Scheindlin, an Israeli-American public opinion analyst.

“The phrase a ‘state of all its citizens’ has always been interpreted here as implying that Israel should have no Jewish ID at all, or else that Arabs should also have collective rights.”

Netanyahu and Likud politicians have been hammering home claims that a government headed by the newly created Blue and White party and former chief of staff Benny Gantz would require the participation of Arab political parties. They’ve framed the election as a choice between “Bibi or Tibi,” referring to Knesset member Ahmed Tibi of the Arab Joint list.

The Anti-Defamation League also issued criticism of the rhetoric.

“The role of Arab parties in the Israeli Knesset is increasingly emerging as a key wedge [issue] in the current election campaign, with several party leaders and politicians vowing not to include them in any future coalition,” said ADL Israel office director Carole Nuriel in a statement.

“In some cases, even the distinction between Arab parties and the Arab population is blurred, and these parties are simply referred to as ‘the Arabs.’ This anti-Arab rhetoric is a deeply troubling trend that, if it continues, could undermine Israel’s vibrant democracy.”

The anti-Arab rhetoric isn’t new in Israeli election campaigns, political analysts noted. In 1996, Netanyahu deployed the “Bib or Tibi” slogan when he ran against Shimon Peres during the peace negotiations with the Palestinians. In 1999, Netanyahu infamously adopted the slogan that he “was good for the Jews.”

In 2009, Avigdor Lieberman used the controversial “without loyalty, no citizenship” slogan against Israeli Arabs, thrusting the status of Israeli Arabs into the campaign spotlight.

“Race has been part of an open campaign of ethnic targeting since 2009,” said Scheindlin. “Lieberman was the first to say, ‘no loyalty, no citizenship.’ That was what won him 15 seats in Knesset in 2009. He legitimized that discourse in the election.”

The debate is liable to disillusion Arab citizens and dampen voter turnout, which hit a record 63 percent in 2019. Surveys suggest that more than 40 percent of Arab voters may stay at home in the upcoming election, a development that would help tip the election to Likud and the right-wing bloc.

Dawarshe said there is already low morale among Arab voters because of the breakup of the Joint List, which won 13 seats in 2015. This year there are two separate slates running for parliament. Low turnout due to frustration over the rhetoric could leave one of the two Arab parties short of the electoral threshold of 3.25 percent of the vote required to win seats in the parliament.