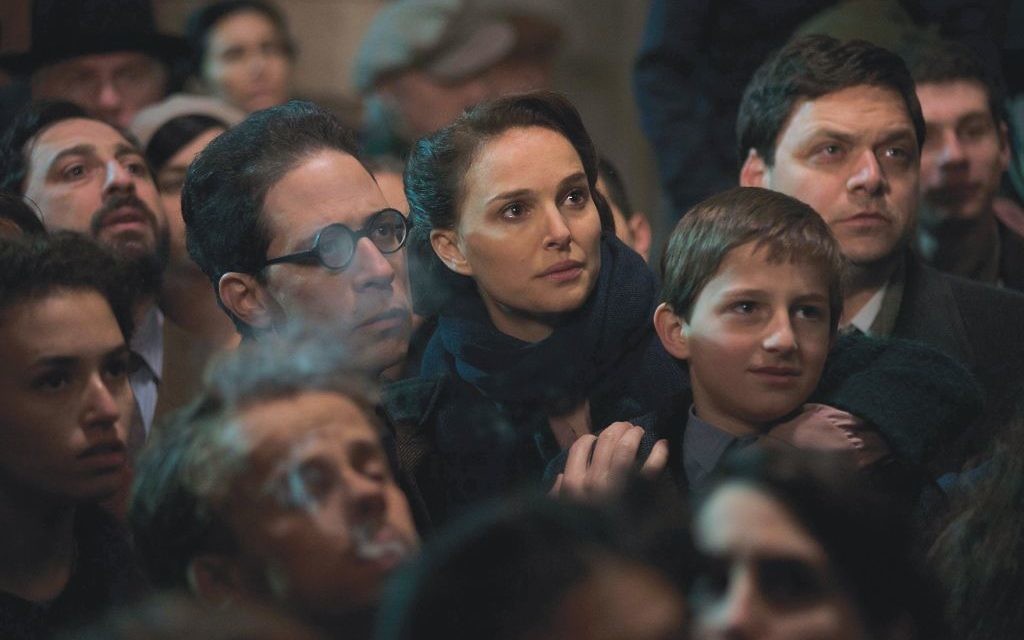 Never let it be said that Natalie Portman lacks courage. At a pivotal moment in her acting career, she opted to go to Harvard for a degree in psychology. She has taken on a number of difficult roles with the potential to disrupt her upward climb and, in one notable case, “Black Swan,” turned the choice into Oscar gold.

And for her directorial debut, she chose a deadly serious, deeply non-commercial literary project, Amos Oz’s memoir of his mother’s psychological disintegration and eventual suicide in the early years of the Jewish state, “A Tale of Love and Darkness.” Portman scripted it herself and cast as the two male leads a rock star (Gilad Kahana of Girafot) and an 8-year-old boy, neither of whom had acted before. And she insisted on making the film in Hebrew.

“A Tale of Love and Darkness” opens Friday, Aug. 19, and Portman is sitting in a dimly lit, artfully appointed conference room in a Soho hotel, politely answering questions for a series of journalists. It is the end of a long day and her face is as pale as the cream-colored suit she is wearing, but she still manages to respond earnestly and sometimes perkily to what must surely be an all-too-familiar set of questions.

As counter-intuitive a choice as the Oz volume might seem for an actress in Portman’s enviable place, she knew from the moment she picked up the book in its English-language translation that she wanted to film it. She has labored for seven years to bring the project to completion.

“I was so moved by the story of this boy and his mother,” she says, “and I was blown away by the language. I immediately saw the film in my head.”

A bigger surprise awaited her: Oz consented to her request for the film rights.

She began the search for a screenwriter and an Israeli actress to play the lead. The writers she contacted kept saying that her concept of the adaptation was so focused that she should write it herself, and the money men kept telling her that without her name above the credits in the role of Fania, the mother, Portman would never get funding for the film.

She shrugs and laughs.

“No one would give me the money for a first film in Hebrew with a difficult story unless I was in it,” she says. “Maybe that’s why it took so long to get it made. I was 27 when I started this project and I needed to mature into the role.”

Portman was born in Israel but was only 3 when her parents moved to Long Island, where she grew up and was educated. She is effectively bilingual in English and Hebrew but readily admits that her Hebrew is rather more rudimentary.

As a result, she wrote her drafts of the screenplay for “A Tale” in English, with Israeli novelist Assaf Gavron translating the text into Hebrew.

“He used the novel as a template,” she explains. “There are passages in the film in which we use voice-over narration that is drawn directly from Amos’s text, and for those Assaf just went back to the novel.”

Did the screenplay change shape when it became apparent that she would have to play the lead role? Portman nods.

“Knowing that I was playing Fania meant that I started to see the story through her eyes,” she says. “It certainly affected the way I wrote, I tried to include more aspects of her personality, of her struggles.”

“A Tale of Love and Darkness” is Portman’s directorial debut.

The character that results might be described as a quieter, more intellectual version of Portman’s “Black Swan” protagonist, a thoughtful but overly sensitive woman whose psyche is buffeted repeatedly by forces she has reluctantly embraced without understanding.

By contrast, the young Amos, played by newcomer Amir Tessler, is grounded, thoughtful in both senses of the word, a surprisingly stable point in the rapidly changing universe of the newly independent Israel.

Although he had never made a film before, the young Tessler was instantly at home on the set.

“He has strong instincts, his first take is almost always the right one,” she says.

Portman wasn’t much older than her young star when she made her film debut in Luc Besson’s “The Professional” at age 11. She was able to draw on her memories of the experience to put the boy at ease.

“When I was a kid, [filming] was fun, more like play than work,” she recalls. “I tried to keep that feeling going with Amir. I tried to make sure that he had a calm, non-yelling environment [on the set].”

When the subject is Middle East politics, “a calm, non-yelling environment” is seldom on the agenda. For Portman, who is adamantly self-identified as a political progressive, and as both an Israeli and an American, the thunderclouds are frequently in evidence. She has been frank in her distaste for the policies of Israeli Prime Minister Benjamin Netanyahu, but equally outspoken in defense of the land of her birth.

While Portman doesn’t shy away from pointedly political questions, she is clearly uncomfortable being adopted as an advocate for a point of view.

“I’m often asked my thoughts ‘as an Israeli,’” she notes, “but I don’t represent anyone but myself.”

The overriding principle underpinning her ostensibly political choices may be gleaned from her reaction when asked if the idealized independent State of Israel anticipated at its birth, a moment depicted in “A Tale of Love and Darkness,” has strayed from those ideals.

“The film definitely deals with the dissonance between dreams and expectations and the reality that follows,” she says. “There isn’t one Zionism, there are hundreds of Zionisms, and none of them have been fully realized to the satisfaction of the people advocating for them.”

She adds, “That’s inevitable. But it’s not a reason to be despondent. Perhaps we are inevitably fated to be disappointed. Coming to terms with that disappointment is part of the challenge of living our lives.”