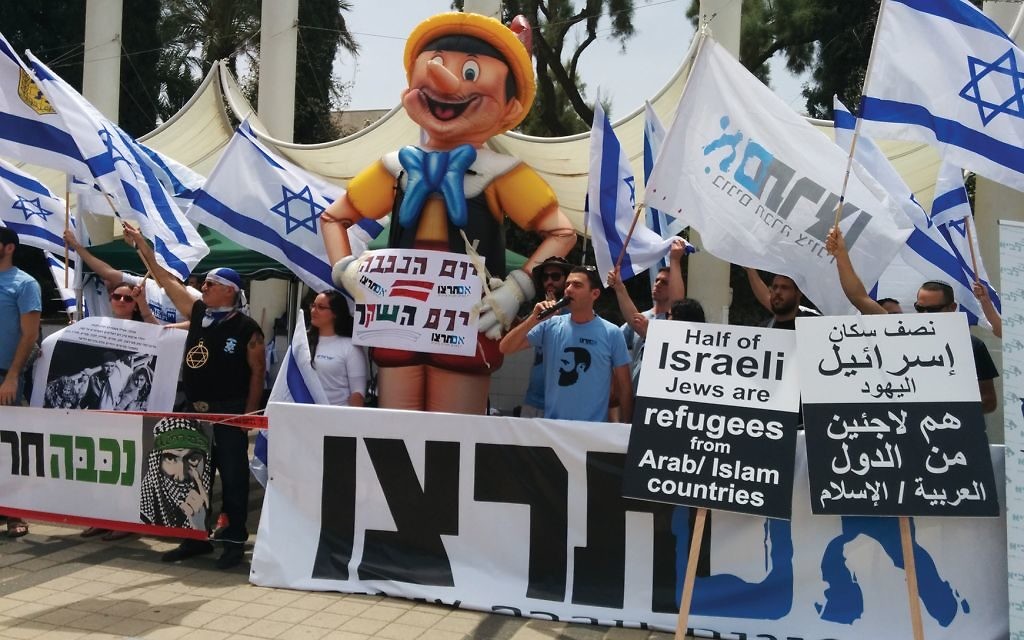 With a lone Palestinian flag affixed to a billboard showing a key and “Nakba” written in Arabic, English and Hebrew, about 150 Arab students and Knesset members marked the “disaster” of displacement from the 1948 war that followed in the wake of the United Nations announcement, a few months earlier, that Israel had gained statehood.

Ceremony participants read names of destroyed Arab villages — including a town that once sat on part of the campus, as university students told stories of the war, and held a moment of silence.

“We refuse to forget the refugees,” declared one of the speakers in Hebrew.

Just a few feet away across a police barricade, a group of Jewish Israelis from the right-wing activist group Im Tirtzu gathered next to a blow-up Pinocchio and held signs reading “Nakba = Lie.” Using a booming loudspeaker that muffled the proceedings at the Nakba demonstration, the counter-demonstrators shouted accusations like “traitor” and “disgrace.” “You support murders,” yelled one of the speakers.

The Tel Aviv demonstration was one of several Nakba ceremonies across Israel and the Palestinian territories on the anniversary of Israel’s 1948 Declaration of Independence. The rival demonstrations highlighted the continuing polarization for Israelis and Palestinians around the two sides’ mutually exclusive narratives surrounding the 1948 war.

“You can’t be happy for Independence Day and then sad for Nakba Day. It isn’t logical,” said Mahmoud Shaib, a computer science student from the northern Israeli village of Daburiyeh, who spoke at the ceremony. Shaib’s grandfather and great-grandfather were ordered to leave their village near the Israeli town of Beit Shean. His grandfather’s family fled to Jordan, but he was able to return and settle in an Arab village at the foot of Mount Tabor.

“I grew up hearing personal stories about what happened to him,” Shaib said of his grandfather. “It could have happened to me if I were alive 68 years ago.”

In attendance at the Tel Aviv University demonstration were parliament members from the Arab-Israeli “Joint List” party. Joint List Chairman Ayman Oudeh said that the Nakba ceremonies shouldn’t be seen as a provocation against the Israeli establishment, but as an opportunity to recognize the suffering of others and boost coexistence.”

“We are in Tel Aviv because we don’t want to just gather in the villages. We want to convey a message to the entire society in Israel that recognizing the wrongs of the past is important for a shared citizenship. It’s not difficult. Everyone knows that there was a nation here that lost their houses and became refugees,” Oudeh told The Jewish Week.

And he sees progress. “A decade ago, none of the Jews knew about what the word ‘Nakba’ was all about. Now most of the Israeli society knows,” he said.

The Nakba ceremony is a relatively new phenomenon: The Palestinian Authority first held it in 1997 as a response to Israel’s 50th Independence Day.

Indeed, for most Israelis, the Nakba observances represent an effort to recast Israel’s founding as tainted in the original sin of ethnic cleansing and expulsion. And it also symbolizes an aspiration on the part of Palestinians to allow millions of refugees to return to the villages of their grandparents — threatening to overrun the Jewish population of Israel — or at least to demand billions of dollars in compensation.

On the other side of the barricade, counter-demonstration leader Matan Peleg said that the purpose of the Nakba observance is to make Israelis feel guilty about the foundation of the country.

“They are calling for the destruction of the State of Israel,” he told Israel Radio. “We can’t be quiet in the face of such anti-Israeli and international propaganda, whose purpose is to undermine our right of existence.”

Those concerns prompted Prime Minister Benjamin Netanyahu’s narrow right-wing government in 2011 to adopt the controversial Nakba law, which allows the government to cut funding to organizations that mark Israel’s Independence Day as a day of mourning.

Though the law doesn’t seem to have resulted in any major cases of defunding of public organizations, civil rights advocates argue that it is having a chilling effect nonetheless by making groups — especially student groups at Israeli universities — think twice before organizing a Nakba event.

“It’s intimidating people,” said Amjad Iraqi, who works in international development for the civil rights group Adalah. A bill pushed by Culture Minister Miri Regev to retroactively cut funds to activities that contradict the “principals of the state” represents another challenge to Nakba observances.

The government “tries to silence people being able to talk about the Palestinian narrative in forms of art and culture,” Iraqi said.

Though Israel’s media has followed the Nakba ceremonies consistently in recent years, there was relatively little controversy over this week’s observances.

Alon Marcus, a left-wing political activist, was one of the handful of Jewish Israelis in attendance at the Tel Aviv Nakba ceremony.

“I’m very far from the Israeli consensus. It took me 20 years to get to this point that I search out these events, and want to participate,” he said. “Symbolically, it’s important that Jews will be part of these events.”

Dahlia Scheindlin, an American- Israeli public opinion expert and essayist, said that most Israelis are content to ignore the ceremonies.

“Israelis would rather think about anything else than the Nakba. And when they think about it, they think whatever bad things happened, it wasn’t our fault,” she said. “Nobody wants to think that their glorious history was tainted — not in any place in the world.”

For Israelis, she said, the stakes are even higher: recognition of the Nakba has implications both for domestic policy and final-status peace negotiations with the Palestinians regarding refugees.

Akiva Eldar, a correspondent for the news website Al Monitor and a diplomatic commentator, said that until Israel and the Palestinians reach a peace deal, the Nakba ceremonies are likely to stir annoyance rather than empathy among Israelis.

“The wound is still open, because it’s unfinished business between us and the Palestinians,” he said. “It’s a zero-sum game between Independence Day and Nakba.”