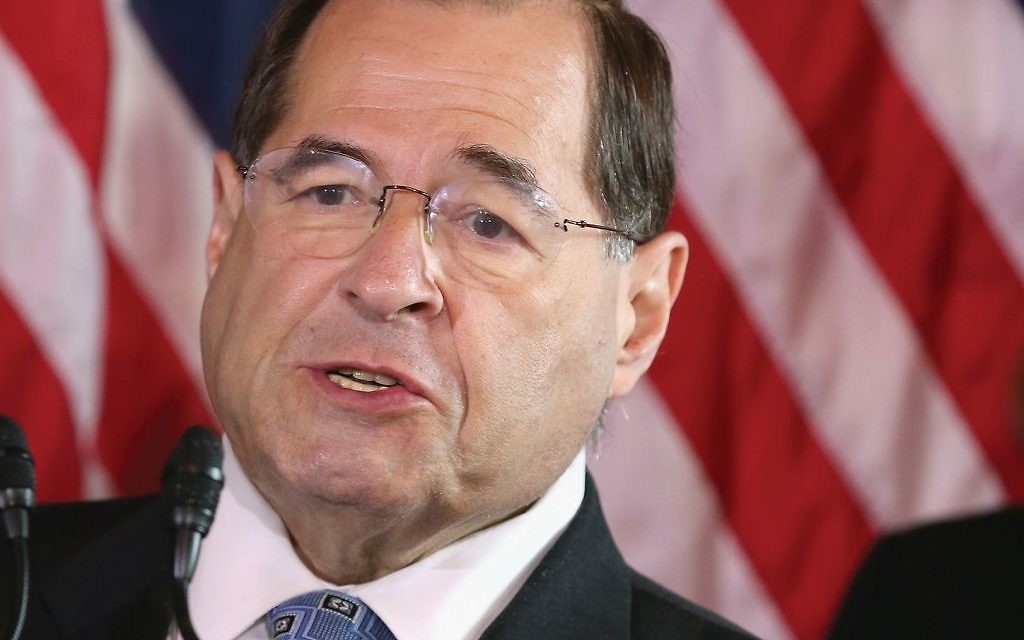 Rep. Jerrold Nadler knew that his announced support last Friday of the Iranian nuclear agreement would trigger an angry response from opponents of the deal.

But he was stunned by stridency and personal nature of the attacks.

“I never expected the vicious nature of the opposition,” he told The Jewish Week. “It’s one thing to be told you are wrong, it’s another to say you know you are wrong and that you are doing it for terrible motives. … People are entitled to their views, but what bothers me is that people are saying, ‘You betrayed us.’ I have been a supporter of Israel all my life. This is my decision and I think it is best for the U.S. and Israel. I could be right or wrong, but to conclude that anybody who supports the deal is opposed to the Jewish people and Israel’s welfare is absurd.”

Nadler explained his decision in a nearly 5,200-word essay on his website. “After carefully studying the agreement and the arguments and analyses from all sides,” he wrote, “I have concluded that, of all the alternatives, approval of the JCPOA, for all its flaws, gives us the best chance of stopping Iran from developing a nuclear weapon.”

And in a 45-minute interview Monday with The Jewish Week, he went through the agreement in great detail. He insisted that although the agreement lifts all restrictions on Iran’s ability to develop a nuclear weapon in just 15 years, the world “would be no better off then than we are now without the deal.”

And in the meantime, Nadler stressed, the deal would increase from three months to 15 months the amount of time it would take for Iran to have a sufficient supply of fissile material to make one bomb. And for the next 15 years there are “air-tight assurances they can’t get a bomb,” he said, referring to the inspection and monitoring system the agreement puts in place.

Many of the personal attacks against Nadler, the only Jewish Democratic House member in the state to support the deal, can be found on Facebook, Twitter, various blogs, radio talk shows and opinion pieces. One writer said flatly that Nadler has “endangered the existence of the State of Israel and has disappointed the Jewish community.” Another referred to him as a “kappo,” a reference to the Jews who worked on behalf of Nazis in the concentration camp. A third called him “a True Traitor to your people and the USA,” and still another wrote that “The blood of Jews and Israel are on your hands.”

Zev Brenner’s call-in radio program on WMCA last weekend — which has a largely Orthodox following — devoted the entire hour to a discussion about Nadler’s decision. Brenner said there were so many calls and emails that he couldn’t get to them all and that all opposed Nadler’s decision.

“People in general were very upset,” he said later. “People view the deal as dangerous not only for Israel but for America. The opposition cuts across geographic areas. … The phones were crazy — this is a very hot topic that people are passionate about.”

One of the studio guests, Mark Meir Appel, a social activist, said Nadler’s “decision was all about politics because he wanted to satisfy his constituency on the Upper West Side, which is liberal left-wing. … I believe very strongly that Congressman Jerry Nadler … betrayed us viciously and his entire record of what he did for the Jewish community goes out the window.”

The rhetoric has been so over the top that other members of the New York congressional delegation issued a statement Tuesday denouncing the vitriol. Signed by Democratic Reps. Eliot Engel, Nita Lowey and Steve Israel, it expresses concern that “both sides of the debate have resorted to ad hominem attacks and threats against those who don’t share their opinions. This is unacceptable. It is especially egregious to attribute malicious intent to decision makers who are thoughtfully debating the details and effects of the agreement. No matter where you stand on the Iran deal, comparisons to the Holocaust, the darkest chapter in human history, questioning the credentials of long-standing advocates for Israel, and accusations of dual loyalty are inappropriate.”

It added that all concerned should “refrain from attacks and focus on the substance of the agreement. Vitriolic rhetoric and threats distract from the thoughtful debate this important issue deserves and, in some cases, unacceptably perpetuate hate.”

Sen. Chuck Schumer (D-N.Y.), who has announced his opposition to the Iranian nuclear agreement, issued his own statement calling Nadler “one of the most steadfast supporters of Israel’s security.”

“We came to different conclusions on this decision of conscience, but to question one's loyalty to this nation or one's commitment to the security of Israel, our closest ally in the region, based on how one comes out on this issue is just absurd," he said.

A letter denouncing the personal attacks was sent to Nadler Wednesday by the chairman of the National Jewish Democratic Council, Greg Rosenbaum, in which he said “neither you nor any other elected officials should be subjected to any sort of personal threats or hateful attacks due to your votes."

“None of us are traitors; we have not betrayed our country, our people or our love of Israel," he added. "We are all allowed to have our own beliefs and our own convictions, and you and your fellow members of Congress should be applauded for your courage, rather than attacked for it.”

In an interview, Engel said that over the years controversial legislation has sparked angry calls from people “who say abusive things. And there are always some people – mostly from out of state – who say anti-Semitic things and crazy things. But the intensity this time is different. … It is coming from a few hotheads and people who are very emotional, and it obviously cannot be condoned. I wish people would realize we are human beings as well and make our decisions based on a lot of factors. If you don’t agree, you can show it at the ballot box.”

Abraham Foxman, national director emeritus of the Anti-Defamation League, sent an email to Nadler saying that although he disagreed with his decision, he admires Nadler’s “dedication, devotion and support for Israel and the Jewish people and the values our country stands for. You don’t deserve what is being thrown at you.”

Nadler represents the 10th Congressional District, which stretches from Manhattan’s Upper West Side to Greenwich Village and Battery Park City, and into Brooklyn and parts of Borough Park, Sunset Park and Gravesend. It is the district with the largest number of Jews in the U.S., and they represent a microcosm of the American Jewish community — from the liberal to the ultra-Orthodox, the latter of whom are almost universally against the Iranian deal.

The split in the community over the deal played out this week in the pages of this newspaper, and in stark ways. One full-page ad (on page 13), sponsored by American Parents & Grandparents Against the Iranian Deal, showed the Iranian and Israeli flags, with a bolt of lightning striking the Israeli flag. Its text, in part, reads: “Jerry Nadler represents more Jews than any other Congressman — He Claims To Be Pro-Israel So Why Is He Backing Obama And Iran?”

Another full-page ad (page 2), sponsored by the No Nukes for Iran Project, reads in part, “Todah Rabah [Thank You], Congressman Jerry Nadler. Thank you for leading the way to prevent a nuclear armed Iran. Kol Hakavod! [Well Done].”

Nadler’s stance on the Iranian deal has also rattled other elected representatives who serve his district. Councilman David Greenfield wrote on Facebook that Nadler is acting “against the overwhelming wishes of his Jewish constituency.”

(A spokesman for Nadler’s office said constituents are evenly divided on the issue, based upon phone calls and emails to his office.)

Assemblyman Dov Hikind, a Democrat who lives in Nadler’s district, told The Jewish Week: “I’m embarrassed that he represents me.”

He noted that shortly before announcing his support for the deal —known as the Joint Comprehensive Plan of Action (JCPOA) — Nadler released a letter he received from President Barack Obama that sought to reassure him about the concerns Nadler had raised during a private White House meeting.

“That letter was a joke – it was meaningless,” Hikind said. “I could just see Obama going back to the White House and saying, ‘Look at that stupid Jew.’ Obama bought him so cheap.”

Hikind said he is planning a demonstration this week in front of Nadler’s Manhattan office with about a dozen Holocaust survivors who will speak about the similarities today with what they experienced just during prior to the Holocaust.

At the same time, another group will stage a “Thank You Rep. Nadler” rally.

Competing groups have also announced demonstrations outside the offices of two local Democratic members of Congress who have yet to announce their position on the Iran deal: Reps. Carolyn Maloney and Gregory Meeks. And a rally is planned for next Tuesday outside the Manhattan office of Sen. Kirsten Gillibrand (D-N.Y) to protest her decision to support the deal.

Hikind said he is convinced that Nadler “will have a tough time getting re-elected next year because this is such a powerful issue.”

Attempts are now reportedly underway to find a candidate to challenge Nadler in a primary. But veteran Democratic strategist Hank Scheinkopf said trying to unseat Nadler — who has served in the House since 1992 after 12 years in the Assembly — would not be easy.

“This is a test of whether the Nadler old-style liberal Jewish theology is more powerful than the newly arriving Israel-supporting Orthodox community,” he explained. “The anger over the vote is not going to dissipate quickly, and the more pro-Israel portion of his community has both the resources and the time to put together candidates. They may not beat him but they would injure him.”

Nadler told The Jewish Week that Obama’s letter about the agreement — which he said he would have voted for even without the missive — “took care of three of the four issues” he had expressed concerns about when he met Obama. The first was Obama’s commitment in writing that the U.S. would never permit Iran to have a nuclear weapon. Second, a promise that mid-level Iranian violations of the deal would be met by “smaller sanctions.” And third, that a “czar or ambassador would be put in charge of implementing the agreement and watching for violations.”

Although Nadler said he was unhappy that the deal bars international monitors from personally inspecting the Parchin military complex, Nadler said the site is believed to have been used to weaponize a nuclear bomb and “without fissile material, building a bomb is irrelevant.”

Asked about the deal’s unfreezing of billions of dollars Iran earned in oil sales and the fact that money could be used to further Iran’s terrorist activities, Nadler said the money would be unfrozen even without American support for the deal.

“We realize Iran may use some of the money for terrorism, but we will substantially increase military aid to Israel,” he said. “This deal is designed to stop Iran from getting a nuclear bomb — it doesn’t deal with the other menacing aspects of Iran. … I was shouting about the threat from Iran before other people were. But an Iran without a nuclear weapon is much less of a threat than an Iran with a nuclear weapon. It is an existential threat to Israel … and with a nuclear bomb in its arsenal, it can inhibit a lot of responses and make terrorism a much greater menace.”