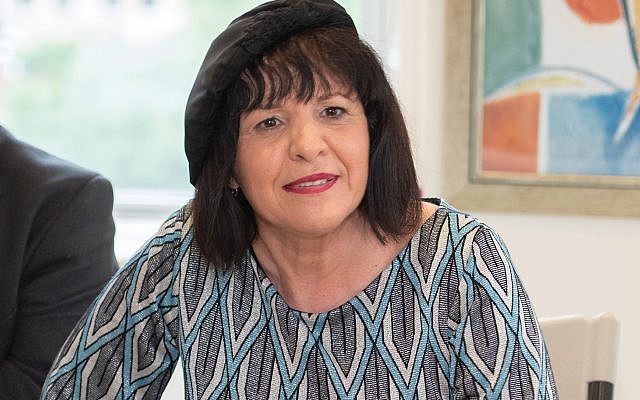 “I don’t feel like a symbol,” Bloch told a parlor meeting on the Upper East Side. Courtesy of UJA-Federation

Her name is Aliza Bloch.

A member of the country’s Religious Zionist (Modern Orthodox in U.S. terms) community, she has become a reluctant symbol of women’s rights and religious equality since last October, when she won a narrow, unpredicted victory over the incumbent charedi mayor of Beit Shemesh, a growing community of some 130,000 residents in the Judean Hills between Jerusalem and Tel Aviv.

The first female mayor of Beit Shemesh, she is the only Orthodox one among the 10 women who now lead Israeli cities. Her dark sheitel, and large beret whose color matches her outfit du jour, have become a familiar image in Israeli media.

As part of a series of meetings with philanthropists and leaders of several Jewish organizations over a few days here, under the auspices of the AMIT educational organization, she told a parlor meeting of UJA-Federation of New York supporters how she, a Sabra, the daughter of Moroccan immigrants, a career educator with minimal political experience, ran for mayor of Beit Shemesh six years ago, and dropped out early in the race. It didn’t deter her. She ran again last year, and in a major upset defeated the two-term officeholder who had the endorsement of most of the city’s prominent Orthodox rabbis.

A self-declared independent, she ran without a party affiliation.

Bloch, 51, who has been in office for eight months, also outlined at the UJA-Federation event some of the initiatives she hopes to implement during her five-year term: programs to bring business and industry to the bedroom community, to expand the city’s tax base, to keep young residents from moving away, to develop tourism attractions, to build more classrooms and sports fields and cultural centers and libraries … and to keep serving as a living bridge among the city’s once-divided religious and non-religious communities.

She outlined her philosophy of unity in a Hebrew-language book she wrote two years ago, titled “To Build a Bridge.”

“I am at the beginning of my journey,” she said at the event last week in an Upper East Side apartment sponsored by UJA-Federation’s Voices of Zion, a new educational/advocacy/fundraising initiative that has held a series of lectures. “My story is the story of Israel.”

Beit Shemesh, founded in the 1950s, was settled by new immigrants from Iran, Iraq, Romania, Bulgaria and Morocco, later from Ethiopia, the former Soviet Union and English-speaking countries. The city’s population has nearly doubled in the last decade, most of the newcomers from charedi backgrounds.

Religiously diverse, Beit Shemesh is a “microcosm of Israel’s religious kulturkampf,” according to the Times of Israel. “Battle for Beit Shemesh Is Over — and the Hareidim Won,” a headline on a 2016 Haaretz story about the city declared.

As relations in recent decades soured between Orthodox and secular, and between segments of the Modern Orthodox and charedi (so-called ultra-Orthodox) communities in Israel Beit Shemesh became a flashpoint. The city attracted negative publicity after several incidents in which so-called modesty police attacked and harassed girls and women whose garb they judged insufficiently modest.

In her 2018 campaign, Bloch reached out to the secular segment, on the left, and the charedi population, on the right, making her a national face of mutual respect and cooperation, and helping to change the image of Beit Shemesh.

“I don’t feel like a symbol,” she said. “I ran because of my ideas about how to run the city, not as the feminist candidate.”

A native of Kiryat Gat, Bloch has lived in Beit Shemesh since 1992. She has said she would not object if residents of secular neighborhoods drive on Shabbat, or if religious neighborhoods close their streets on Shabbat.

Laudatory articles in Israeli newspapers describe Bloch as a stereotype-shatterer and barrier-breaker, performing in the political realm what “Shtisel,” the popular Netflix series about a charedi family in Jerusalem, has done in pop culture.

“Mayor Bloch is truly a mayor of all the people. That in itself is an enormous accomplishment,” said Yaacov Haber, a U.S.-born charedi rabbi who lives in Ramat Beit Shemesh, part of the Beit Shemesh municipality. “As an educator she brings a new level of education to Bet Shemesh. She was indispensible in helping us begin Netzach, a new charedi school especially geared for olim [immigrants] and those that want the perfect blend of kodesh [holy] and secular studies with no political agenda,” said Rabbi Haber, who leads a synagogue geared to English-speaking immigrants and runs the Mosaic Press publishing firm.

The SRO parlor meeting audience asked Bloch why she ran for mayor, how she had achieved her historic victory and what her next plans are.

She ran last year, she said, because she had seen the city “stagnate” and the delivery of municipal services deteriorate. “Beit Shemesh is a city I wanted to save,” she said.

She won the election by retail politics, going door-to-door to the home of every Beit Shemesh resident. By talking about her vision for the city, instead of attacking the record of the incumbent. By ignoring the sometimes ugly taunts that the mayor’s supporters made about her ability to run the city. By using a campaign poster that did not include her photograph, to avoid antagonizing charedim who consider a woman’s public picture immodest. And by stressing the “80 percent” that Beit Shemesh residents of various political and religious stripes agree on.

According to news reports, Bloch, a known figure in Beit Shemesh for her decades as principal of the city’s Branco-Weiss High School, received the votes of nearly all the city’s secular and Modern Orthodox, and also received the support of many charedi voters.

Since taking office, Bloch said, she had opened a park-and-ride station near the Beit Shemesh railway station for commuters who travel to jobs in Tel Aviv and Jerusalem; instituted curbside pickups for the stacks of goods discarded in the days before Passover; lobbied for the admission of Sephardi students in traditionally Ashkenazi schools; appointed representatives of several political parties to her coalition; and started meeting with residents in various neighborhoods.

“We listen to [our constituents] — not just before elections,” she said. “Our city is relaxed now.”

Demographers predict that Beit Shemesh’s population will grow to 250,000 in the next decade, making it Israel’s fifth-biggest city.

“My mission,” Bloch said, “is to take Beit Shemesh from a place that became a symbol of conflict to a city that will be an example of coexistence. Beit Shemesh must be extreme in its moderation. We … our society … tried fighting. It didn’t work.”

Those in attendance at last week’s event seemed smitten with Bloch. There were applause and generous hugs. “She’s a hero,” one attendee said.

But maybe not as big a one as back home. Residents of the city regularly stop her for selfies, she said. When she visited Beit Shemesh schools on Purim, she found Aliza Bloch “clones,” students and teachers dressed up for the holiday. In the ultimate compliment, they had donned dark wigs topped by berets.